Conor Oberst and company experiment with familiar sounds on 10th LP 'Down in the Weeds, Where the World Once Was' 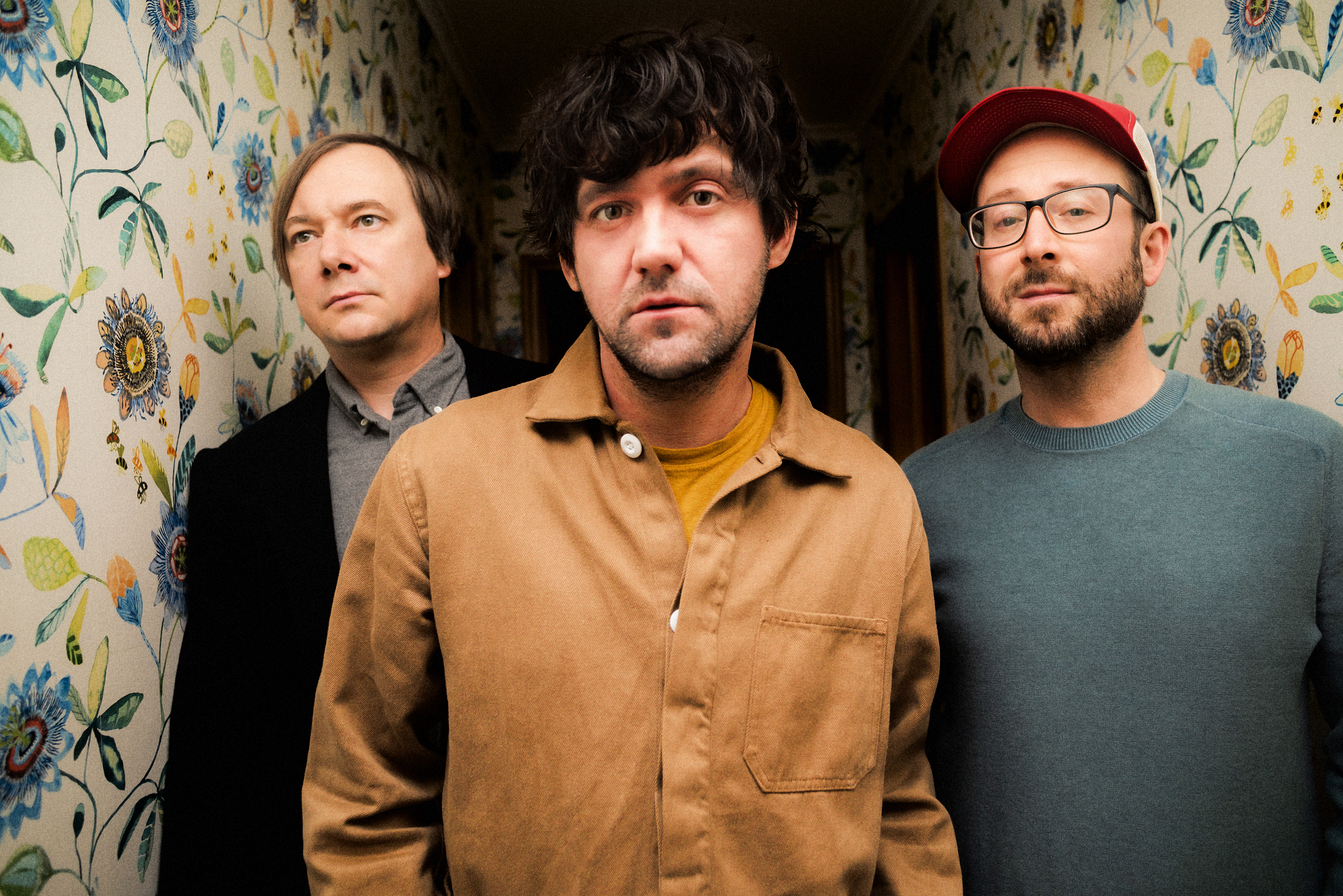 The last time Bright Eyes released an album, President Obama had only been in office for a couple years, Christian Bale was still Batman, and everyone was still whistling the chorus of “Pumped Up Kicks.”

But despite how much time has passed since 2011, the friendship between Conor Oberst, Mike Mogis, and Nate Walcott never waned. Hell, they didn’t even stop playing music together, as members of the trio worked together on everything from Oberst’s solo albums to the 2014 soundtrack for The Fault in Our Stars. None of them needed to revive Bright Eyes for their own careers. But the now-40-plus-year-olds clearly couldn’t abandon the project.

After roughly two years of writing, recording, and drinking at Oberst’s Pageturners Lounge in Omaha, the aptly titled Down in the Weeds, Where the World Once Was is out this week on Dead Oceans.

“It started out as kind of an experimental thing, because we didn’t have a record label and no one was really expecting a new Bright Eyes record,” Mogis tells SPIN over Zoom. “It felt a little bit more liberating just having no schedule and being able to work at our own pace. We’ve never had that level of freedom before. It’s nice to have autonomy.”

“It was an excuse to spend a lot more time with [Mogis and Walcott], which was really nice,” Oberst adds. “There was a little bit of gravity to the situation when we decided that we were going to do this, because it was like, ‘If we’re going to do this, let’s do it right and make something that we’re really proud of.’ It needed to be something where if you’re a fan of the band, you’d be excited to get this record. That might be the first time we ever thought of shit in those terms because before we just did whatever we wanted and didn’t really care. Even when we were just talking about going on tour — I think it’s kind of annoying when bands go on tour after a really long time and it just feels like a shitty money grab. I didn’t want to do any of that ‘We’re gonna play our old record from start to finish’ shit. If we were gonna do this again, then we needed to make new music and do what we do as good as we could. We definitely didn’t mail it in.”

Though it was created in a pre-COVID world, Down in the Weeds is a fitting representation of 2020 despair. Oberst’s insights aren’t as emotionally raw as they might’ve been a couple of decades ago, but they’re more intricate than ever before. It’s a fitting evolution and return: In some circles, discovering Bright Eyes has become a teenage rite of passage.

“I think it’s cool that with a record like Fevers and Mirrors — and I only know this because I see the royalties and shit — that every year there’s some amount of kids that get to high school, and someone gives them that record,” Oberst says. “It’s not something that I would necessarily listen to now, but it’s cool that it still appeals to that part of life. When I went to high school, it was like that first Violent Femmes record, and that was where you’d sit in the cafeteria — at the weirdo table or wherever. I think it’s meant that much to different kids over the last 20 years. I’m proud of that.”

“As we’ve toured over the years, the people in the front have always been the same age,” adds Mogis, who has produced and played multiple instruments on every album since 1998’s Letting Off the Happiness. “They’re always like 15 or 16 years old, whether it’s for The People’s Key in 2010 or Fevers and Mirrors in 2000. The demographics just kind of stay the same, and our original fans just keep moving back in the venue each time. I’m always stoked that new fans come into our Bright Eyes fold every year.”

While a new group of teenagers will discover Bright Eyes by learning ’00s classics like “Lua” or “First Day of My Life” on guitar, Down in the Weeds fits in with the band’s previous works well enough that others will seamlessly mix new cuts like “Forced Convalescence” and “One and Done” in with their repeat listens of old fan favorites like “Bowl of Oranges” and “Pull My Hair.” Particularly for an album released nearly a decade after its predecessor, everything about Down in the Weeds makes it feel feel and sound right at home with the band’s previous work. It actually sounds a little bit like each of the previous Bright Eyes records independently, and that’s not an accident.

They’ve never limited their options, instruments, or musical stylings: Who else would issue two acclaimed, opposite-sounding albums — 2005’s folky I’m Wide Awake, It’s Morning and the intricate electronica of Digital Ash in a Digital Urn — on the same day? Down in the Weeds is a refreshing change of pace, with the trio — plus special guests like bassist Flea and drummer Jon Theodore (The Mars Volta, Queens of the Stone Age, One Day as a Lion, Puscifer) — opening up their toolbox to utilize every sound from their past.

“We wanted to make a record that reflected our past records and fit into our catalog, but we didn’t want it to be a time machine kind of thing,” Oberst says. “We wanted to use certain touchstones from the past albums on the new album, like the orchestral element that Nate Walcott brings to it that’s really heavy on Cassadaga and Lifted [or The Story Is in the Soil, Keep Your Ear to the Ground] or the delays and production tricks that Mike likes to do from Digital Ash [in a Digital Urn], and even the blown-out acoustic guitar sound that reminds me of the older records like Letting Off the Happiness — and that came out in ‘98.

“We were trying to find little markers along the way, so it’s not like you’re listening to a brand new band,” he continues. “It’s not going to stick out like a sore thumb among all the other LPs on your shelf, but we wanted it to represent where we all are now in our lives because we’re obviously all getting old. I just turned 40, so I end up singing about different shit than when I was 19.”

“We wanted to make the music on this album connect with every other album in a way that felt cohesive and musical,” adds Walcott, who began collaborating with Bright Eyes in 2002 before officially joining as a multi-instrumentalist three years later. “On The People’s Key, we took the focus away from acoustic instruments, so on this record, it was a deliberate choice to not do that. We didn’t want to take anything off the table.”

Of course, it’s easy to look back fondly on certain aspects of each album, but it can be awkward listening to the missteps of your teenage or twenty-something self. A handful of years ago, all three Bright Eyes members might’ve cringed when listening to some of their previous material. But Mogis and Walcott have both gained a newfound appreciation for the bold choices they made as kids and the unique spins they put on each album up through The People’s Key. Their singer still enjoys some songs enough to play during his solo shows — although some tracks he’d rather not perform again.

“It’s a mixed bag,” Oberst says of the earlier Bright Eyes records. “I feel like some of the songs stand up better than others to my ears now, so those are the ones I’ll still play live. There are definitely some that I’d be embarrassed to sing now, and I hate the sound of my voice from the early days. I was never a trained musician, so I feel like it took me until I was 25 before I knew how to sing — but I started making records when I was 13, so there’s a lot of recordings out there that aren’t the most fun to listen to for me. I’m not disowning them or whatever.”

Regardless of which tracks still hold up for Oberst, the band’s impact — on both on the members and their fans — is undeniable, around 25 years after the project bloomed from suburban Nebraska. At this point, each has accomplished enough individually to merit working with the elites — whether it’s Oberst’s partnership with Phoebe Bridgers in the recent Better Oblivion Community Center, Walcott’s stint playing keyboards for the Red Hot Chili Peppers, or Mogis producing damn near every band that’s recorded in Omaha over the last 20-plus years — but there’s something about working together all these years later that still brings out the best in each of them.

“It’s the most comfortable situation on a musical level. I’ve collaborated with a lot of people over the years, but the nice thing with Michael and Nate is that we’ve been through so much together with our friendship and life-wise,” Oberst says. “We’ve obviously toured the world together so many times and made so many records, so there’s a lot of it that can just go unsaid. It’s basically just being on the same page. I don’t have to explain to them why I think something is cool or not cool in the studio. We’re pretty familiar with each other’s ideas and aesthetics, whereas if I was working with a totally new producer, I’d have to start at fucking phase one of explaining why I’m not into something. Even when we disagree, it’s an interesting disagreement because you both respect each other and have this shared history. It can be a real conversation.”

“I think the main thing is that we enjoy being in the studio together,” Walcott says. “Conor brought up the idea of us going about it in a more collaborative way where we would bring in some ideas for him to write through, which we hadn’t really done that much before. Going about it in a slightly new and experimental way made it exciting and fun, and I think we all have an appreciation for and enjoy the process of making a Bright Eyes record — as laborious and tedious as it can get sometimes.”

“For me, I think it’s surprisingly similar now as it was when we did Letting Off the Happiness over 20 years ago,” Mogis adds. “When we did that, I went to Conor’s parents’ basement because he was still in high school, and we made the record because we wanted to make music together. We hit it off pretty much instantly, and there was that kind of trust that started to be built there in whatever fucking year that was — 1997 maybe. I really enjoyed playing pedal-steel and giving the songs shape, and that’s the same thing as today. We’re older and wiser and more experienced, and we had more technical limitations back then so the records sound better now — sort of — but the reasons are all the same.”

The handful of singles from Down in the Weeds offer an intriguing preview, but they paint an incomplete picture. Despite the vast shift in music consumption to streaming and playlists since 2011, Bright Eyes weren’t interested in pivoting from the album format. You wouldn’t watch YouTube clips of a Scorsese flick. Likewise, Down in the Weeds is made to be absorbed in full.

“If you got the attention span, I just want people to listen to it at least once from start to finish,” Oberst says. “It’s 53 minutes of your life, so if you can watch a bunch of stupid Netflix shows for like an hour, you can sit down with this for 53 minutes. That’s the way we intended it.”