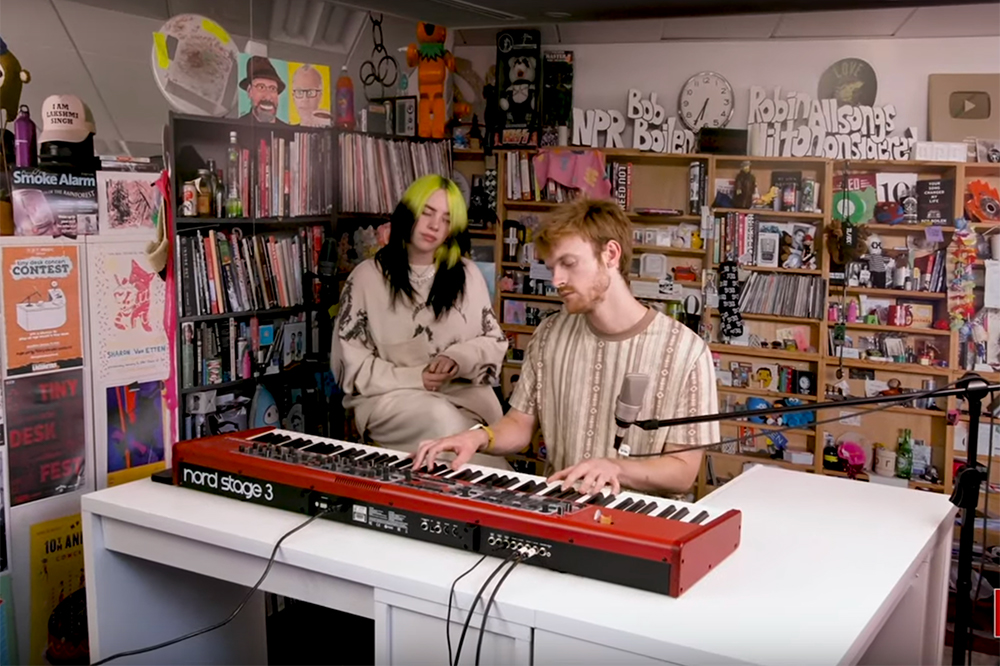 With many, including the NPR Music staff, working from home, musicians have been recording themselves performing the iconic Tiny Desk sets themselves. Whether it’s been in their homes or in the Caribbean, fans have been treated to a variety of looks in the series.

But Billie Eilish and Finneas brought us back to tradition — kind of. In the latest episode of Tiny Desk at-home, they are seen sitting in what looks like the NPR Music office in Washington, D.C. However, as editor Stephen Thompson explained, “the NPR Music staff can’t set foot in the building that houses Bob Boilen’s desk.”

After performing “My Future” and “Everything I Wanted,” the camera starts to pan out and show that it’s actually a set that was built to look like the original Tiny Desk set up. And what we thought were the books and trinkets on the shelves were actually “a cardboard cutout.”

“So obviously, we’re not actually at Tiny Desk because this is a cardboard cutout of it,” Eilish said, “but it’s still real. It’s just not in-person real. But I’m honored to be here. I’ve been watching this for years. We have both been watching them years.”

She also added, “quarantine’s been weird.”

“I know you all feel the same,” Eilish said. “It’s been weird. We don’t know how long it’s gonna go. There’s barely anything that feels like there’s any hope in, but I think the future is something to be super hopeful in… we’ll be OK one day, maybe not right now.”

See Thompson’s full statement about Eilish and Finneas’ performance below.

“The Tiny Desk is working from home for the foreseeable future. Introducing NPR Music’s Tiny Desk (home) concerts, bringing you performances from across the country and the world. It’s the same spirit — stripped-down sets, an intimate setting — just a different space.

Aug. 26, 2020 | Stephen Thompson — It didn’t take long for Billie Eilish to become one of the biggest pop stars in the world, sweep the Grammy Awards’ major categories and release the latest James Bond theme. And today, at just 18, she and her brother, Finneas, have accomplished what no one has been able to do for five and a half months: perform a Tiny Desk concert in what certainly appears to be the NPR Music offices.

Of course, due to safety concerns, even the NPR Music staff can’t set foot in the building that houses Bob Boilen’s desk. But if you look over Eilish’s shoulder, there’s no mistaking the signs that she’s appearing at the Tiny Desk in its present-day form: On the last day before staff began working from home, I took home the Green Bay Packers helmet that sat on the top shelf — the one Harry Styles had signed a few weeks earlier — for safe keeping. In this performance, that spot is empty.

So how the heck did they do it?

Honestly, it’s best that you watch the whole video to experience the extent of the technical feat — which, in the spirit of Eilish’s Saturday Night Live performance, they’re willing to share with you. And thankfully, we still have our ways of photographing the desk, even if the room has fallen silent.

So settle in for a welcome jolt of Tiny Desk innovation, not to mention two of the excellent standalone singles Billie Eilish has released in the past year: “my future” and “everything i wanted.” And, seriously, be sure to watch until the very end.”