Lollapalooza was forced to cancel the 2020 festival due to the COVID-19 pandemic, but organizers announced a creative workaround for fans craving live music. 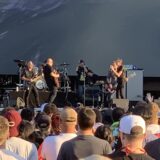 Chicago Mayor Lori E. Lightfoot will appear throughout the event to co-host discussions with Farrell and LL Cool J. The livestream will spotlight causes important to Lolla history and Chicago itself, the festival’s longtime home.

In much more depressing news, Lollapalooza co-founder Marc Geiger recently predicted that live music — in its traditional forms — won’t return until late 2021 or “more likely” 2022. “It’s my instinct, that’s going to take a while because super-spreader events – sports, shows, festivals…aren’t going to do too well when the virus is this present,” he said.