There was a time when live music was all there was. No shaky mobile phone camera videos of concerts uploaded to Instagram Stories or YouTube. No hissing bootleg tapes recorded out of the lint-ridden pocket of a teenage concertgoer’s knitted wool sweater. No sounds emanating from a needle against a scratched-up piece of easily shattered vinyl. And originally, JARV IS… was going to be just that – a live music experience with little connection to a medium of plastic permanency.

Thankfully, though, Jarvis Cocker, the bespectacled, lanky, former frontman of mid-’90s British indie band Pulp, and now frontman of JARV IS… decided against that. Instead, his band just dropped the wild, claustrophobic, profound Beyond the Pale, which is part pandemic record, part tribute to live music, and part musings on humanity’s origins.

How it happened to get there, though, is an interesting tale. At the end of 2017, JARV IS… got together after Cocker was asked to perform in Iceland at Sigur Ros’ Norður og Niður festival, so a band was formed. By the time the ex-Pulp frontman/guitarist, with harpist/keyboardist Serafina Steer, violinist/guitarist Emma Smith, bassist Andrew McKinney, synth player Jason Buckle and drummer Adam Betts took the stage, what they had to play didn’t necessarily fit into a perfect concert mold. “The songs weren’t quite finished,” Cocker tells SPIN via phone from England during the early days of the 2020 coronavirus lockdown. “So then, I thought, ‘Oh, this could be a great concept, this could be the next stage. This could be the post-recording group.'”

“Post-recording” – as in the next stage of evolution in the pop music word. Idea No. 1 of what that might look like was making music that would only be available to hear live (at a performance). “But then, I suppose, like I say, having been brought up as someone who’s spent of most of his adult life making records, I kind of can’t help but think of songs as things that you work towards perfecting,” Cocker, whose last batch of original songs was 2009’s Further Complications, recounts. “And so, all the time we were playing these concerts, we were recording them, and I was listening back to the recordings and thinking, ‘Oh, yeah. Yeah. That one’s nearly there.’ ‘That one’s almost done’ – as if it was like a cake in an oven or something.”

The second idea in his evolving “post-recording” music concept was following up some U.K. dates in Spring 2018, and a U.S. festival appearance that October with … well, making a record. The thought was, however, that the record the band would make would only be available for those who attended a show.

“We kind of did that with the first song that we released which was ‘MUST I EVOLVE?’ So, the recording had come from a concert that we did in a cave,” Cocker continues. “A lot of the ideas for the record and that song as well had come from reading this book about life in caves and how that was maybe the donning of modern consciousness. So, there’s a book called The Mind in the Cave. I actually quote that book title in the lyrics for that song – you’re probably starting to get the point now that I like concepts – so, the fact that we recorded this track that was about human consciousness taking shape in caves, in an actual cave, was exciting. It seemed like this whole kind of thing was coming into focus and I got excited. I get excited about ideas, I suppose.” 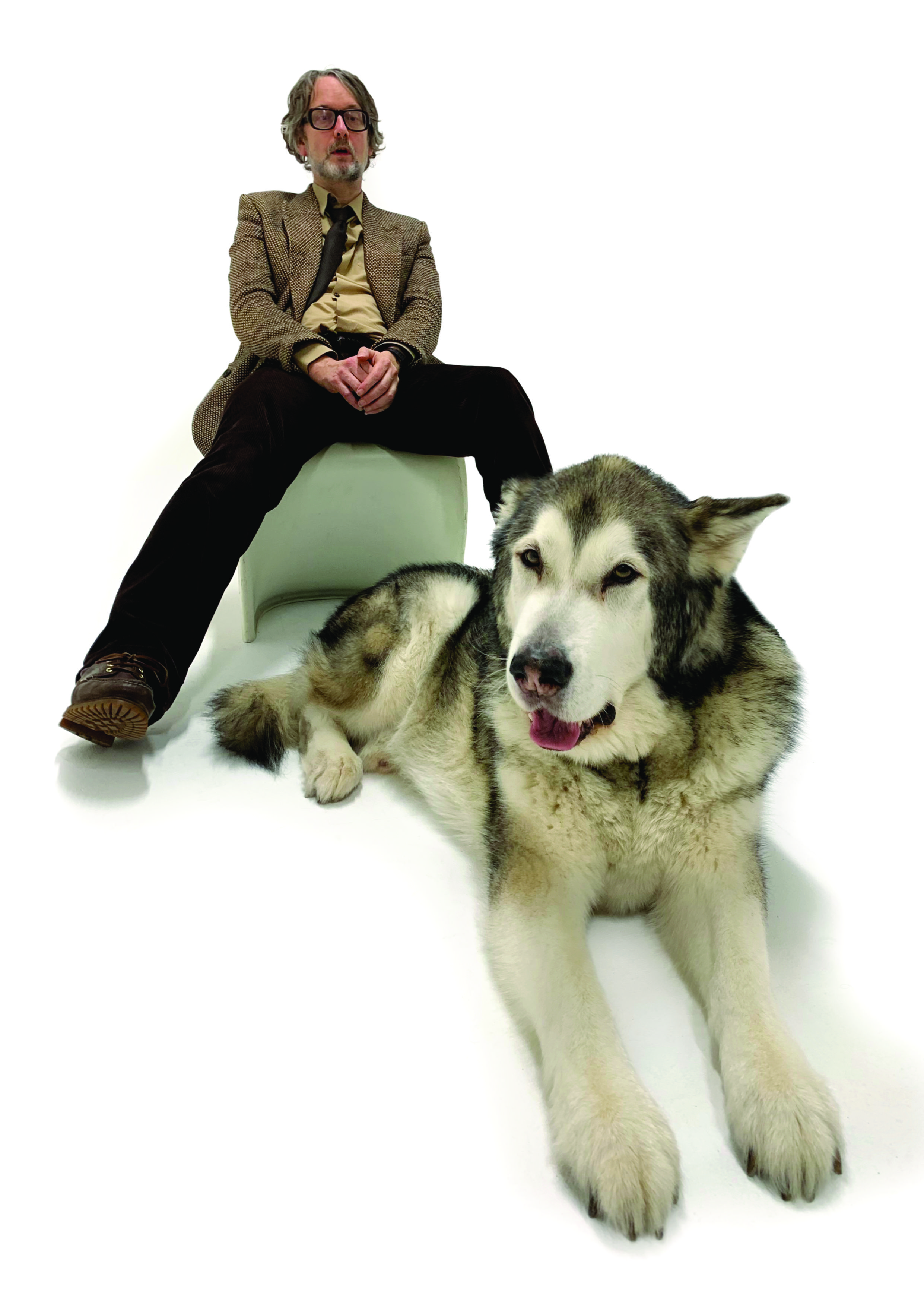 Eventually, those plans gave way to doing a traditional record release, but not in the usual fashion.

“It’s a mixture,” Cocker said of how live recordings from JARV IS… shows intermingle with traditional recordings to make up Beyond the Pale. “I like to think we’ve invented a new hybrid form. There are three tracks where the basic track comes from the live show. So there’s the ‘MUST I EVOLVE?’ we’ve mentioned already and from that same show in the cave, ‘Sometimes I Am Pharoah,’ and the song ‘Children of The Echo’ – the last one on the record. That was from when we played at the Primavera festival in Barcelona just about a year ago.

“The other songs, like ‘House Music All Night Long,’ ‘Swanky Modes’ and ‘Am I Missing Something?’ – the arrangements for those songs were worked on live. … We were playing them live and I was listening to the recordings, but there was never a recording that was quite good enough to be able to use. So, we just took the arrangements that we’d worked out live and then we recorded those in the studio. But it’s still the form of the song [that came] from a live performance.”

Speaking of “House Music All Night Long,” – it’s a synth-driven late-night number that’s resonated with self-quarantining music fans thanks to Cocker’s lyrics about a night of unwanted solitude in one’s domicile with only records for company.

“That song was all about this weekend that happened to me like two years ago, where I was stuck in London. I was in this house, but the people who’d lived there had gone. I was just on my own and everybody I knew seemed to have left town. I was jealous because other people I knew had gone to this dance music festival in Wales and I was just stuck there with nothing to do just feeling sorry for myself alone, and I kind of thought, ‘I’ve got to stop feeling [sorry] for myself. I’ve got to get through this,'” he recalls. “I remembered that I bought this secondhand keyboard from Portobello Market a couple weeks before, so I went and got that out of the cellar and set it up in the living room and I started playing and I came up with the chord sequence for that song. The fact that I’d done that – I was stuck in a house, but I was thinking about all these friends who were at a house music festival just gave me the idea for the words.”

It’s the kind of jam that live, can go on for a while, and during those shows – long before Covid-19 shut down the concert industry – gave Cocker an opportunity for a first.

“That was one of those songs that you play live, the first time we played it which is only about a year ago really, and the audience really kind of latched on to it. And the end bit, I ended up doing my first-ever crowdsurfing in my whole life. I don’t know what happened to me,” he reveals.

“Yeah. I kind of went out into the audience and then I suddenly thought, I don’t know why, I just jumped on to them,” he laughs. “Obviously it’s kind of ironic discovering crowd surfing just before a pandemic shut down when now it’s impossible. Crowd surfing is definitely not social distancing. I’ve been thinking about that also the method of how we recorded the record.  I’m really glad we did it that way because it’s going to be a long time before you could record a record like that again because I guess it’s going to be a long time before normal concerts and shows are possible again.” (The JARV IS… U.K. tour originally scheduled earlier this year has been rescheduled for November…for now).

Fittingly, the album is more than about just being a “post-recording”-inspired experiment, or Cocker’s observations about people, or even humanity’s connection to caves. It also goes deep as a sort of meditation on the internal that he began exploring with the album’s third track – “Am I Missing Something?” – which he started working on seven or eight years ago.

“And so if you start with a song called ‘Am I Missing Something?’ then I guess that sends you off in a certain direction. And maybe I’m at a time in my life where I kind of think that. I’ve lived a certain amount of time, I’ve done quite a lot of things, and so then you think to yourself, ‘OK, what else is there to do? Am I missing something? Is there something that I should do, or is there something missing within me? Is there something still to look for?’ It could be something out in the world, or the other idea of it is maybe there’s something within you that you get to discover,'” he shares.