Our monthly report on new hip-hop 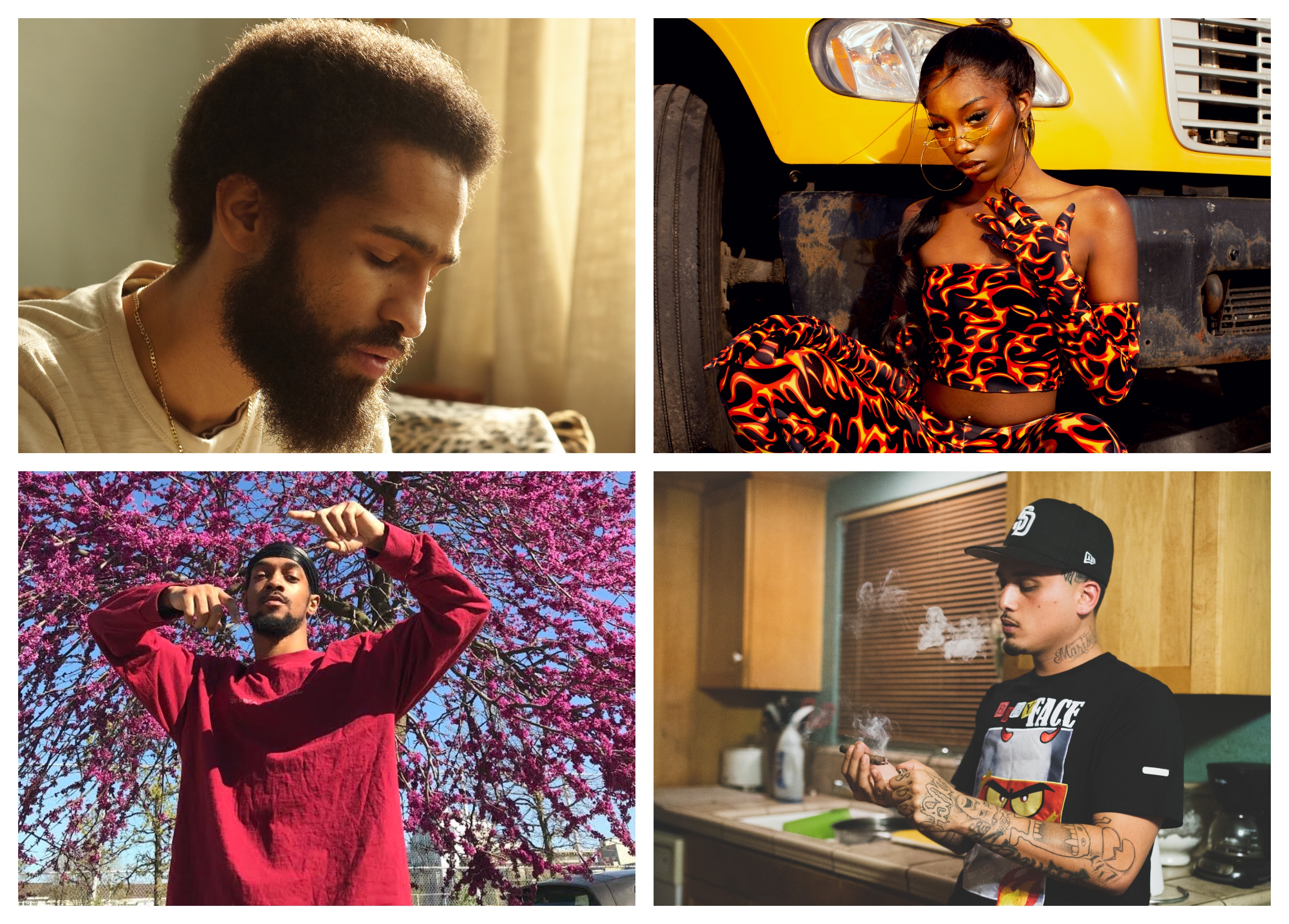 Did you really listen to “Country Grammar?” Nelly hit the top of the charts while couching the promise of a drive-by in a children’s song. In the second verse, the St. Louis native slyly lets the world know that he and the Lunatics wouldn’t hesitate to shoot up the club.

Two decades later, 30 Deep Grimeyy has no patience for sugarcoating the violence in St. Louis. In 2019, CBS declared the Missouri city the most dangerous in the U.S., citing a homicide rate 10 times the national average. If you listen to Grimeyy’s slim catalog, you’ll have a frontline perspective from a 62 Crip. He raps fatalistic tales of retaliation with raw emotion, naming a dead homie for every gun aimed at the opposition. This is pain music, PTSD music. Lean and Percocet are not enough, so music has become therapy.

Grimeyy essentially blew up with his first release, Splash Brothers, which was a joint tape with NWM Cee Murdaaa. Singles “No Cap” and “Dead Goofies” racked up millions of views/plays, but I’d argue that “Rockstar” is the most affecting song on the album. Grimeyy balances dead-eyed menace with a heavy heart. Reminiscing about throwing a frisbee and playing Xbox shouldn’t remind you of all the friends you lost in your youth. For Grimeyy, though, nostalgia is short-lived.

This month, Grimeyy dropped his solo debut, Grimeyy 2 Society. It’s one of the best rap albums of 2020, a refinement of all that made Splash Brothers so captivating and sad. Though the Lil Baby-assisted “Loose Screw” will probably be the biggest single, “Say Cheese” remains the strongest. This is Grimeyy showing you all sides:  the violence and pain, the struggle and success, the lingering possibility of more violence. The list of the departed is tattooed on Grimeyy’s skin, but he’s making money now: “All I talk is money, dropped a bag on my teeth / They drop a bag in my city, you’ll be dead in a week.” Hopefully, one day soon, the homicide rate drops dramatically in St. Louis. Maybe then Grimeyy won’t have to look over his shoulder with each new purchase.

Of late, Brooklyn drill had dominated much of New York’s rap coverage. While there are many talented rappers within that scene, their shadows have sometimes obscured a vibrant independent rap community outside of it. 25-year-old Flatbush native AKAI SOLO belongs to that camp. If you enjoy Billy Woods and Earl Sweatshirt, both whom Solo has collaborated with, SOLO should be in your Spotify, Apple Music, Bandcamp collection, etc. These are introspective and dense stream of consciousness raps influenced by DOOM and Def Jux. Allusions to anime find their way into both personal and societal revelations. At times, his voice and delivery remind me of a slower, slightly more sedate RZA. The bass in his voice and the conviction therein never wavers.

SOLO first garnered wider attention with 2019’s Black Sand, his excellent collaborative album with Pink Siifu. Since then, he’s released four projects. Eleventh Wind, an eight-song EP that runs just under 20 minutes, is the latest and one of the most compelling. SOLO has said this is his most “accessible” project, and by that, I think he means direct. Case in point: “Nebula.” Over a murky, distorted piano loop and clipping percussion, Solo vows that he “can’t say things without utility anymore.” It’s the last track on the album, and it serves as a mission statement for him moving forward.

Alabama has been bereft of a mainstream rap star for years. Rich Boy’s ride ran flat after “Throw Some D’s” in 2007. Yelawolf has a devoted following, but his southern outlaw narratives have never been crossover hits. The late Doe B was killed in 2013 at 22 just as he was gaining popularity outside of Montgomery. Enter Flo Milli. “Nasty and trill” from Mobile, the 20-year-old has become one of the biggest rappers of 2020 by every metric.

Following the TikTok success of “Beef FloMix,” Flo Milli’s remix of Ethereal and Playboi Carti’s “Beef,” she released a series of increasingly promising singles (e.g., “In the Party,” “Not Friendly”). Most of them appear on her debut project, this month’s Ho, why is you here? Flo Milli raps like a hybrid of Nicki Minaj and Rico Nasty—both admitted influences—but that stylistic middle ground between Barbie and Bratz doll is unique to her alone. On every song, she raps with Regina George levels of swagger and sass. Every line comes with an eye-roll, a glare, or an inscrutable wink. She doesn’t suffer fools, broke men, or hating women gladly.

“Weak” is the latest song from Ho, why is you here? with another inspired music video. Here, Flo Milli inverts the traditionally male-lead trap narrative: she is the boss, and shirtless men count every dollar. With or without the video, “Weak” is also one of the strongest songs on the project. For those pining for the chipmunk soul of The Heatmakerz and “the old Kanye,” the beat from J White Did It offers an excellent trap-leaning update. In both verses, Flo Milli dismisses potential romantic partners for everything from mansplaining to being “in [their] feelings” with nonchalance and borderline disgust. However, “Weak” succeeds most because of the hook, where Flo Milli seems to rock from one line to the next: “They’ve been textin’ me all week / Just let me be (Let me go) / Blowin’ me up, I’m tryna sleep / I ain’t your freak.” One listen to “Weak,” and there is no question why Flo Milli’s here.

For some households, rap music is a rite of passage, the family business. Such was the case with Lil Weirdo. His father produced for San Diego rappers throughout Weirdo’s childhood. (According to ModernRaps, his dad helped produce Damu’s “Keep It Real”.) Despite only rapping since 2017, Weirdo raps with the assurance of more practiced peers. Recently, it’s as if he’s tapped into the skills of every rapper he heard in his father’s studio. His flow is relaxed but athletic, bolstered by the bass of his SoCal accent. He’s making some of the best street rap from Linda Vista, the San Diego neighborhood patrolled by Rollin 60s Crips and LV13. Every single since December 2019’s  “No Cosign,” which has over a million views, has been better than the last.

“On My Line” is the latest Lil Weirdo track to pop on YouTube, with nearly 350K views since mid-June. It’s an amalgam of different eras of West Coast rap, a slap with the deep, woozy bass of Mobb Music, the ominous melodies of new L.A., and the crushing, almost hydraulic percussion of G-funk. It’s also the perfect soundtrack for Weirdo’s cold-hearted rhymes. For him, business and protecting the business takes precedent over all romance. He doesn’t want to hold hands or slow dance. Throughout, Weirdo switches cadences at whim without losing the beat. He’s a “Natural.” If labels aren’t on his line yet, they will be soon.

In the day-to-day trenches of adult life, there is a thin line between the simple and profound. Often, they are one and the same. Simple truths become mantras, shields against seemingly endless personal and economic adversities. Some artists have a gift for rendering those truths in terms that resonate instead of ringing hollow. lojii is one of them.

The 30-year-old Philadelphia native has spent his brief career distilling the trials of adulthood and independent rap life into simple yet profound songs. His voice, low and deep and slightly raspy, gives greater weight to each syllable. His 2017 album Due Rent with producer Swarvy remains an affecting portrait of 99% life, an aural screenshot of negative bank account balances scored by production that splits the difference between hip-hop and neo-soul. Even when roaches scale his empty pockets, though, lojii finds hope for a future where rap pays the bills.

lojii’s 2020 album lo&behold doubles down on that hope as he realizes the import of patience. In each song, he works on his mental health in real-time, forges a new shield against the socioeconomic stresses of Black life in America, and the slow ascent to rap stardom. “patience” is the first lo&behold song to receive a video and the core of the album. Like the best lojii songs, no line is wasted. Each one confirms that “all it takes is patience” to make it through each day and write another verse.