Angel Olsen will release her fifth studio LP, Whole New Mess, on Aug. 28 via Jagjaguwar. She teased the album with a stark, eerie video for the newly issued title track. Watch below.

The single frames Olsen’s dreamy croon around electric guitars with heavy reverb. “Won’t be long now before it’s really showing / It’s every season where it is I’m going,” she sings. “I stretch my bones out on the floor / I think I’ll really do the change.”

“The reality is that artists are often never home so health, clear mindedness and grounding is hard to come by,” Olsen said of the track in a statement. “The song is a mental note to try and stay sane, keep healthy, remember to breathe wherever I happen to be, because there is no saving it for back home.”

The clip, directed by Ashley Connor, shows Olsen standing in front of trees at night, her movements illuminated by flashlight and an occasional red glow. 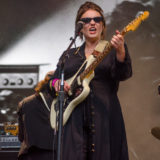 Olsen — who is booked to perform Tuesday night on The Tonight Show Starring Jimmy Fallon — recorded Whole New Mess in October 2018 at a unique church-studio, The Unknown, in Anacortes, Washington. The record features stripped-down versions of several tracks that appeared on her previous project, 2019’s All Mirrors., which SPIN named one of the year’s 10 best.

“I hadn’t been to The Unknown, but I knew about its energy,” she said in a statement. “I wanted to go sit with the material and be with it in a way that felt like a residency, I didn’t need a lot, since it was just me and a guitar. But I wanted someone else there to hold me accountable for trying different things.”

The songwriter noted that Whole New Mess was inspired by difficult changes in her personal life. “I had gone through this breakup, but it was so much bigger than that — I’d lost friendships, too,” she said. “When you get out of a relationship, you have to examine who you are or were in all the relationships. I wanted to record when I was still processing these feelings. These are the personal takes, encapsulated in a moment.”