Pearl Jam honored the nine lives that were lost on the 20th anniversary of the Roskilde Festival tragedy.

“It’s been 20 years since that day.
A normal festival show day…show up 5 hours ahead. Wait for your slot.
I barely remember it…
Sunny, I think.
Lou Reed played, I think.
Then rain and wind.

But nothing has been the same since.” 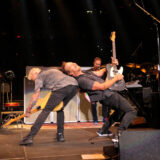 On June 30, 2000, Pearl Jam took the stage at the Danish music festival. So many fans packed the crowd, especially the mosh pit, so much that Eddie Vedder implored the crowd to step back to give space to those who were all the way in the front. However, that didn’t happen, and nine men, between the ages 17-26, were suffocated or crushed by the rails and died.

“An unexpected moment intervened that forever changed all involved,” Gossard wrote on behalf of the band. “The 9 young men who were trampled. The lives of their families and loved ones who had to endure imagining their deaths over and over and the reality of never seeing them again. Every person at the festival who witnessed what was happening and tried to do something, maybe pulling someone up, or not being able to…”

In SPIN‘s August 2001 feature on Pearl Jam’s decade-long oral history, Eddie Vedder admitted that he never really spoke about what happened at Roskilde. “It’s the most brutal experience we ever had,” he said in that interview. “I’m still trying to come to grips with it.”

He also added, “The intensity of the whole event starts to seem surreal, and you want it to be real. So you sit there with it, and you cough it up and re-digest it. You still want to pay respect to the people who were there or the people who died and their families. Respect for the people who cared about you.”

“It's been 20 years since that day. A normal festival show day…show up 5 hours ahead. Wait for your slot. I barely remember it… Sunny, I think. Lou Reed played, I think. Then rain and wind. But nothing has been the same since.” Read the full statement at the link in bio.