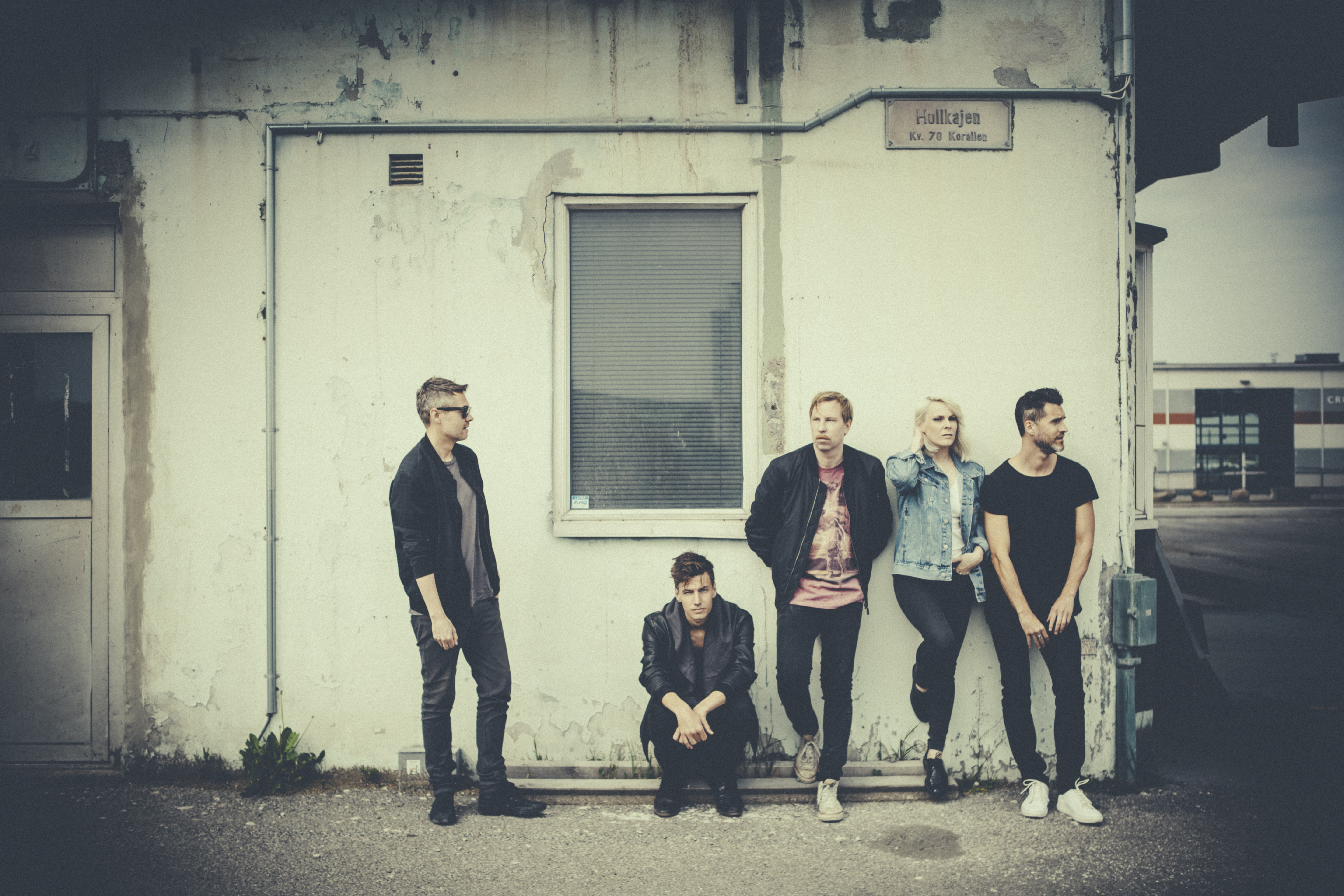 It was the KB Theater, alright, no doubt about it, Maja Ivarsson recalls thinking one recent Friday night in April. The same red-hot nightclub in her Swedish hometown of Malmo where her band the Sounds had first cut its punky power-pop teeth over two decades earlier — same layout, same seating, same beer-dispensing bar. But as the group took the stage for its full-production livestream “Safe and Sound” concert to premiere its rollicking new Things We Do for Love hookfest — which was out on Friday (June 12) — there was just one small difference. Looking out on where the adoring crowd should be, the kinetic blonde sparkplug was rattled at first.

“Because there was obviously no one in the audience, so it was super-strange because we’ve played that club so many times,” she sighs. “But I tried to remember that there were a lot of people watching us, all over the world, on camera, even though it was odd playing all these old hits of ours where you know people are going to jump and shout and clap their hands. But there was nothing — just dead silence.”

Still, the show — however cleverly re-imagined and recalibrated — must go on in our new coronavirus-constricted times, where jam-packed concerts are quickly becoming a thing of the past. And an album as good as “Things,” its sixth set, needs to be promoted, come hell or high water. It’s the Sounds most solid — and retro-minded — effort in years, opening on the bubbly thumper of a title track, and bounding headlong into the kitschy synth-rocker “Safe and Sound,” a shimmery power ballad called “Changes,” the sinister creeper “Hollow,” a slinking “Fingertips,” and the punk-powerchorded “Stay Free,” which hearkens back to early Sounds staples like “Living in America,” with its now-ironic tagline of “We’re not living in America/ And we’re not sorry.”

And the KB gig — proposed by theater management itself — was the most expeditious way of delivering the message. How did Ivarsson make it through, maintaining her hurricane-velocity momentum the whole time? She chuckles. “Bourbon,” she replies. “Lots of bourbon. Bourbon will always do it for me!”

SPIN: How is your son, Dante?
Maja Ivarsson: He’s in preschool. He’s five. But we don’t have the same shutdowns or closedowns as you guys. So pre-schools are open, restaurants are open, everything is semi-normal here in Sweden. A lot of things are different, of course — I’m not seeing my mom, so there are some restrictions. And you can’t sit too close to each other at the restaurant outside patios and stuff like that. But most of the things are still the same.

How are you and the band doing?
Everybody’s doing really well. None of us have had any symptoms, or at least we think everybody’s healthy. But it’s kind of strange. Adam Schlesinger died, and that is so horrible. And it wasn’t until then that I finally thought, “This thing is really creepy.” It kind of crept up on you in a scary way, but that day when I found out that he had died, it became too real. It’s a strange time that we’re in, and I don’t know — maybe it’s karma, getting to us all.

What’s your average post-pandemic day like now?
I’m actually in the studio working a lot. I’ve been writing a lot of music lately. So I drop my kid off, I take my bike and I ride to the studio, then I work from 9:30 until 2:45, and then I go pick up my kid, we go to the courtyard and we play for a bit, make dinner, and then go to bed. And then I do the same thing the next day. I have a good routine, and it’s very good for being creative — you become very disciplined when you only have a certain amount of hours.

Who all is sheltering in place with you in your household?
I’m seeing a man right now. I met him a year ago, and his name is Daniel. So it’s me, Dante and Daniel at the moment, which is really nice. Because I’d been single for so very long. And at first, it was easy for Dante and he was really good with it. He was quite curious, and it was fun for him to have a guy around. And then it became difficult for a time because then he wanted me all to himself. And then it was going back and forth. But most of the time, I have to say, it’s been going really well. Which is the only reason I would be sticking it out with this man — if it wasn’t working out with my son, I wouldn’t be staying with him, because my #1 priority is my kid. To live together under one roof with a new person is difficult at times, but it also has its benefits, for sure. It’s always nice to come to someone.

In Sweden, the country’s chief epidemiologist Anders Tegnell speaks calmly and reassuringly to the populace every day, unlike here in America. Has he got it right?
I think so. I really do. I think that the big difference between Sweden and many other countries is that we don’t need laws or or military police to tell us what to do. If we get restrictions, we follow them. We’re quite disciplined people. If we get recommendations, even, we simply follow recommendations. If they say don’t do this and don’t do that, most people follow it. Obviously, there’s always gonna be somebody who doesn’t do it, and they will be threatening to shut down some restaurant that doesn’t follow rules. But we’re much more of a social-distance kind of people to begin with — we’re not very physical, in the same way that Italians are. And I love America, I really do. But we do have different mentalities. But we’re only twelve million people here, and we’ve been living under this social democracy for some time. So I think we have a bigger mindset of the whole community, the whole collective group of people, instead of just the individual. And that goes double for this time that we’re in right now. I think we really are looking out for each other.

First, let me congratulate you on writing “Hollow” and lines like “I’ll be your shadow, I’ll leave you all hollow” — the first song written from COVID-19’s perspective!
Ha! Yeah. If I only knew! And “Safe and Sound” was another title that fit in perfectly with this era, and I had no idea it would be so spot-on when I wrote it. That “Hollow” song is obviously not about the coronavirus, but it fits very well into that framework. And I’ll be happy to give it to the virus if it wants it.

“Home” could be a huge feel-good hit this summer.
It took on a lot of shapes during the writing process. Me and Felix (Rodriguez, guitarist) started out with me wanting to sound like Yazoo — a big-time favorite of mine — but nobody else in the band really got it. So we added more organic instruments to it, and it took on a better shape at the end.

The whole album has kind of a more mature, wise new take on the traditionally bratty Sounds approach.
I like that. And I think that comes from us having been doing it for some time, I guess. But I also think it’s interesting, because for the last couple of records before this, I didn’t write as much. I did that in the early days, but for the last couple, I did my part, but I never was the main writer. But I am for this record, together with Fredrik (Blond) our drummer — we wrote most of it. Not all of it, obviously Felix and Jesper (Anderberg, keyboardist) wrote some, as well. But it started out with just me and Fredrik in the studio, because Felix was off training to become a real estate agent. He was fed up with the music industry, and he wanted to do something else — he wanted a real job for a while until he realized that it’s no fun. And Jesper became a dad, so all of a sudden it was just me and Fred in the studio, so we could do whatever we wanted to do.

“Stay Free” feels like classic Sounds.
That’s one of the first ones that Fred showed me. He was like, “What about this one?” And I said, “I like it! It’s very punk, very straightforward.” So we just made that happen very quickly. Then me and Felix started to write some for this other duo that we’ve started, Cruel Me and You, a duo that took us back to the ‘90s euro-techno scene that we also grew up with, and we wanted to explore our old influences. So it was good fun, but it also opened up another door for me to start writing more and more. So that’s how “Safe and Sound” came about — we started writing it, and we realized that it sounded more like a Sounds song.

How are the latest songs you’ve been composing?
Right now, the latest one I’m working on is about how hard is about having an argument with someone, and how difficult it is when you sometimes say something in anger or in rage that you didn’t mean to come out, and how you have to quickly backpedal and make it right. The working title is “Words Don’t Always Come Out Right.” I only have a verse right now, but we’ll see what the chorus turns out to be.

(Dante walks in, murmuring to his mother in Swedish, and she pauses to answer him.)

Ah! Dante just found a hotel room key in his pocket from last weekend — it’s from Stockholm. Me and Dante and Daniel traveled there because I had to go up and do some promotion for the album. And I was asking myself, “Is this really a good idea?,” because Stockholm is the (coronavirus) epicenter in Sweden. So we took the train, and there were only three other people in the car. And in Stockholm, we had a private driver, and a hotel suite on a floor that only had us, so we took every precaution that we could. And I didn’t shake anybody’s hand, I didn’t give anybody any hugs, and we were sitting far away from anybody else at restaurants. So we did everything we could, and I was still able to promote the album that we put all this hard work into. So we are still, ahem, “Safe and Sound.”