Their major-label debut and most iconic cover image turn 30 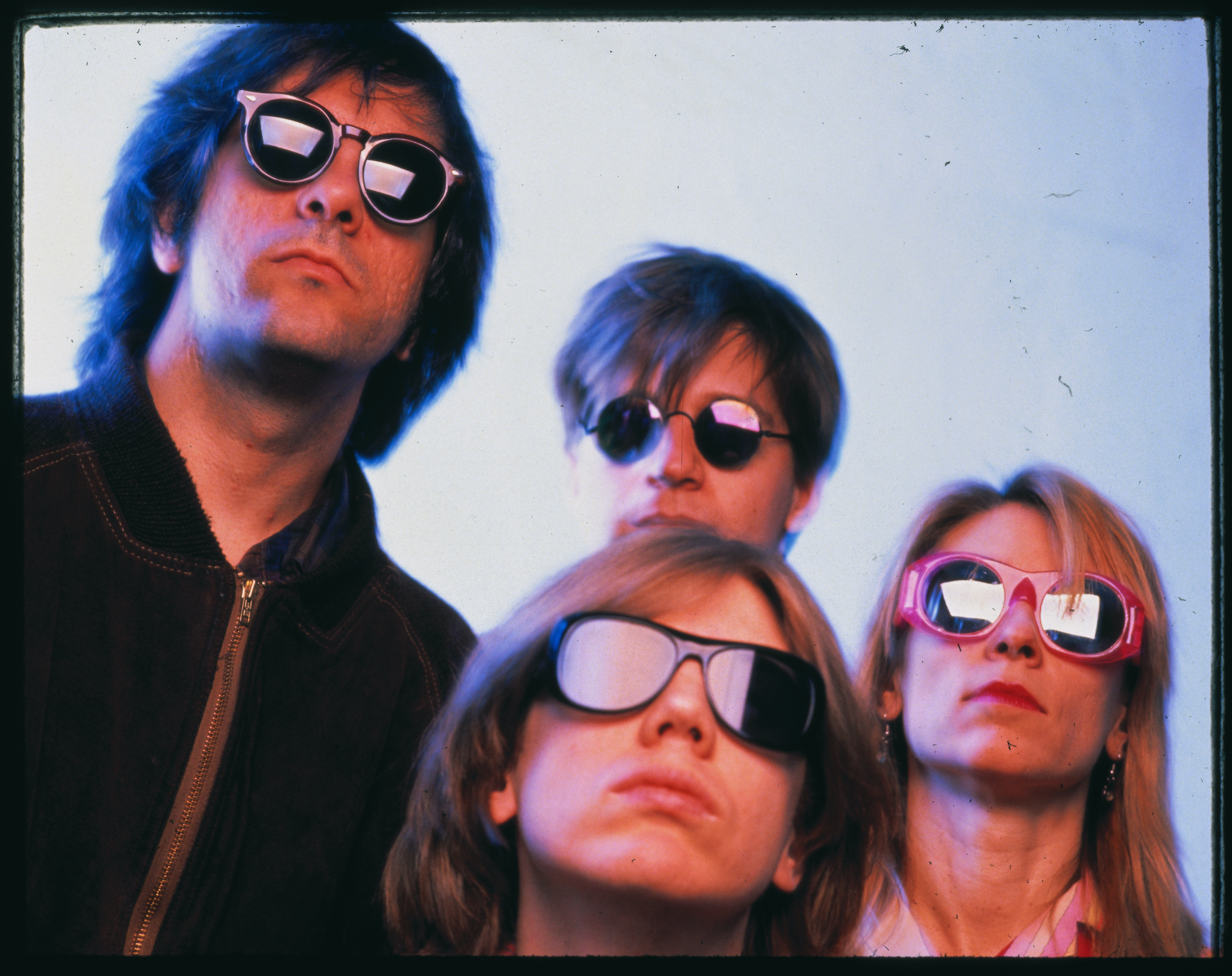 By 1990, Sonic Youth no longer belonged to the cool kids. Before Goo was released that June, they were a band you had to read about in music magazines, as none of the record shops in our area carried the SST catalog. Now signed to the newly established Geffen subsidiary DGC, they were no longer confined to the arty New York scene. Finding the beautiful sadness of Karen Carpenter’s story and inner peace in a whirlwind of guitar feedback, these nine tracks hit their uninitiated new fanbase with the force of a pipe bomb.

Sonic Youth’s sixth proper full-length remains arguably their most culturally (rather than critically) beloved album — whose iconic Raymond Pettibon cover may be surpassing Sgt. Pepper’s as the most parodied ever. As the Black Lives Matter movement fights for justice, it’s equally remarkable and revolting how relevant Goo’s subtext remains: outsiders, particularly women and people of color, uniting against “male, white corporate oppression.” It was an interview that concerned just that, between Kim Gordon and LL Cool J, in this publication back in 1989, that inspired Goo’s signature hit “Kool Thing,” which featured Public Enemy’s Chuck D.

For the first time since the band hung it up in 2011, SPIN spoke to all four members of Sonic Youth, as well as Pettibon himself, about how one of the koolest albums ever made was conceived, unforgettably packaged, and taken out on the road with Neil Young, who became consequently noisier himself as a result.

Steve Shelley: We met with a lot of labels after Daydream Nation; we were having a problem with the labels that we’d been on keeping up with us. It was hard to get paid for the records that you sold. Geffen was still small compared to the other majors. It was still technically an independent label run by David Geffen. That soon changed after we signed with them, the mergers with MCA and other labels, which was a little bit of a letdown. We met more people than just our A&R guy, Gary Gersh. But a big factor to us signing was this guy Mark Kates, who was in charge of college radio at the time. Mark was more familiar with Sonic Youth and our world than maybe even Gary was, and we related to Mark and we are still friends with him today. We all liked the buzz that they had with this rock band Guns N’ Roses at the time, and they seemed to be doing well.

Lee Ranaldo: It was the first record for the major label and we wanted it to be really good. We were getting five or 10 times the amount of money to make a record than we’ve ever spent before. How good can we make a record sound compared to Aerosmith, who spends that much money on every record? We did tons and tons of overdubs. And I remember thinking at one point ,if we had just taken the basic tracks we did as a group and added the vocals that we would have this record that would be even more powerful than what we ended up with. Maybe that’s a dream for someday to try a remix like that.

Shelley: To a degree, it felt like they were putting us in the college rock ghetto. But it turned out to be a good thing, because before you knew it there was Teenage Fanclub and Nirvana and Beck. So we had a little family on DGC.

Thurston Moore: I think we validated the DGC Geffen label for a lot of bands, certainly for Beck and Nirvana. If we weren’t on it, it would have been a different scene. The only reason we worked with Geffen was because of the fact that Mark Kates was working there and he came out of college radio. It was all about following the people who supported you. Nobody else would play our records, but they did. And a lot of them got work at major labels doing their radio divisions. Mark was a classic example of somebody coming out of college radio, who always heralded bands like us, all of a sudden he’s working at a major label and he wants bands that he likes to be represented on the label. And that’s the only reason we would sign to a label like that. If the A&R guy from Guns & Roses came to see us, we probably wouldn’t have been signed. Moore: God only knows what Goo would have sounded like if we did it in Wharton Tiers’ basement. That’s where we did Confusion Is Sex and Kill Yr Idols; maybe Goo would have come out the same way. All I know is that we did some demos for Goo that were more like eight-track demos, and there’s aspects of those that I find more interesting than what happens coming out of a 24-track board. I really liked the energy on those demos, because it sounded like the 24-track kind of spread things out a bit and it’s slightly more dissipating. It’s a learning process, the technology of it all. We were never a studio band in the sense of Pink Floyd or Steely Dan, where they were really utilizing every inch of it. We came to do that when we had our own studio, Echo Canyon, later on in the ’90s.

Kim Gordon: We were excited. That was our first getting-out-of-the-basement-type recording situation. I mean, we did record at Sear Sound. But Sear Sound at the time was pretty lo-fi. But in a great way.

Ranaldo: It was our first major-label record; we were second-guessing ourselves, like, is this mix good enough? This is pretty easy to do in the studio. And I’ve seen this happen to other bands from our scene that graduated to a major and got freaked out a little bit about making their first record. We weren’t sure the mixes with Nick Sansano were what we wanted, so we stopped working with him after a couple of sessions. We were desperate to try and finish this record, so the label brought in Ron St. Germain and we kind of referred to him as a console cowboy. He was a pilot at one point, I think, so he was really into all the tech stuff. And he did a really good job mixing it, though it was probably not mixed exactly the way we would have on our own.

Moore: I remember the engineer telling us that we would be using the B-room, because Public Enemy were going to be doing their new sessions in the other room. When we found that out, we were like, ‘Where do we sign?’ This was the perfect situation because I was so huge into It Takes a Nation of Millions to Hold Us Back. When we started recording there, I had everybody involved with that record in the studio at the time, so I have the CD that has like 40 signatures on it with the entire crew of PE somewhere. Ice Cube had come by for one day and was hanging out right when N.W.A was hitting and he had to be in New York. I remember Chuck D calling him ‘Cubism’ and things like that.

Shelley: We were recording at Greene Street Studios at the same time as Public Enemy, and Kim invited Chuck to say something on the middle eight of “Kool Thing.” But we would also spend time with Eric ‘Vietnam’ Sadler from the Bomb Squad, and he was really interested in what we were doing. Sometimes Flavor Flav would come by and sit with us for a bit and talk. But Eric seemed to be the most curious about what this band was doing with all these noisy guitars and everything.

Moore: Vietnam would always pop in and see what we were up to. He was the one who asked Chuck about being on “Kool Thing,” and within minutes, Chuck just rambled in. We asked him if he wanted to hear the song first, but he was like, ‘Nah, that’s alright, I’ll just put on the headphones and just run it.’ It was super, man, he did it in just one take. He listened, heard Kim’s recitation in the middle and he just flowed with it freestyle and then boom, that was it.

Gordon: Hip-hop was a really big part of downtown music in a way. It was a place where so many things would collide, whether it was like the tradition of jazz in New York City, and then hip-hop coming from uptown to downtown and then all the new classical music from like La Monte Young and Rhys Chatham. It was all kind of melding together. It felt like walking down a street in New York, just this constant bombardment of sounds.