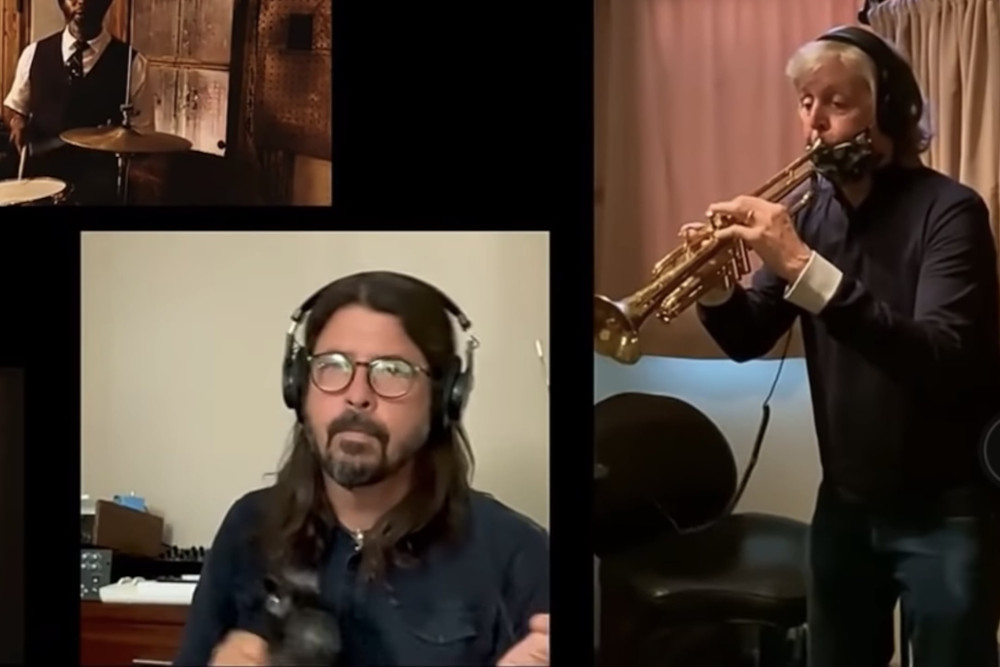 Dave Grohl and Paul McCartney teamed up as part of a sorta-Nirvana reunion in 2012, recording the rowdy hard-rock track “Cut Me Some Slack.” Now the duo have joined forces once more, and the results are a bit more…low-key.

The Foo Fighter and former Beatle participated in a ramshackle version of “When the Saints Go Marching In” as part of the ‘Round Midnight Preserves virtual livestream benefit, hosted Saturday by New Orleans’ Preservation Hall Jazz Band. The instrumentation was a bit unexpected: Grohl handled tambourine, and McCartney played trumpet.

The song also featured contributions from Elvis Costello, My Morning Jacket’s Jim James, Dave Matthews, Irma Thomas and Nathaniel Ratleliff, among others. A video of that performance is available below.

The livestream, which raised money for the Preservation Hall Foundation, weaved in previously recorded live footage featuring the Jazz Band, including songs from Beck, My Morning Jacket, Arcade Fire, Alabama Shakes and the late Sharon Jones.

The stream also offered fresh interviews and performances. Grohl contributed both: He duetted with the Jazz Band’s Charlie Gabriel on their “Come With Me” and talked about recording the Foo Fighters song “In the Clear” at Preservation Hall (and with the Jazz Band) as part of their 2014 LP, Sonic Highways.

“I really was concerned. I did not want to just come in and dump the Foo Fighters on you,” Grohl told Jazz Band member (and the venue’s creative director) Ben Jaffe. “It was important to me that we respectfully found our place in that hall and did our thing. It was around long before we ever got there; it will be around long after … It was exciting in that experiment.”