Every decade takes a couple of years to feel like itself, but the 1990s, in particular, had a soft launch. While 1991 would bring a bumper crop of era-defining albums from the likes of Nirvana, Pearl Jam, U2, and Red Hot Chili Peppers that would set the tone for alternative rock for the rest of the decade, the music of 1990 often feels like an outgrowth of the previous decades. Even the year’s biggest rock debut that was positioned as a contrast from hair metal was the decidedly retro Black Crowes.

Billboard’s Modern Rock chart, which had just been launched in late 1988, was still dominated by established British bands like The Psychedelic Furs and Gene Loves Jezebel. Depeche Mode and Sinead O’Connor became the year’s unlikely crossover stars. Observe the chart in the last week of April 1990, when the top 10 featured artists from England, Ireland, and Australia – and not a single American act.

Still, 1990 was an auspicious year for alternative rock, as the American underground crept closer to the mainstream. Jane’s Addiction released their biggest album, Ritual de lo Habitual, which they’d support the following summer by permanently altering the concert industry with the first Lollapalooza tour. Sonic Youth, They Might Be Giants, and Social Distortion released their major label debuts, while Fugazi and the Pixies released watershed indie albums. Here’s a look at 30 other albums turning 30 this year that might not get lavish anniversary media coverage, but still deserve a moment of remembrance, with a Spotify playlist of tracks from most of the albums.

Adrian Belew – Young Lions
King Crimson guitarist Adrian Belew released his most successful solo album while he was playing arenas around the world as the musical director for David Bowie’s Sound+Vision Tour in 1990. And that album, Young Lions, featured a duet with Bowie, “Pretty Pink Rose,” that reached no. 2 on Billboard’s Modern Rock chart. Five years later, I heard this album in middle school when one of my middle school friends bought it for reasons I still don’t understand. 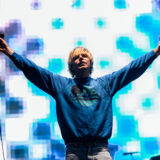 The Charlatans UK – Some Friendly
The Charlatans debuted in 1990 and remained on of Britain’s biggest alternative groups for the rest of the decade, bridging the baggy and Britpop eras. In America, though, they had to release music as Charlatans U.K. since a San Francisco group had the same name, and never quite sustained their initial success with Some Friendly and singles like “The Only One I Know.”

The Chills – Submarine Bells
Slash Records, an L.A.-based indie label distributed by Warner Bros., was an instrumental pipeline in bringing alternative rock to the mainstream throughout the ‘80s with bands like X and Violent Femmes. In 1990, Slash brought the Chills, already one of the biggest bands in their native New Zealand, over to the other side of the world, with the aptly titled “Heavenly Pop Hit” being their U.S. rock radio breakthrough.

The Cowboy Junkies – The Caution Horses
The Cowboy Junkies rose to fame in the late ‘80s with two albums that were both recorded live with the Toronto band huddled around a single microphone. After one unsuccessful attempt to record their third album with the same all-I-need-is-one-mic philosophy, they made The Caution Horses in a proper studio with multiple microphones. The more conventional sound turned off some purists, but Margo Timmins’ voice continued to cast a spell over listeners.

Dead Milkmen – Metaphysical Graffiti
The Dead Milkmen were the clown princes of ‘80s college radio, with hilarious cult classics like “Bitchin’ Camaro” and “Punk Rock Girl.” Their fifth album, with a title and cover that spoofed Led Zeppelin’s Physical Graffiti, didn’t continue the group’s string of breakout novelty singles. But it’s still a deliriously entertaining album, with songs like the surrealist Dick Van Dyke Show ode “I Tripped Over the Ottoman.”

Devo – Smooth Noodle Maps
Devo’s steady commercial decline over the course of the 1980s finally hit rock bottom at the beginning of the ‘90s with Smooth Noodle Maps. The satirical undertones of the band’s lyrics were still ever-present on songs like “Post-Post Modern Man,” but the avant-garde leanings of their early work had been almost completely sanded off. After touring the album, Devo went on a hiatus – they wouldn’t perform together for five years, and wouldn’t release another studio album until 2010. Even today, Smooth Noodle Maps remains the hardest Devo album to find.

John Doe – Meet John Doe
On the heels of his unlikely Hollywood breakout success in the 1989 films Great Balls of Fire! and Road House, X singer/songwriter John Doe signed to Geffen Records and released his first solo album. And his voice sounded perhaps better than expected without X’s Exene Cervenka harmonizing, with the album spinning off the minor radio hit “Let’s Be Mad.”

Duran Duran – Liberty
Duran Duran’s sixth album was the former MTV heartthrobs’ least successful album to date. But they’d be back on the charts soon enough: the Liberty deep cut “First Impressions” became the inspiration for “Come Undone,” a major hit for the band in 1993.

Happy Mondays – Pills ‘n’ Thrills and Bellyaches
Manchester’s Happy Mondays were already established stars of the Factory Records stable when acid house took over the U.K. in the late ‘80s, and remixes of songs from 1988’s Bummed became rave staples. So they hired one of their remixers, Paul Oakenfold, to produce their next album and it became, alongside the Stone Roses’ 1989 debut, one of the defining albums of the Madchester scene. Their dance-rock sound made a significantly smaller commercial impact in the U.S., but “Kinky Afro” topped the Modern Rock chart in early 1991.