These Days With Dirty Honey, A Quarantine Playlist

With everyone sequestered and self-quarantining due to the coronavirus, we’ve asked our favorite artists to come up with playlists that keep you entertained. Here is Los Angeles-based rock band Dirty Honey:

John Notto (guitar)
Led Zeppelin – “How Many More Times”
This song has the best riff, riff tones, drumming, drum tones, and a powerful Etta James-like vocal performance. Plus, it’s a long-form song that plays by its own rules and delivers the punch at the end.

Jackson Browne – “These Days”
I just love Jackson Browne. Love the storytelling, the tone of his voice, and the sound of the recordings. His music creates an instant feeling of nostalgia like you miss something while being grateful you at least had it for a time.

The Rolling Stones – “Can’t You Hear Me Knocking”
From the iconic guitar intro, the sex-driven backbeat, to the first line sung by Jagger, there isn’t a cooler, more swag-filled first 45-seconds of rock n roll song (maybe in history). And they do it all with a cool stride that doesn’t worry if you like it or not. But you do. 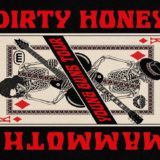 The Eagles – “Those Shoes”
The groove intro is immediately alluring on this one. It’s dark, sexy, calculated. The chord progression is just a loop, almost like a blues, but the Eagles put a twist on it that makes it theirs. Don Henley’s smoky blues vocals, mixed with the talk box harmonies, make this an overall sound that is them and them only.

Albert King – “Overall Junction”
It’s been a long time since blues of any kind has had a pocket like this. In just over two minutes, Albert lets you know how to say it right in the blues without over saying it. Come in, kill, get out. Thank you and goodnight.

Marc Labelle (lead singer)
Aerosmith – “No More No More”
Pretty much cause this is how I feel about quarantine.

AC/DC – “If You Want Blood (You Got It)”
This tune makes me forget about quarantine for a minute and really helps to get me up off my ass during this whole situation and out of the house enough to get some exercise. Plus it’s a balls-out rocker and classic that I’ve loved for a long time.

Audioslave – “Original Fire”
This is a tune that eluded me for quite some time though was still familiar somehow. I’ve been spending some of the late nights watching concerts of artists I love on YouTube and came across Chris Cornell performing this tune acoustically and jumped on Spotify to hear the full band version and loved it.

Neil Young – “Harvest Moon”
Been spending a lot of time cooking obviously and this is just a great chill song to throw on when you’re trying to forget about things for a bit.

Billie Eilish – “i love you”
Billie’s voice is unbelievably beautiful. I started listening to her record on tour on late-night bus rides. Great record to listen to on headphones. The production is amazing.

Herbie Hancock – “Actual Proof”
I’ve been using this quarantine time to shred a lot and this tune is a great tune to practice funk fusion. Paul Jackson and Mike Clark are sooooo funky!

The Rolling Stones – “Sweet Virginia”
I just love The Rolling Stones. This is one of my favorite tunes from Exile on Main Street and gives me the feeling of a bunch of friends making music together in a small bar or venue which I so desperately long for right now.

Corey Coverstone (drums)
The Who – “Baba O’Riley”
We had the amazing opportunity to open for the Who last year. They are absolute legends and listening to this song is so inspiring, and that’s something we all need at a time like this.

AC/DC – “Kicked in the Teeth”
It’s just a badass rocker that might help channel some frustrations with everything going on in the world right now.

Rush – “2112”
Another song that has always been inspiring ever since I was a kid, especially for me as the drummer. Neil’s passing was tough, and I’m hoping to channel some of his spirit on the next album.

Herbie Hancock – “Actual Proof”
John, Justin and I have been challenging ourselves by learning tunes like this and actually being able to shred on them. Trying to keep inspiring and fun vibes flowing.