Seattle’s best are about to come together for something massive. And no, we’re not talking about the ’95-96 SuperSonics.

Pearl Jam, Dave Matthews, Brandi Carlile and Macklemore are some of the biggest names behind All In WA’s newly announced virtual COVID-19 relief concert. It airs on June 10.

The show — also featuring Ciara and Seattle Seahawks quarterback Russell Wilson, Seahawks head coach Pete Carroll, Allen Stone, Death Cab for Cutie‘s Ben Gibbard and others — will be streamed on Twitch via Amazon Music’s channel, as well as on local Seattle television stations KING 5 and KONG at 7 pm PST. The concert will be available globally around 8 pm PT on Amazon Prime.

The money raised through the broadcast will be put toward several local organizations working on youth homelessness, food security and other issues. All In WA has already raised $20 million of its $65 million goal and Amazon CEO Jeff Bezos says he will match individual donations under $1 million, with a cap at $25 million in total. 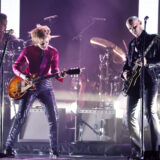 For more information on the mega performance, visit All In WA’s website.