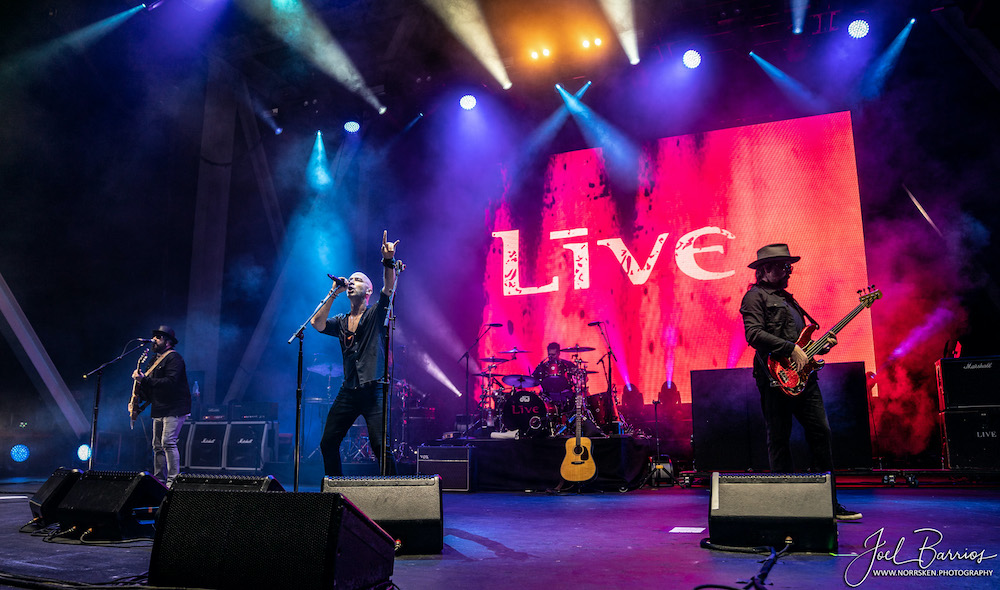 Since reuniting in 2016, Live hasn’t stopped touring. They had to be stopped. And from a logistical standpoint, quarantine couldn’t have happened at a better time for the group.

While Live never quite had the iconic power of tourmates like Counting Crows and Bush, the passion of their performances (and inescapable hits like “I Alone”) has helped them steal the show on numerous occasions. Those loyal to classic alternative radio are widely familiar with 1994’s Throwing Copper, the record that landed a number of singles and topped the charts in 1995, but the band’s catalog runs deeper with more mature songs — particularly on 1997’s abrasive Secret Samadhi and 1999’s more melodic The Distance to Here. In 2018, they didn’t overthink things and surprised everyone with the Local 717 EP.

“This year has been interesting, because we said, ‘OK, we did two big U.S. tours in a row, we need to, you know… we’ve only made an EP [since the reunion].’ So we thought ‘It’s time for a new album,'” Kowalczyk said. “This was the year that we decided not to take a summer tour, because we’ve been going so hard and wanted it to be a creative year to focus on writing.”

Inspired by the band’s reinvigorated first leg of the reunion tour, what came out was, as Kowalczyk calls it, “a really, really simple rock EP that fell out of the sky and was fun.”

And planning for a creative year has worked out, if unexpectedly. The band was supposed to tour internationally before the COVID-19 pandemic struck. But the downtime has allowed them to slow down and revisit what they’ve done since the reunion. On top of the new material, other plans include potentially filming a documentary.

Even though Throwing Copper comprises the bulk of the band’s setlist these days — which you can see in the footage below, captured from the band’s Atlantic City show last August — their biggest smash hasn’t defined who or what Live is. The clip offers a snapshot into how Live has rounded into their vintage form as their reunion tour has gone on. They’ve leaned into playing the classics and the fans dig it.

The unexpected reconciliation has spawned what Kowalczyk says has been a very fruitful period of writing. The band is ready to make the full transition from leaning on nostalgia to really seeing what’s left in the creative tank.

“There’s extra energy I know because I don’t think any of us expected to get back together. So we’re still up there sort of pinching ourselves in a way. You know, that we’re even up here again as a band,” he says.

It also helps that three of the four members — including Kowalczyk — still live within a few hours drive of the band’s Pennsylvania home base, now equipped with their own studio. Due to drummer Chad Gracey residing in California, they were able to zap files back and forth, recording the EP remotely. Live was ready to head back into the studio before quarantine to work on a new album, though a temporary wrench in a full-fledged comeback album wasn’t something totally foreign to them. And the band already has a bunch of new songs.

“The funny thing is, we started right away when we, you know, got back together,” Kowalczyk explains. “We have this amazing studio, so we started to record and write new music right away. So we have we have probably five or six things that are in various stages of completion from that from a while back from right after we got back together. And then the EP was kind of interesting because that was like sort of a different era.”

Those songs, Kowalczyk says, are the core of what’s to be a new album and hope to finish up and get it out next year: “Hopefully in the summer, we can get close enough to record. Now it’s just a matter of putting the finishing touches on it.”