Earlier this year, Sonic Youth‘s Lee Ranaldo released a collaborative new album with Raul Refree and also launched his own Bandcamp page where he shared a bunch of rarities.

Now, the guitarist has unveiled yet another buried gem from his catalog: 1998’s Amarillo Ramp (for Robert Smithson). In conjunction with that release, Ranaldo shared a video for a cover he did of John Lennon’s “Isolation,” which, like the others who have tackled the song in recent weeks, feels fitting.

Here’s what Ranaldo had to say about the song:

“During this time of enforced global confinement – the ‘planetary pause’, as I’ve been calling it, I’ve been sorting thru some old releases, and came across my version of John Lennon’s
‘Isolation’, which was recorded back in 1991 and released on the 1998 album Amarillo Ramp
(for Robert Smithson). Our dear, departed friend Epic Soundtracks (Swell Maps, These Immortal
Souls, Crime and the City Solution) played drums on the track, and I’ve always loved both the
original and the version of the song we made, almost 30 years ago now… I thought it could be
timely to re-present this track as relevant to our current moment. For video accompaniment I
sent a request to friends far and wide around the globe, asking for brief personal video clips of
the confinement from wherever they were – what they saw out on their streets, in their living
spaces; whatever subjective view on our current situation they wanted to send me. I cut them
all together to the song as a sort of informal, intimate record of this moment.” 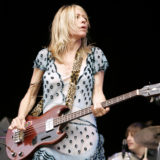 Additionally, Sonic Youth continue to plow ahead by releasing live shows from their archive on Bandcamp as well, which Ranaldo told us would happen in our interview with him in February.

Check out the cover below. You can grab the release on Bandcamp here.