Eddie Vedder is a devoted Chicago Bulls fan and Dennis Rodman listened to Pearl Jam while working out, so it was only a matter of time before the two became friends.

During a recent chat with Bill Simmons, Vedder detailed his “long, long, deep friendship” with the eccentric NBA star and told a crazy story where the two flew to Vegas and back just to see Jane’s Addiction.

The Bulls were in Seattle to play the Supersonics, and Vedder was hanging out at the Four Seasons with the team when Rodman’s security guard George took out three plane tickets. “Jane’s Addiction is playing in Vegas,” Rodman said. 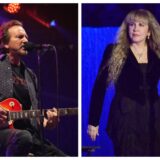 The Bulls coach Phil Jackson liked Vedder because he’s a friend that could calm Rodman down, but Rodman was persuasive and the next thing he knew they were at the Seattle airport.

“We’re running through the airport. People are creating a running trail behind him, like this river,” Vedder remembered.   They made it to Vegas and were sitting on the side of the stage when Jane’s Addiction came on. Rodman looked over at the Pearl Jam singer and said, “This is relaxing, right?”

“That’s how on rocket jet fuel he was, that that was relaxing,” Vedder said with a laugh.

They flew back that night, and Rodman was a rebounding machine against the Sonics the next day.

During that same conversation, Vedder and PJ bassist Jeff Ament talked about postponing their tour and reminisced about the band’s early years.