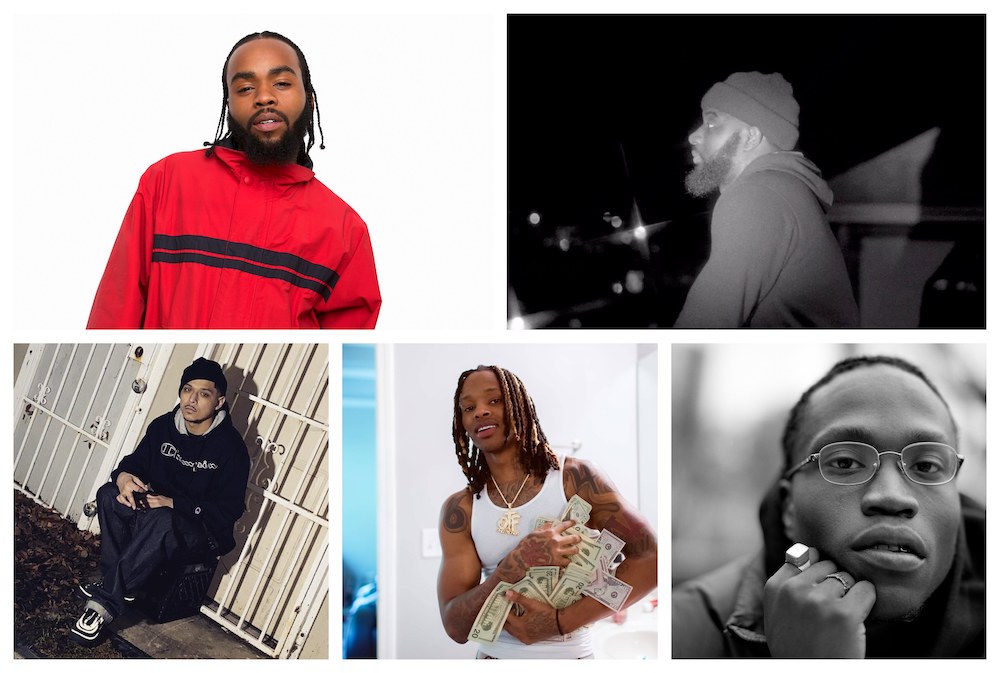 Stockton doesn’t have a history of nationally-recognized rappers, but local talent may have been forever diverted or cut down. As of 2019, the Northern California city had roughly 30 active gangs and a rising rate of gun-related homicides. The root causes are the same as they’ve always been in similarly afflicted cities: decades of poverty, cyclical violence, institutional neglect w/r/t education, childcare, and gang intervention, and a fractured criminal justice system. In recent years, though, Stockton rappers like Haiti Babii (you probably saw this freestyle somewhere), MBNel, and Lil1700adrian have gained traction in Stockton and online. With only a handful of songs to his name, Lil1700adrian’s cousin Acito has become one of the city’s fastest rising rappers in 2020.

Acito raps candidly and with a confidence that belies the short length of his career. A natural, he delivers naturalistic portraits of life on the blocks surrounding Oak Park. The plot points are hollow points, closed caskets, yellow tape, and life sentences. More often than not, the production hews closer to the sinister bounce and deep basslines of Bay Area Mobb music. Acito’s latest, “Clutchin & Mobbin”, is a harrowing slap. Over a beat that finds the middle ground between Mobb music and G-funk, Acito recounts nightmares that visit him behind closed lids and whenever he goes outside. He mourns deceased friends and gives you several reasons why he wears a vest. Sadly, he only had to say that he’s from Stockton.

Mutant Academy is one of the most prolific and consistent collectives in rap. Half the praise goes to their eight producers, a list that includes Ohbliv, Foisey, and Tuamie, all of whom have created several brilliant instrumental projects. The other half goes to the rappers to whom they supply beats: Fly Anakin, Henny L.O., and Big Kahuna OG. Of the latter camp, Anakin has garnered the most attention. His excellent 2020 album At the End of the Day opens with a debate about whether he deserved this 2018 mural in his hometown of Richmond, Virginia. (His portrait appears alongside the face of Ohbliv.) The year after that mural, Madlib called Anakin “one of the illest MCs” on Twitter.

Anakin doesn’t weigh in on the mural discussion or rest on the Madlib co-sign on At the End of the Day. Instead, he continues to deliver sharp rhymes with an inimitable voice. It’s nasal, high-pitched, and sometimes strained. But it’s also full of energy and passion, as though Anakin has to get every word out just to breathe again. No matter the beat, it cuts through. He sometimes sounds like a faster Westside Gunn with less bass. Anakin’s music feels more intimate, however, more approachable than the litany of designer fabrics that drape the automatic weapons in Gunn’s oeuvre. This is still linguistically dense, stab-your-brain-with-your-nose-bone rap, but it feels more personal, more concerned with reaching a community than the runway.

You can hear Anakin’s greatest strengths on the Foisey-produced “Chess Pieces.” He raps incredibly well about rapping well while also offering vivid glimpses of his past and present. In the first verse, you’re with him in Richmond: “I’m in this bullet-riddled city praying that they don’t shoot me down.” In the next, the beat gives him “flashback of times [he] was pitching.” For every line of mic supremacy, Anakin brings you into his world. Does he deserve a mural in Richmond? I can’t believe it was ever a question.

Mattapan has Jewish roots, but the Boston neighborhood has been a vibrant enclave of Haitian, African, and Caribbean immigrants for decades. Kadeem condenses Mattapan’s cultural history into a single culinary line on “big gains”, one of five tracks from his late April EP passing exchange: “My bread Jamaican, but the salmon Jewish.” Sadly, many also know the area for its high homicide rate, which earned it the epithet “Murderpan.”

With each release, you can hear how this culturally rich but perennially suffering community shaped Kadeem. The 26-year-old’s 2019 debut album, World Sport, is full of lyrics about him struggling in, thriving in, and pedaling his ‘87 Schwinn World Sport through Mattapan and Boston. Rats and snakes lurk every day, and Kadeem has had to resort to legally dubious means to make rent. Still, he displays his municipal pride, eulogizing Mattapan’s shuttered Caribbean Cultural Center on the same track that he shouts out nightclubs and roller rinks in adjacent areas (“Three Cs”).

passing exchange builds on the sound of World Sport, which was somber yet hopeful, and establishes Kadeem as one of the most promising rappers from Boston since Cousin Stizz. You can hear the influence of Prodigy and KA—New Yorker’s from respectively violent cities—in the cadences, the vivid figurative language surrounding felonious activities, and the severity of his resonant voice. But Kadeem never lapses into imitation. He created a visual project for passing exchange that is both an extended album-sampler and a tour of Boston as he knows it. If you click to 03:15, you can listen to “A Cross to Bear.” Kadeem delivers subtle Mortal Kombat allusions and grave lines about the gun violence in Mattapan (“…the revolver put six on the body like pallbearers”). Hearing him narrate, you hope that the homicide rate will decline, that everyone in his neighborhood will have less weight to carry and more to celebrate.

Rap arguably bests all genres in its narrative capacity and scope. The inherently higher word count explains this in part, but storytelling is also rap tradition. Slick Rick’s “Children’s Story”, Geto Boys’ “Mind Playin Tricks on Me”, Eminem’s “Stan” the album-length arcs of Kendrick Lamar’s catalog — the list of cinematic narratives (and allusions) is endless. Beginning with 2018’s “Crazy Story,” King Von has emerged as the author of some of the most gripping street narratives in Chicago drill and rap writ large. He might be the Walter Mosley of O Block.

Von’s recently released Levon James is a marked improvement from 2019’s Grandson, Vol. 1. He displays greater confidence and diversity in his delivery, his energetic and commanding voice rising above the speaker-atomizing bass of the production. These are stories from his native 64th St. — historically one of the most dangerous blocks in all of Chicago — written in blood and chalk outlines. Distinguishing fact from fiction is impossible, and that’s the point. “Took Her to the O” is the clear standout, the story of a casual date that ends in homicide. It succeeds because of its specificity (e.g., the missed calls on a phone log), the speed with which Von builds tension, the intensity of his delivery, and the way he bounces between words.

“3 A.M.” isn’t a B-side so much as it is a companion piece. It’s one of the latest Levon James songs to blow, with a video that mirrors beats of Von’s recorded script. Here, Von plays a father desperate to pay his bills and provide for his child. In that desperation, he robs a richer man from an adjacent block who, surprise, happens to be dating his sister. The twist reaffirms Von’s gift for storytelling, but the most affecting moment comes when the protagonist hopes that the robbery won’t result in the loss of another life. As captivating as “3 A.M.” is, it resonates because it illuminates the poverty responsible for much of the crime and violence in Von’s community. Until there are institutional changes to rectify systemic wrongs, he’ll continue to document the consequences one Chicago story at a time.

The competitive nature of rap continually focuses the lens on the individual rather than the collective. “[Artist name] is better, more innovative, more influential, etc. than [artist name].” The influence and import of artistic communities, groups of musicians with stylistic and ideological bonds that foster collaboration, is too often ignored. For past examples, see the Native Tongues, the Soulquarians, or the Dungeon Family. In the present, you can look at New York’s sLUms collective, which includes but is not limited to MIKE, Ade Hakim, and Medslaus.

Medhane is half of MedSlaus alongside Slauson Malone. Like several sLUms collective members, you can hear the influence of Earl Sweatshirt, with whom Medhane, MIKE, and more have collaborated. It’s there in the murky, lo-fi production as much as the sedate and solemn delivery. Every line is weighted by a stoned gravity. But Medhane’s direct and confessional music is his own. The Carnegie Mellon graduate’s newest album, Cold Water, is his best to date. He looks inward as much as he looks outward, rapping about moving past personal trauma (“Na Fr”) and the strength he’s drawn from his peers (“Driftin strong vision / Many bodies one mission” – “I’m Deadass”).

“Allegedly” was a prelude to Cold Water, which dropped in late April. Produced by Pro Era’s Chuck Strangers, it’s sonically brighter than much of Cold Water. Lush strings rise and fall over concussive boom-bap drums. Though it doesn’t appear on Cold Water, Medhane is in the same headspace, shuttling between introspection and insight about the world around him. He touches on the cyclical nature of gun violence and the pain it causes before moving to the pressure to succeed in the wake of achieving some semblance of mental health. If you haven’t already dived into Cold Water, “Allegedly” showcases the skills Medhane shares with his collaborators and those that remain his.