The Used Open Up About Heartwork and Debut “Big, Wanna Be”

The band's eighth album is out April 24 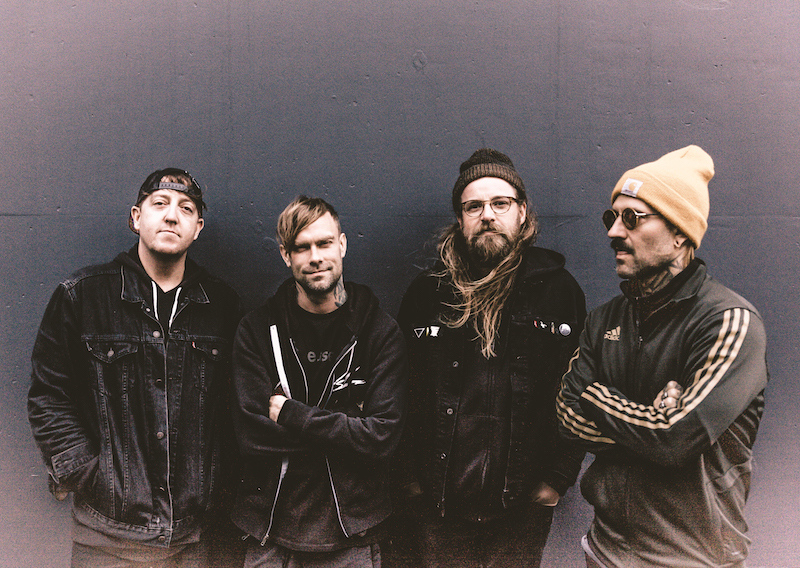 Nearly 18 years after The Used released their self-titled debut album, the emo posterboys-turned-veteran-rockers return with their eighth full-length offering, Heartwork (April 24, Big Noise). But while vocalist Bert McCracken and bassist Jeph Howard have consistently released one successful album after another since their days playing the basements and backyards of Utah, Heartwork actually has a lot more in common with their first few records than anything from their recent output.

The quartet — which also includes guitarist Joey Bradford’s first appearance on a studio release as well as longtime drummer Dan Whitesides — is back to working with iconic producer and Goldfinger frontman John Feldmann (who’s produced several of the band’s previous albums). But perhaps the bigger callback to The Used’s early days is the complete freedom and lack of drama surrounding the recording process.

“We wanted to get back in touch with the versions of ourselves who initially fell in love with music,” McCracken said. “We wanted to think about what was special about the first two records, and I think that was the freedom of John’s studio [in California] and the child-like approach to writing music with no other intentions than to write songs that you love. We all come from such different musical backgrounds and different places musically that I think this record is modern in that it’s quite genreless.”

The freedom to explore provided by Feldmann and The Used’s matured emotional stability allowed them to create one of the most extreme albums in the band’s history. With heavy tracks that would fit perfectly alongside “A Box Full of Sharp Objects” and one of the poppiest songs that McCracken has ever sung on, Heartwork displays the wide range the group can cover — all without abandoning the aspects that earned them a dedicated fanbase in the first place.

“I think the connection is to the core of what The Used has always been about, and that’s the songs that kind of speak to the soul,” McCracken said. “Music for us is this therapeutic philosophic journey. It’s not just something we put on in the background, so we really wanted to get in touch with that connection to the heart of things and feel connected to the music in the way that we did when we were kids — and what a ride. It was an amazing process.”

Of course, with the vast majority of the world in quarantine — and the general hellscape that 2020 has become for many people — it’s a bit of a strange time for anyone to be releasing an album. Having canceled tours, festivals and other appearances that would’ve supported Heartwork, McCracken and the band are understandably disappointed at the circumstances. They also realize that there are countless people out there who need this record now more than ever, just as The Used have musically been there for their fans’ most trying times over the last two decades.

“It’s a huge drag, just as it is for everyone in every circumstance,” McCracken said. “It could be a lot worse because a lot of people’s situations are so dire with losing jobs, businesses, and friends and family. I don’t think you could stop live music if you tried unless it was a full-blown zombie apocalypse and we understand right now that there are people who are in serious situations who need an escape now more than ever. It feels like the perfect time to release a record for them. It’s a drag that we can’t be playing these new songs live, but everything is just postponed instead of canceled. The cool tours and awesome shit we have lined up will just happen as soon as we can get back out there.”

Even though Heartwork was completed long before tours were canceled and countries began implementing lockdowns, tracks like “Big, Wanna Be” feel more appropriate now than ever before — with McCracken’s lyrics taking a critical look at social media stardom while also being full of political references and inside jokes from the band’s time in the studio.

“‘Big, Wanna Be’ I think is a really sardonic and sarcastic look at the world of ‘influencing’ in general,” McCracken said. “I think it really speaks to the soul of what humanity has lost with Instagram influencers. It’s been going on for a long time, but it’s been elevated with Instagram and social media. They’re platforms that make people feel jealous, but that feeling of jealousy can’t be reciprocated on the other side. You can’t feel someone feeling jealous, so it’s just this weird confusing conundrum that’s a horrible situation for humans to be stuck in. But it’s also kind of a light message about pushing yourself, as I just started working out with resistance training about a year ago, so in a roundabout joking kind of way it’s also about how I want to become way larger than I’m capable of becoming.”

Check out the exclusive premiere of “Big, Wanna Be” with visuals from Matthew Crumpton below.

Bamboozle: The Good, the Bad & the Soggy