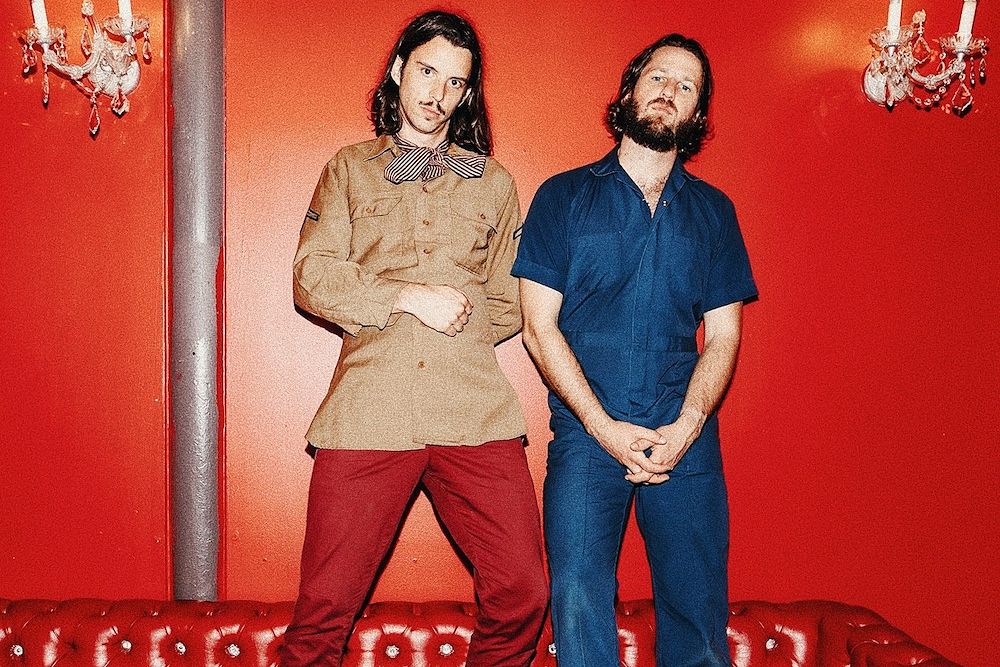 What do you get when you mix the nephew of original Black Crowes drummer Steve Gorman, an unassuming bicycle enthusiast, a mutual affinity for Neil Young, and a sacred bonding moment at the hands of the Flaming Lips? Illiterate Light. The promising Virginia-based duo has an ambition that is promising at a time when rock needs it. While their work is still in its early stages, Illiterate Light is trending strongly in a positive direction.

There’s been quite a bit of movement in the Illiterate Light camp over the last 12-months. The raucous duo consisting of Jeff Gorman (lead guitar and vocals, while manning bass riffs with a series of foot pedals) and Jake Cochran (“standing” drummer and vocals), signed their major-label deal with Atlantic in April 2019 and quickly hit the major festival circuit hard during the ensuing summer months. That October, their eponymous debut was released into the wild.

Since their 2015 inception, Illiterate Light has been actively looking to find the sound that would best define their path forward, eventually finding it by simply boiling down past: structured studio experiences, and getting right to the core of their live setup – two guys, in the moment, playing their respective rigs; no substitutions.

“We had a couple of home-recorded EPs, and we liked the studio, but it was something we knew – and wanted – to get better at,” Cochran said. “We’d play all these shows to a bunch of college kids who would be jumping around like crazy and then see us after the show to buy a CD and they’d get back in touch with us and be like, ‘Hey, like, I don’t think I got the right CD, this doesn’t even sound like you guys…’”

Seeking the expertise of an outside source (or two) to propel them in the direction they were looking to go, they enlisted the help of Adrian Olsen (Jack White, Kings of Leon) of Montrose Recording in Richmond and Vance Powell (Foxygen, Natalie Prass) at Sputnik Sound in Nashville. With their guidance, 2019’s Sweet Beast was born.

Five gloriously frenzied indie folk-rock tunes bookended by the album’s opener “Better Than I Used To” and cathartic concluding slow burner, “Growin’ Down” – two tunes that started to catch the ears of radio, and new fans around the country – with a sound reminiscent of My Morning Jacket, Neil Young, and Band of Horses, permeating from a much more condensed package.

The response to the band’s debut has been encouraging. Coming off a string of touring in support of the release and is starting to sell out small clubs around the country. Those efforts have led to the release of In the Moment: Illiterate Light Live – an ongoing live record and video series (on the band’s Spotify and YouTube Channel). They started with Neil Young’s “Vampire Blues,” moved their way into, “Nuthin’s Fair,” and on April 2, released the third installment, “In the Ground.” These three songs were shot and recorded at The Golden Pony in Harrisonburg, Virginia.

They’re releasing the songs at a frequency of one song a month from now until forever with the idea of tracking the progress and growth of the band as they work their way from small clubs to larger venues, theatres, and, eventually, with any luck, amphitheaters.

“My brain is so kind of wrapped up on this new project,” Gorman said speaking about In the Moment… “I just get to sit back and actually listen, like I did last night, trying to figure out what the next song is going to be and from what performance. (This experience) also gives me a chance to just sit there and actually watch the shows as an observer. It gives me the opportunity to really see what the shows are like, really seeing peoples’ faces, and really watching the chemistry between Jake and I. Of course, there’s always some areas that you want to improve and make better, but at the same time, it’s just really cool to see a fanbase growing and to sell out shows, and see 200-300 people, you know, singing along to a song that you wrote in your bedroom… I’m excited to see where this goes.”