Tim Burgess has launched a Twitter chat/album listening series with a host of bands that’s been making those stay-at-home orders during coronavirus times, a little easier.

Burgess – frontman for Britain’s The Charlatans, solo artist, DJ and author – has recruited various artists to live-tweet each night at 10 pm GMT, while folks at home press play/stream/drop the needle on a selected record at the same time. He recently live-tweeted as fans listened at home to The Charlatans’ Some Friendly LP, sharing memories from that time period. On Friday night, Paul “Bonehead” Arthurs, tweeted as people across the globe played Oasis’ debut album Definitely Maybe. Burgess shared his memories of the band, too, and photographer Kevin Cummins and Microdot (which designed Oasis’ sleeves) also took part. Liam Gallagher was supposed to chime in but missed the opportunity. Arthurs tweeted, “Panicking here where are you @liamgallagher ?????” as he tried to keep up with the flood of messages from Oasis fans around the globe.

So far, the listening sessions Burgess has lined up members of Blur (Dave Rowntree) and Franz Ferdinand (Alex Kapranos). Burgess told SPIN about how the #timstwitterlisteningparty series came about, shared some upcoming guests to come, and dished on his new solo album — I Love the New Sky — when we caught up with him on Friday.

SPIN: First of all, I love this [Twitter party] that you’re doing. It’s been really fun as [bands] share old memories – yours, Dave [Rowntree’s, Blur]. How did you come up with it? It’s not the obvious idea.
Tim Burgess: I’ve really enjoyed it and I have done listening parties before where I’ve gone through Charlatans records and just celebrated an anniversary or something like that. But the idea of doing it with other people from other bands kind of occurred to me during this time of isolation. I put it out there first to Alex [Kapranos] from Franz Ferdinand, who got involved when I did [a] Some Friendly listening party because he was a fan and bought it when he was 17 and he seemed like the obvious choice to do the next one. And then obviously Dave, I’ve known for a long time and he really pulled out all the stops and did an amazing one and then Ride [on Thursday] night. 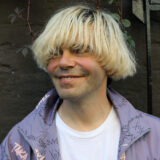 Tim Burgess’ New Solo Album Is Anything But Typical Music

Dave posted some seriously old Blur photos that I have never seen before.
I know! He put so much effort into it. It was amazing. It was so fantastic.

MAGIC AMERICA
We Spent a lot of time touring America and grew to love it after a few false starts.
The song is more about Walt Disney’s fake America than the real thing. Here are some pics from a US tour around that time. #timstwitterlisteningparty pic.twitter.com/LN4ObI0OO3

And The Cribs are coming up? You have all three Jarman [brothers – Ryan, Ross and Gary]?
Yeah, we’ve got all three Jarmans. We’re doing Suede one … Flaming Lips, Orange Juice. So yeah, it’s just going to keep going. I said we’re going to go as long as the pandemic kind of goes on for. I mean, why not?

How is it working out with you coordinating this? Are you doing it yourself? Are you sending people text messages?
I’ve been doing it mostly through direct messages on Twitter. And then [on Friday], I managed to speak to my old record label – 4AD – and they’ve reduced the price of [The Charlatans’ record] Telling Stories, which I’m doing Saturday. Brix Smith, from The Fall, is doing [The] Wonderful [and Frightening World of The Fall] … and Simon Raymonde [of Cocteau Twins] is doing Heaven or Las Vegas. Because we’re all on the same label, they’re reducing the record by half. So, it’s kind of like helping them as well, in a way. But [the label] got in touch with me because they enjoyed what I was doing.

Have [artists] been reaching out to you now since they’ve seen that you’ve been [setting up these listening parties]? It seems really easy for them to do. They just have to tweet for an hour or so.
Exactly. As long as the record lasts. So many people are saying how much they’re enjoying listening to an album in its entirety and they never get a chance to do that. Because people have got so much time on their hands, they’re just staying in, cracking open a drink or getting snacks or whatever and just listening to an album. They’re rediscovering music in an album format, which I’m a big fan of. So, it’s very exciting.

Are you participating when other artists are tweeting? You’re [breaking] out the popcorn or whatever snack …
I’m doing it at the same time as they are. It’s cosmic support.

But what about snacks? What’s on your snack plate?
I’m a big fan of grapes when I’m tweeting (laughs).

us and some mates and @MicrodotCreativ setting up the album cover at my house from my unseen film pic.twitter.com/kJFLo1xobx

I know you did your [upcoming] album, [I Love the New Sky] in a quiet little place. You’ve maybe had a little practice quarantining because you were really far away from everything?
Yeah, it’s in a place called Norfolk, [England]. So, it’s kind of in the middle of the woods, but it’s close to the sea. … I do spend a lot of time in isolation and I have done now for three albums I think I’ve made here now. And, yeah, I’m kind of used to it in a way.

Have you been checking out any of the artists doing live streams? Have you had time?
I haven’t.

It’s a full-time job organizing the Twitter stuff, to be honest.
It really is. I kind of put together a few ideas in the afternoon for the evening and also, I have a 6-year-old and he’s off school — so he needs full-time attention — so doing that as well. I am all for everybody doing as much as they can because at the end of the day, people want to do stuff and if it helps other people then brilliant.

You wrote everything on [I Love the New Sky]. What was the first song that came to fruition? “Sweetheart Mercury” is so cute.
“Sweetheart Mercury” was quite early on, I think, as was, “Undertow.” So, a very kind of slow brooding one and [a] mercurial, kind of free and easy one. The whole record, I think it kind of dates back to – it was a year without a doubt and probably some of the writing a little bit before that. It was just a really great record to write and I knew that I wanted to take time on it, and I didn’t want it to be a collaborative record. Although [it] would not have sounded the same if [the other musicians] hadn’t played on it. But I wanted the writing to be completely solo and … let the melody inform the chords, and the chords just try and be interesting and take on expectations and have layers and just all the great things that you think about. I wanted to write a classic record.