Journey’s principal members, guitarist and founding member Neal Schon and keyboardist Jon Cain, have fired drummer Steven Smith and bassist Ross Valory after alleging an attempted “coup” by the rhythm section duo which led to a lawsuit being filed in California on Tuesday (March 3).

In the lawsuit, Schon and Cain claim the fired pair concocted a “scheme” that was “not only malicious but also very ill-conceived” in order to “hold the Journey name hostage” and “provide them with wind-fall payments for their retirement.”

From the complaint: “Smith and Valory are acting solely out of their personal greed, disregarding the future of Journey and destroying the chemistry, cohesion and rapport necessary for the band to play together.” 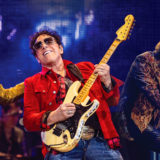 Journey Return With Their First Album in 11 Years

According to the lawsuit, Smith and Valory announced their retirement plans and proceeded to orchestrate a takeover of one of Journey’s corporate entities, Nightmare Productions, in order to receive a share of Journey’s touring revenue in perpetuity “while they perform absolutely no work for the band.”

The complaint also stated that “Smith and Valory’s coup drove a dagger between band members. Smith and Valory have placed their own greed before the interests of the band, sowing discontent and discord, jeopardizing the future of Journey.” Smith and Vallory were given written notice on March 3, 2020, that they are no longer part of the band.

Schon and Cain are seeking in excess of $10 million in damages “and a declaratory judgment that Elmo Partners holds an exclusive, irrevocable license to the Journey Mark and that Cain and Schon solely and exclusively control the use of the Journey Mark and are expressly authorized to perform together as Journey, with or without anyone else.”

In a press release, Schon and Cain stated that Journey, which is fronted by longtime vocalist Arnel Pineda, will continue with a new rhythm section for their 60-plus city tour of North America that begins in May.

Journey was formed in San Francisco in 1973. Steve Perry was in Journey until 1987, left for a solo career, and came back again in the mid-nineties and left again in 1998. Schon is the only original member of Journey.