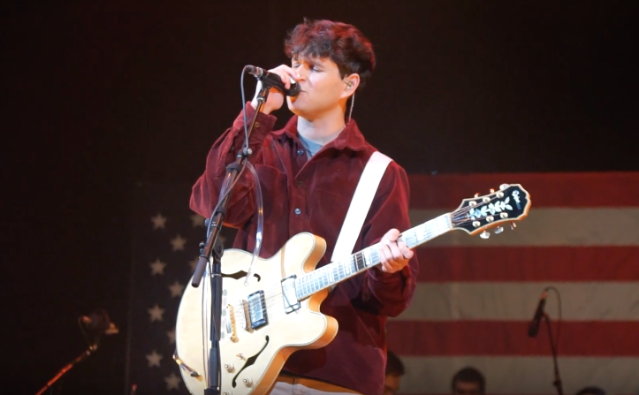 Last week, Vampire Weekend and Bon Iver announced that they’d each be performing a concert at this year’s Iowa caucus in support of Bernie Sanders, and following Justin Vernon’s solo acoustic set Friday night, the former band brought their brand of summertime bliss to Cedar Rapids, Iowa for an eclectic, career-spanning set.

The group kicked off the night with their Father of the Bride standout “Harmony Hall,” followed by early favorites like “Cape Cod Kwassa Kwassa” and “Holiday” from their first two albums. From there, Ezra Koenig led the band back to more recent material, playing songs like “This Life,” “Sunflower,” and “Married in a Gold Rush.” If that weren’t enough, they also threw in a cover of Thin Lizzy’s 1976 hit “The Boys Are Back in Town,” which they’ve been known to play live in the past, before bringing things home with their breakthrough single “A-Punk.”

Vampire Weekend’s latest studio album Father of the Bride was released in May 2019 featuring the singles “2021,” “Sunflower,” “Big Blue,” “This Life,” “Unbearably White,” and “Harmony Hall,” which later appeared on our list of the 10 Best Songs of 2019. Watch video footage of the band’s performance in Cedar Rapids below.