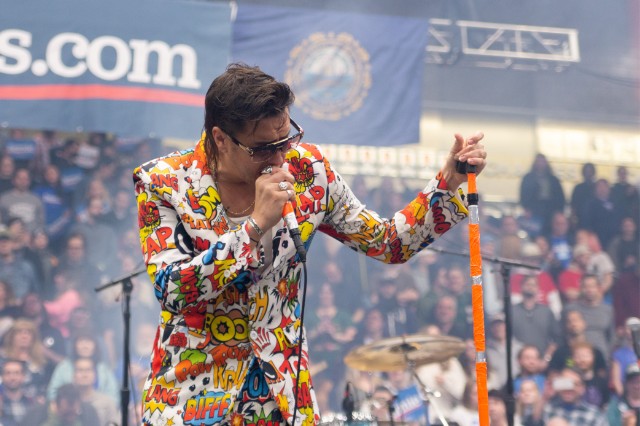 The standard age range of the current student body at the University of New Hampshire in Durham, New Hampshire was between 0 and 5 when The Strokes dropped their first two records on planet earth. I was in my second year at UNH when the band’s sophomore effort, Room On Fire, was released. The Strokes were on top of the music world back then – setting many rooms on fire in their wake as they traversed the uncertain cultural grounds of the early aughts. It turns out, of all the rooms they set ablaze, none existed in New Hampshire, which is where they found themselves seemingly feeling the Bern on the eve of the nation’s first presidential primary at a rally for Democratic presidential hopeful Bernie Sanders.

“It gives me great pleasure, to introduce, for the first time in New Hampshire… The Strokes!,” Sanders proclaimed after dropping his own fiery speech at the Whittemore Center.

Led by Casablancas in his colorfully loud suit adorned in comic-book action proclamations, the band launched into an apt cover of the Talking Heads’ “Burning Down the House.”

The band ripped through a set of 12 tunes, covering a lot of ground in a short span of time – playing a some hits, a few deeper cuts, and a new tune (“Bad Decisions”) from their upcoming album which Casablancas announced would be released on April 10 (following a viewing of their new music video on the arena’s jumbotron).

The totality of the set was cut short by Casablancas’s mounting frustration that the venue’s perimeter lighting was powered on halfway through the show.

“I need my sunglasses,” the singer groveled a couple of times. “It got so bright in here… Safety first, I guess.”

Instead of ending with a string of tunes that included, “Juicebox,” “Head in a Cage,” “Automatic Stop,” and “Last Nite” (as seen on the setlist), The Strokes culminated with a rousing version of “New York City Cops,” welcoming the crowd onto the stage which also saw law enforcement activity take a hold as well. When the stage cleared of the band and the crowd dispersed, all that was left was a line of police officers and a whole lot of campaign debris on the floor.

You can catch the entire evening’s festivities here (which include an opening set from Sunflower Bean and speeches from Rep. Alexandria Ocasio-Cortez, Cornel West, Cynthia Nixon, and of course, Sanders himself.)