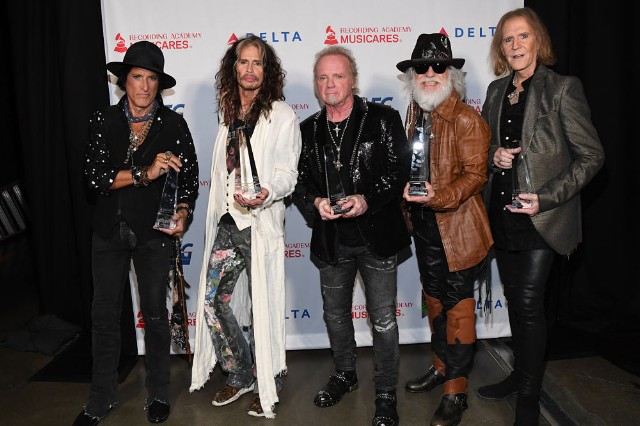 Aerosmith poses ahead of being honored as MusiCares' Person of the Year CREDIT: Kevin Mazur/Getty Images

After a month of squabbling, Joey Kramer is back in the saddle with his Aerosmith bandmates.

On Monday night, Kramer rejoined his Aerosmith bandmates on stage in Las Vegas for their entire set. The band’s string of shows in Vegas are part of their “Deuces Are Wild” residency at Park MGM Theater.

This was Kramer’s first appearance with Aerosmith since April 2019 after he suffered a shoulder injury.

Kramer’s participation in Aerosmith was in doubt as recently as three weeks ago.

The drummer sued his Aerosmith bandmates last month so he could perform with them on stage. To prove that he was healthy, Aerosmith was going to make Kramer perform with a click track in the rehearsals leading up to that weekend’s events. Kramer lost the bid to drum with Aerosmith on stage at the Grammys.

“I knew filing a lawsuit was a bit of an uphill battle,” Kramer said in a statement to the Associated Press after the judge announced his decision. “I can hold my head high knowing that I did the right thing–to fight for my right to celebrate the band’s success that I have dedicated the better part of my life to helping build.”

However, things are clearly looking up for Kramer and his Aerosmith bandmates.

Check out footage from the show below: