Home » Features » Interviews » Grey Daze’s Sean Dowdell on Finishing Their New Album Without Chester Bennington: “It Literally Grinded on Me”

Last week, the Phoenix-based Grey Daze announced plans to release their first album since 1997. The band, which was Linkin Park singer Chester Bennington’s first, had started to put together new music before Bennington died in 2017. Before his death, Bennington reached out to Grey Daze drummer Sean Dowdell and expressed interest in revisiting their earlier material. Despite Bennington’s death and a period of mourning, Grey Daze pushed forward and ultimately completed Amends.

The album, which is out on April 10, features newly recorded music with re-mastered vocals from the group’s long out-of-print and largely undiscovered catalog. Grey Daze was active from 1993-1998.

Dowdell, bassist Mace Beyers and guitarist Cristin Davis culled through and selected the tracks from the band’s mid-90s catalog (which is mostly unknown) and re-recorded the music in 2019 to accompany Bennington’s re-mastered vocals. The album is produced by Jay Baumgardner.

We caught up with Dowdell shortly after the announcement of the band’s new album. He detailed the origins of the Amends, discussed what it was like working on this material with Bennington. 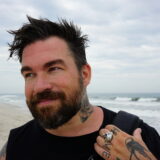 How did the idea to re-record Grey Daze music come about?
Sean Dowdell: In 2016, Chester called me and he told me that he thought it was time to throw another Club Tattoo party (He and I were business partners in the luxury studios in Arizona and las Vegas). We had not thrown one in years and he thought it would be really cool to put Grey Daze back together for the 20th anniversary of our last record at the same time.

What was it like working on music with Chester?
It was great, simply. He was easy to work with, open to ideas and creative as hell. He was a musical genius in the sense that he could write vocal melodies like no one I have ever seen. He and I would write most of the lyrics together and that was always fun. We worked very well together and I think he and I both missed it and wanted to get back to working with one another.

Why did you want to move forward with this project after his death?
It literally grinded on me every single day and I could not get it out of my head. I think he was pushing me from beyond to finish it. It just needed to be done, the songs were great. Chester’s performance was great and the world needs to hear him again and in a different light. It took me a while to get to that decision after his death, but I am glad we finished it and I know he is as well.

You guys were in the process of re-recording music when he died. How far did Chester get on this project?
We had just started to strip the masters down and re-track guitars with Sylvia Massy (we did not move forward with her after Chester passed). Chester and I would throw the tracks back and forth via email and talk about how we wanted to approach the songs (we had been working on three songs when he passed).

Were there ideas he had for it that he had expressed? Were you able to bring those to fruition?
Yes, we started coming to the conclusion of re-recording everything and re-writing the songs to make them sound more current, that is as far as we got with the concept while he was still with us. I believe we did a great job of bringing that concept to light.

What made you want to finish the project now?
As I said before, it grated on me every day for many months to pick up and get it finished. I was initially just going to work with Mace and Cristin and we would self finance the entire project. It wasn’t about selling a ton of records, it was about getting it to completion so those who were interested in hearing it could.

How did you approach merging his pre-existing/original vocals with the new production?
We stripped down every song and threw the old music out. We worked on the arrangement of the sitting vocals and then literally wrote every note of drums, keys, bass, guitars etc around his vocal track.

What was it like to listen to vocals Chester recorded when he was 17?
He was only 17 on a couple of the tracks, most of the tracks he had matured a lot vocally and was 20-21 years old when he recorded them. It was difficult at first, very emotional to be honest. But after a few months, it became more normal and then it became so incredibly clear as to how much talent he really had, even at a young age. (These vocal track recordings were only a couple of years apart from Hybrid Theory).

You’ve said you felt “very protective” of Chester when he was in school. What did you and Grey Daze do to protect his memory with this album?
Everything we could. We made sure his vocals were pure, the emotional integrity was intact. We made sure to keep his memory and intention of every song intact. Everything we did was done thinking about the integrity of the original band’s intentions and what Chester and we started out to do together. He was like my little brother and the last thing we wanted to do was to exploit the situation and have it be something that he would not have been proud of. It was our goal to make something that we believe he would have been ecstatic to put out, and I think we did.

How different do the new recordings sound compared to the originals?
Almost every song on the album sounds like a song that would have been written and recorded this year, that is the biggest difference. We took the old grunge feel and kind of twisted that into keeping the angst and aggression that we had without disrupting or distorting the rock sensibility that we were known for and had developed with Chester.

How did the guest artists become involved?
I initially talked with Head [Brian Welch] from Korn on the phone and just asked him for an honest opinion. He called me five minutes later freaking out about how good he thought it was and wanted to know more about the project. So I laid it all out for him and just asked him (I knew he loved Chester and vice versa) if he was interested in maybe playing on a song or two. He said ‘Absolutely,’ and then within a week texted me and asked if [Korn co-founder/guitarist] Munky could play as well. I asked the guys and they were super excited to have both of them on a song and for Mace and I, it was important because we knew how much Chester looked up to those guys.

Once this happened, I knew there was a chance we could bring in a few “select” people to play with us on the record. After losing our original guitar player Bobby Benish in 2004 to brian cancer, we felt like it wasn’t necessarily about keeping the core members only. It took on a new feel, like we could connect a few people whom Chester would have loved to play with but maybe never did, and to get them to play a song or two and complete that vision.

What was it like to work with Jaime on “Soul Song”? How is he similar and how is he different from his father?
It was very special… he sounded great. Completely different than his father but was a complete pro and we had a great time. He is a lot more shy than his dad and quiet. But he is a great guy and we loved having him take part in this.

What gave you the idea to get his son involved with this project? What was his reaction?
During the recording process, I thought it would be cool to get Chester’s children involved as much as they wanted to be. He never got to record with any of his kids while he was here. So, I felt in a weird way that this was a gift I could give him back by including his kids. Jaime took us up on the offer and came in to sing on “Soul Song.” He loved it and I think it was very special for him as well.

How do you think Chester would feel about the final results?
He would be ecstatic, I know it. He loved the songs already and if he would have had the time and production teams in place to make them better he would have. He had a huge hand in getting this done from beyond, I am sure of that.

Do you plan to go ahead with a Grey Daze reunion show? And if so, who would you like to do the vocals?
Not really. That was not the intention when we started out on this, nor when we decided to finish the record. This was about finishing something with our friend. So…it would feel a bit disingenuous to say here is three years worth of work with our friend and singer, and now here is our new singer…Not something we want to be a part of. That being said, if we do decide to do anything live, it has to be in a tribute fashion to Chester, not as a replacement for Chester.