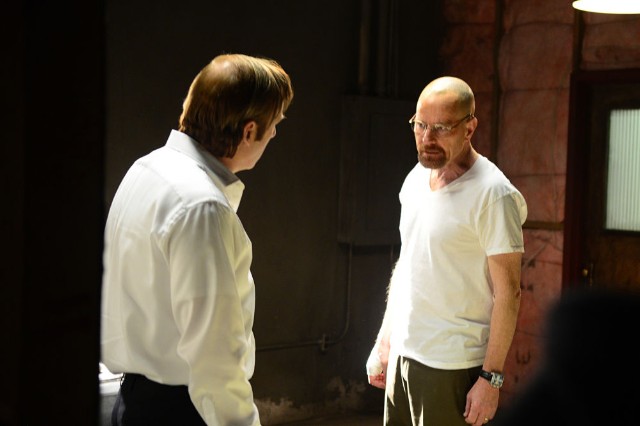 Better Call Saul is finally back this Sunday, and as much as we’ve missed the twists and turns of the Breaking Bad universe, we have to be honest: We’ve also missed the songs. Better Call Saul and its predecessor have a rare gift for pairing songs and images in the most unnerving ways possible, whether by mixing AM gold ballads with body-disposal scenes or meth montages with poppy psychedelia.

Better Call Saul co-creators Vince Gilligan and Peter Gould, along with their entire team, are known for tight, efficient writing that doesn’t leave any trap un-sprung. But the shows never miss a musical opportunity, either. Every song selection serves the plot or tells us about the character and state of mind of the person on-screen. Sometimes, that person is even singing along. Because if you whistle while you cook meth, everything goes by that much faster and is less likely to explode. (Okay, maybe not.)

Here are our nine favorite musical moments from the Breaking Bad universe.

The opening guitar riff is charming, but have you ever heard the whole song? Little Barrie morphs Junior Brown with Elliott Smith for a haunting set of verses that make throwaway guarantees of the sort that turned Jimmy McGill into Saul Goodman. Pang for the ‘90s, an era of noncommittal lyrics, listening to lines like “Kill communication/stepping up the grid/just to let me know/to maybe go by time.”

After months of cooking meth, the mysterious Heisenberg finally hit the big time when he earned his own narco ballad, courtesy of Los Cuates de Sinaloa. The song, “Negro y Azul” (Black and blue), detailed the quality of his blue meth. We may never know if Walter White even knew about the song that celebrated his criminal exploits, or if it existed in the Breaking Bad universe, or just as a meta-commentary for those of us who follow it.

Daddy, what’s juxtaposition? Well, it’s pretty simple, boy. Remember the episode of Breaking Bad that depicted a prostitute named Wendy hustling for meth at a seedy hotel by the freeway set to the tune of The Association’s bouncily hopeful 1967 hit “Windy”? That’s juxtaposition.

How to endear Gale to audiences forever just before Jesse kills him for the most savage reason possible? Perhaps just have him charmingly perform a cute old Italian song while puttering around his apartment? Perfect, everyone loves him now — aaaaaaaand then he’s dead.

For our money, there’s never been a colder needle drop than at the conclusion of Breaking Bad’s brutal fourth season, when we saw the depths of White’s ruthlessness and the blackness of his heart. Cue a Danger Mouse progression that starts like a demented take on “Hotel California” and gets less forgiving with the addition of a gorgeously unsentimental Norah Jones vocal, bells, and a bassline that doesn’t care what you think.

Gilligan and Co. perfected the art of the ironic montage with its use of the free-floating Tommy James and the Shondells ballad about… whatever “Crystal Blue Persuasion” is about. In the Breaking Bad universe, it’s about White’s technique of cooking his special brand of artisanal blue meth. Somehow the show had the discipline to wait until nearly the end of its run to use the most perfect song imaginable.

We can’t find the actual montage online (rights, y’know?). But fans have made scads of tribute videos, including this one:

May we recommend you not watch the video below if you don’t already know how Breaking Bad ends? Okay, we’ll give you a hint: It ends with the most on-the-nose musical number imaginable. Badfinger, the group that provides the song, has “bad” in its name. The song has the color blue in its title. And the first lines sung by Badfinger lead singer Pete Ham are “Guess I got what I deserved” — which is pretty much exactly what Walter White must be thinking as he gets what he deserves. It’s almost as if Gilligan, who was practically a baby when the song came out in 1971, wrote a whole show just to make perfect use of “Baby Blue” at the end. Wait, did he?

Better Call Saul perfectly captures the awfulness of a bunch of co-workers doing karaoke, but layers the drunken moment with heart and nuance. When Jimmy calls Chuck onstage for an ABBA duet, of course Chuck turns out to be great at karaoke, and much better than his little brother. But as we sadly know, the winner in their brotherly rivalry does take it all, in a way he never wanted.

“Sharing the Night Together” (El Camino: A Breaking Bad Movie)

Just when Todd couldn’t seem like a bigger sociopath, we get to watch him driving through the desert with an enslaved Jesse and a rug-wrapped corpse, singing along with a 1978 soft-rock masterpiece by Dr. Hook: “If I seem to come on too strong, I hope that you will understand.” We understand completely, Todd — now please don’t kill us.