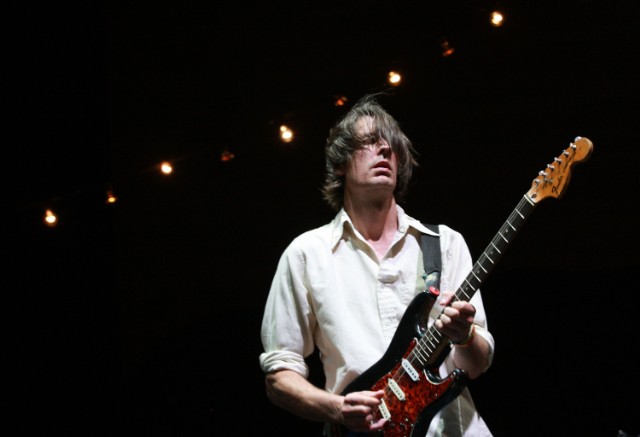 David Berman would have celebrated his 53rd birthday yesterday, and numerous friends and former bandmates took the occasion to celebrate the Silver Jews and Purple Mountains songwriter’s passing.

Amid tribute shows in New York and Philadelphia, the Portland-based zine chickfactor held their own night of performances at Bunk Bar, which included sets from Pavement members Stephen Malkmus and Bob Nastonovich, as well as the Spinanes’ Rebecca Gates, William Tyler, Clay Cole, Frank Bruno, Red Ronne, A Certain Smile, and more.

As Stereogum points out, Malkmus and Nastonovich performed together, covering American Water’s “Random Rules” and the perennial Starlite Walker favorite “Trains Across the Sea.” Elsewhere in the night, William Tyler and Rebecca Gates teamed up to cover Berman’s Purple Mountains standout “Snow Falling in Manhattan.”

David Berman died this past August of what was later ruled a suicide. Since his death, numerous musicians have paid homage to the songwriter, both on social media and in tribute covers of their own. Watch footage of Berman’s birthday celebration below and revisit our review of the songwriter’s excellent 2019 album Purple Mountains here.

I want Rebecca Gates and William Tyler to record this cover of “Snow Falling in Manhattan” like, tomorrow. These uncannily apt lyrics come right after I stopped recording: Songs build little rooms in time And housed within the song’s design Is the ghost the host has left behind . #davidberman #purplemountains #rebeccagates #williamtyler