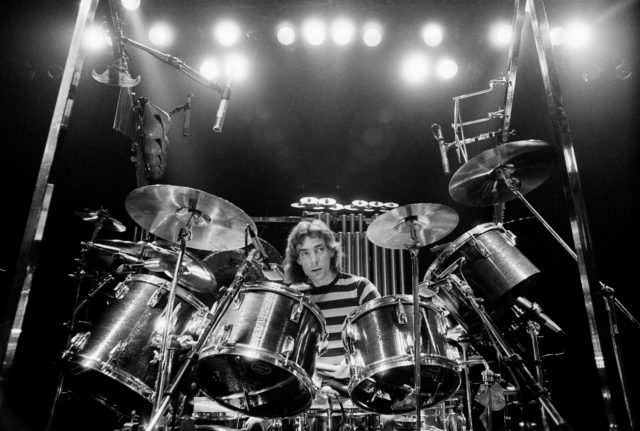 Rush drummer and lyricist Neil Peart died on January 7 from brain cancer, according to a statement from a family spokesperson. When news broke of the legendary prog percussionist’s death broke on January 10, a diverse array of artists took to social media to pay their respects, including his own bandmates.

“It is with broken hearts and the deepest sadness that we must share the terrible news that on Tuesday our friend, soul brother and band mate of over 45 years, Neil, has lost his incredibly brave three and a half year battle with brain cancer,” they shared in a statement posted to social media.

The surviving members of Rush—Geddy Lee and Alex Lifeson—also encouraged fans “to make a donation in Neil’s name” to a cancer charity of their choosing.

Given Peart’s mastery of percussion and phenomenal musicianship, it’s no surprise that everyone from Gene Simmons, to Superchunk, to Dam-Funk are also saying their goodbyes and recognizing his talent.

“The master will be missed – Neil Peart RIP #RushForever,” Jack Black tweeted, along with a classic photo of the drummer behind a kit.

Here’s how other musicians are remembering Peart:

Sorry to hear this. https://t.co/cZWcAj1p2Y

Thank you Neil. Thank you for inspiring me and for all your help and advice along the way, especially in the early days when you took the time to talk to a young green Danish drummer about recording, gear and the possibilities that lay ahead… Thank you for what you did for drummers all over the world with your passion, your approach, your principles and your unwavering commitment to the instrument! Rest In Peace.

My prayers and condolences to the Peart Family, Fans and Friends. Neil was a kind soul. R.I.P……. Rush Drummer Neil Peart Dead at 67 – Rolling Stone https://t.co/icYz6fnXfE

Absolutely Horrible News. Neal Peart has died after fighting brain cancer for years. His later life was filled with so much family tragedy. So, so sad. I’m just shocked. pic.twitter.com/EM4Ea1quaY

Thank you Neil for all of the amazing music you gave us. You were truly a inspiration for not only EVERY drummer, but for every musician… I will be listening to Rush all day today in your honor. RIP Neil Peart… #rush #drumlegend #heartbreaking

We're at a loss for words upon hearing of the passing of Neil Peart. A true legend. Rock out for him this weekend.https://t.co/AdHIpbpaby

RIP Neil Peart. Idol of my first band's drummer & yet we could never cover any of their songs. Too hard! #workingman #spiritofradio #RUSH #neilpeart

So sad to hear of the passing of Neil Peart. Our thoughts are with his family and bandmates.

I’m deeply shocked and saddened by the news of one of my favorite drummers of all time has passed away today. Thank you for everything Neil Peart. You Will be sorely missed and never forgotten. RIP ❤️#rush #neilpeart

Such a loss, one of my favorite musicians of all time. His influence and music will live on through anyone who picks up an instrument #neilpeart

I can’t help thinking he’s chuckling somewhere knowing hundreds of bands with gigs tonight are trying to figure out “an easy Rush song.”

…dude…fu%+in Neil The GAWD. All respect due to the legend. RIP.

At the end of a crazy @rockhall night in 2013 where @rushtheband & @PublicEnemyFTP were inducted. It was just myself & Neil PEart alone talkin & laughing low in relief the long night was over-a small table backstage sharing a unique moment without much word. Rest in Beats my man

Over 20 years ago, one of my best friends John Kastner(@jeanguykastner ) brought Neil Peart to my house in Laurel Canyon. We stayed up all night drinking whiskey and talking on more subjects than I knew existed. He was the friendliest curmudgeon in the world. We’ll miss him.

So sad to hear about Neil Peart passing. My deepest condolences to his family, friends and fans. #NeilPeart pic.twitter.com/B8tM4ZcIQQ

This is so incredibly sad. Neil, Geddy & Alex changed my life as a young, aspiring bassist. Neil was the top of the list for rock drummers to me and so many in my generation. Condolences to the family and… https://t.co/BetMUoUDbL