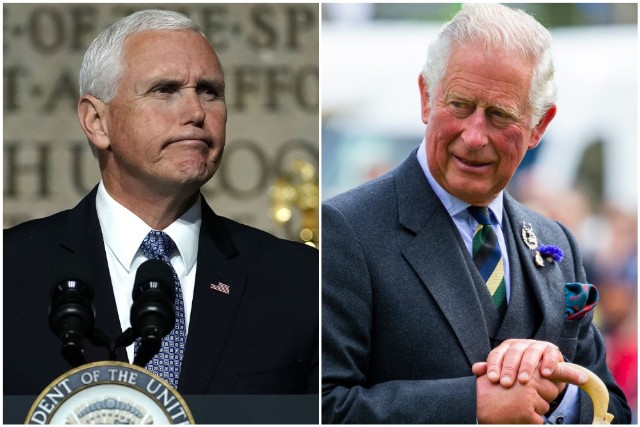 A viral video making the rounds appears to show Prince Charles completely big timing Mike Pence by refusing to shake his hand while greeting a receiving line of dignitaries at the World Holocaust Forum in Jerusalem on Thursday, January 23.

Now, I’m not one to cheerlead any monarchy in this, the second decade of the Willennium. The British Royal Family in particular feels like an increasingly obsolete relic with its own history of deeply sketchy behavior who lives off of wealth plundered from several centuries of oppressive colonialism. That said, I’m not gonna pass up an opportunity to watch the world’s worst party guest and an unabashed homophobe get humiliated on camera.

In the footage below, Prince Charles warmly greets and shakes hands with one dignitary before gliding right past the vice president and first mother/second lady Karen Pence.

The Pences seem to exude a palpable anxiety as they wait for the Prince of Wales (or “Prince of Whales,” per Donald Trump) to acknowledge them. At one point, you see Mike Pence’s impotent reach for a handshake only to withdrawal after Prince Charles moves on to shake Israeli Prime Minister Benjamin Netanyahu’s hand. Ouch.

The veep’s team denied that Pence was snubbed.

“Vice President Pence and the Second Lady spoke with Prince Charles for five minutes in the pre-program before they entered the hall,” Pence’s spokesperson Katie Waldman said in a statement issued to USA TODAY. “Also they shook hands at the end of his remarks.”

Waldman also released photographic evidence of the two men seeming to enjoy each other’s company to bolster her claim.

This is not true. VP and Prince Charles spoke prior to entering the event floor and after his remarks as well. https://t.co/Qr79TN42Ax pic.twitter.com/LhsQVtHMRF

It’s always a good look when your team has to make a public statement and release photographic evidence and various receipts to announce to the world that people can actually stand to be around you.

What an Absolute Moron

Lady Gaga Slams Mike Pence: “You Are the Worst Representation of What It Means to Be a Christian”