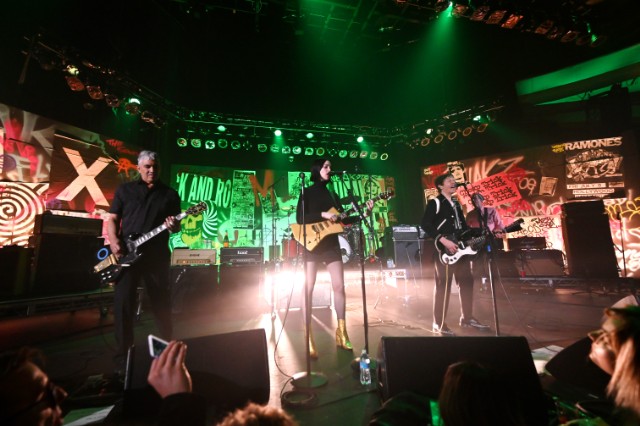 When Dave Grohl is hosting a gig, you never know who he’s got hidden away backstage. Case in point, John Travolta was apparently hanging out backstage at the Art of Elysium’s Heaven Is Rock and Roll gala in Los Angeles on January 4. The Pulp Fiction star shared a photo of “a special moment” which entailed the actor hanging out with the surviving members of Nirvana, including Grohl, Krist Novoselic, and Pat Smear.

The image consists of 65-year-old Travolta somehow looking like the youngest person in the room while rocking a Bond villain-esque outfit. Smear is the only person looking at the photographer as everyone else seems captivated by something happening off camera. It kind of looks like a band photo with Travolta in the role of brooding frontman/songwriter.

According to the Instagram caption, Travolta headed over to the show after “kicking off award season 2020 with a For Your Consideration screening of The Fanatic,” the horror film he made with director Fred Durst. The Fanatic has a 17 percent critics’ rating on Rotten Tomatoes, with Entertainment Weekly critic Christian Holub describing it as having “contempt for both its characters and its audience.” Travolta is waging an Oscars campaign regardless. God bless him.

Despite being a triple threat, Travolta didn’t join Grohl and company onstage to fill in for the late Kurt Cobain during the evening’s Nirvana tribute. That’s probably for the best. Although, the Grease star has a bit of a history joining Grohl’s other band, Foo Fighters, onstage for performances of “You’re the One That I Want” at two shows in 2018.