Forget a big stadium concert—that’ll come soon enough. It sounds like Green Day are looking to go back to their roots and play a more intimate gig as they prepare to drop their upcoming album, Father of All. Preferred location? A fan’s backyard, according to frontman Billie Joe Armstrong.

“Hey, looks like our new record’s coming out in a month or something, so we’re just planning some stuff, some surprises,” Armstrong said in a video posted to Instagram on January 7. “But one thing I was thinking is … does anybody have, like, a relatively big backyard that we can do, like, a backyard party somewhere? Maybe come play at your house, your garage,  your backyard? Or do you have a barn? Or is there a church or a church parking lot? Or, you know … I was conceived in a church parking lot!”

“Anyway, just hijinks, fun, mischief. Backyard party with your favorite band, Green Day!” he continued with a big grin. “Oh yeah, it’d have to be in California.”

Armstrong didn’t mention how fans might be able to submit their yards (or local place of worship) for consideration, but when one follower suggested in the comments that the band rock out at a Denny’s, he was more than excited about the idea. “I would LOVE TO PLAY DENNYS!!!!!” Armstrong exclaimed. 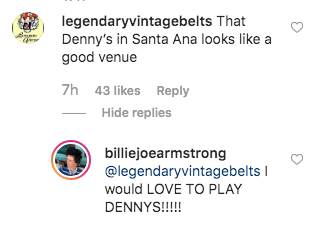 Green Day donated $2,000 to a GoFundMe in December after punk band WACKO played at a Santa Ana, California, Denny’s. Fans who were moshing during the set allegedly left some major damage, and the 17-year-old booker was stuck with the bill.

In addition to revealing their hopes to play in someone’s backyard, Green Day shared Father of All‘s tracklist on Instagram January 7. The songs are:

Armstrong previously told Billboard that the 28-minute album was inspired in part by Kendrick Lamar. “We wanted to create a dance groove with space between the drums and vocals [inspired by] the way Kendrick Lamar does things or old-school Motown music,” he explained, “where it’s leading with the rhythm.”

The singer also told Kerrang! that no way in hell would there be songs about Donald Trump on the record. “I draw no inspiration from the President of the United States, because he’s just … there’s nothing,” he said, before joking, “Trump gives me diarrhea, you know? I don’t want to write a song about it!”

Father of All drops on February 7. The band will embark on the “Hella Mega” stadium tour with Weezer and Fall Out Boy beginning June 13.