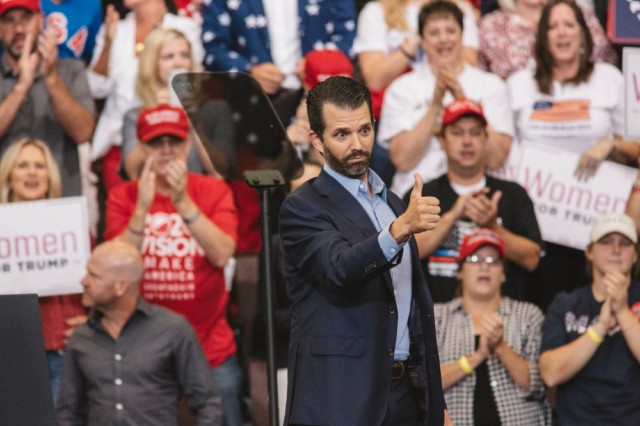 While his father was busy inciting World War III from the comfort of Mar-a-Lago, Donald Trump Jr. rang in the new year with his favorite new toy: an AR-15 assault rifle adorned with a cartoon Hillary Clinton behind bars.

The first failson posed with the gun for a photo posted on an Instagram on Sunday, January 5. “Nice day at the range,” Trump Jr. captioned the image. He also thanked two gun retailers for “adding a little extra awesome to my AR and that mag,” referring to the cartoon of an imprisoned Clinton on the assault rifle’s magazine. Incredibly normal stuff.

Nice day at the range. @rarebreedfirearms and @spikes_tactical adding a little extra awesome to my AR and that mag…

Perhaps more disturbing than the bizarre drawing of President Donald Trump’s former political rival is a medieval knight’s helmet, the Crusader cross design above the magazine. Any thinking person would perhaps deem it unwise to pose with a symbol harkening to wars European Christians waged against Muslims in the Middle Ages over control of the Holy Land at a time when POTUS has possibly caused another forever war with Iran. Any thinking person might also be cautious of posing with such a symbol at a time when POTUS has threatened to commit war crimes and attack “cultural sites” in Iran, risking the lives of countless civilians.

As one might glean from Junior’s other social media posts, thinking isn’t his strong suit.