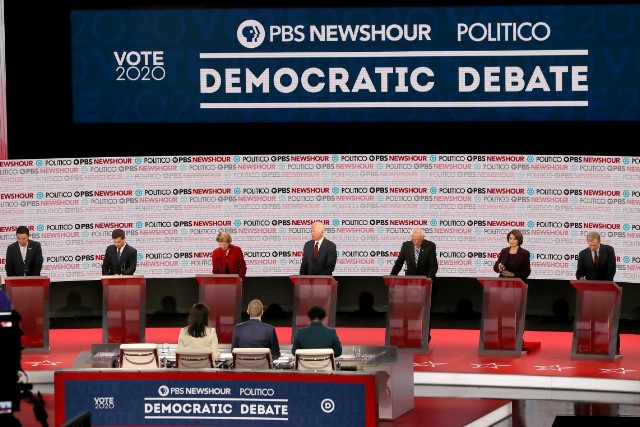 At last, after six Democratic presidential debates in 2019, there will be no more until 2020. The final one, held at Loyola Marymount University in Los Angeles on December 19, featured frontrunners former Vice President Joe Biden, Sen. Elizabeth Warren, Sen. Bernie Sanders, and Mayor Pete Buttigieg. Also making the debate stage were Sen. Amy Klobuchar, Tom Steyer, and Andrew Yang. (Sen. Kamala Harris dropped out of the race earlier in the month, while Sen. Cory Booker, Rep. Tulsi Gabbard, and six other hopefuls failed to qualify.)

Trump “is dumbing down the presidency beyond what I even thought he would do,” noted Biden, who called the impeachment a “constitutional necessity.”

While the Democratic presidential hopefuls were discussing his impeachment in the first hour of the fifth debate, Trump was doing the same—surprise!—on Twitter.

Another hot topic was the climate crisis, which came up even beyond the specific questions asked. Klobuchar called it an “existential crisis,” while both Sanders and Steyer said they’d “declare a state of emergency” immediately upon taking office. Steyer also noted that while climate change is “our biggest crisis,” it’s also “our biggest opportunity,” which Biden agreed with.

The debate also addressed President Barack Obama’s recent comment that women are “better” leaders than men, and that “If you look at the world and look at the problems, it’s usually old people, usually old men, not getting out of the way.”

“I got a lot of respect for Barack Obama, but I think I disagree with him on this one,” Sanders said regarding the comment about old men. “It may be a little self-serving, but I disagree.”

Biden quipped about his former boss, “I’m going to guess he wasn’t talking about me either!”

But it was Warren who had the best response when Alberta said that she’d be the “oldest president ever inaugurated.” “I’d also be the youngest woman ever elected!” she shot back.

While there were plenty of notable moments, perhaps the most cringeworthy of the evening? When moderator Woodruff kept looking right at Steyer and addressing him as Yang while Yang—who was on the opposite end of the stage—kept telling her, “I’m over here! I’m over here, Judy,” even clapping to try to get her attention.

The questioning ended with an unexpected query from Woodruff: What would the candidates give to each other as gifts, and who would they ask for forgiveness? She threw to Yang first, who was understandably stumped. But after a moment, he offered to give everyone on stage a copy of his book.

Which candidate do you think did the best?