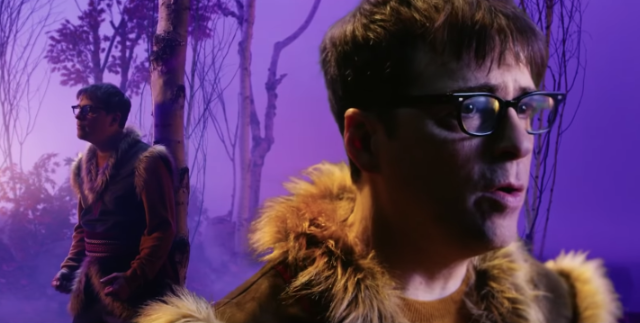 Weezer dropped their Frozen 2 soundtrack single “Lost in the Woods” last month, and now the cover-loving power-pop four-piece have returned with a new video for the track. The video includes a guest appearance from Kristen Bell, who lends her voice to the character of Anna of Arendelle in the Disney film.

The clip opens with shots of Rivers Cuomo and co. dressed in Nordic furs, wandering around a film set featuring sparse foliage and heavy purple lighting. In the few moment’s he’s not seen shredding along to the power ballad, Cuomo is presented as a aimless traveler pining for Bell’s character. Within the context of the film, the song is sung by actor Jonathan Groff in character as Kristoff Bjorgman, with Weezer’s version of the song featured prominently in the end credits.

Frozen 2 opened in theaters on November 22. The soundtrack also features prominent contributions from artists like Kacey Musgraves and Panic! At the Disco, who both have new songs included on its commercial release. Weezer’s latest LP The Teal Album dropped back in January, with covers of Michael Jackson, Toto, Tears for Fears, TLC, A-ha, and more.

Watch their new video for “Lost in the Woods” below.