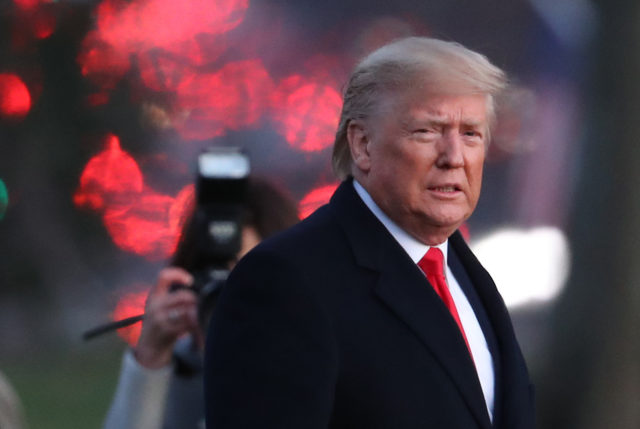 Donald Trump leaving the White House ahead of the impeachment vote on December 18. CREDIT: Mark Wilson/Getty

Musicians have long been vocal about politics, whether it was in their lyrics, urging fans to the polls, throwing fundraisers, performing at the White House, or sharing their thoughts on social media. It was no different when the House voted to impeach President Donald Trump on December 18.

Many immediately tweeted their opinions, including Motley Crue drummer Tommy Lee. “TRUMP!!!! Bye Felicia!!!!!” he wrote gleefully after the House voted on the two articles of impeachment: 230-197 for abuse of power, and 229-198 for obstructing Congress.

But not everyone was as thrilled as the Methods of Mayhem founder. Southern rock and country musician Charlie Daniels was less than pleased with the impeachment.

“Well, they did it. The House of Reprehensibles did it. Just wait until their wet dream turns into their worst nightmare,” he griped. But he wasn’t done. The next day, he shared his “morning prayer“: “Lord the politically ambitious and unprincipled power seekers have delivered a blow to the Republic. Let them know the bitterness of defeat from the citizens they betrayed, let them experience the wrath of a people scorned and the shame of selling out.”

And some were confused about what would happen next.

“Who our next president tho? I never seen one of these jawns happen lol,” admitted rapper Meek Mill before he added, “I can’t lie I’m waiting to see what trump got to say about this lol he should just go out wit a bang [laugh-cry emojis] he should go live on the gram.”

Read on for more musician reactions to the impeachment of President Trump.

Thank you to the House of Representatives for doing your constitutional duty. Everyone please call your senators and tell them to remove this evil man from office. https://t.co/IKEPnZE84B

Not gonna lie. I’m not even cautiously hopeful here.

We did it! We impeached the motherfucker!