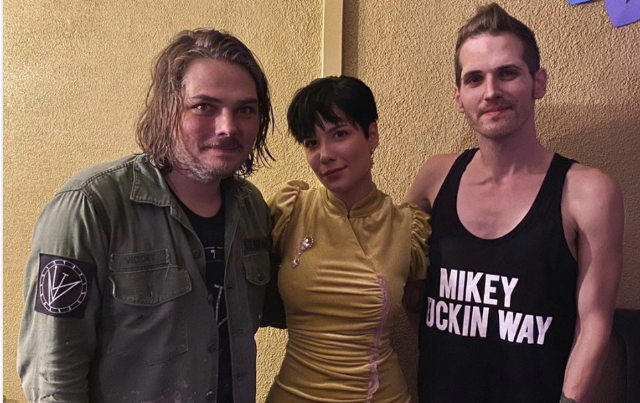 My Chemical Romance preformed their first show since 2012 last night in Los Angeles, and the entire room was up on their feet, giddy with the band’s return. Among hoards of screaming fans at the sold-out, 6,300-cap Shrine Auditorium, one figure stood out as an aging emo fan in her own way: Halsey. The pop songstress behind hits like “Without Me” and “Nightmare” is a surprisingly massive MCR fan, taking to Instagram to broadcast her excitement about the reunion.

“The best night of my entire life,” she wrote on Instagram, captioning a video of her belting out the words to the band’s Black Parade favorite “Famous Last Words.” Elsewhere in the night, she apparently caught up with the band members themselves, grabbing a photo with frontman Gerard Way and his bandmate and little brother Mikey Way.

the best night of my entire life. 🖤 @mychemicalromance

MCR’s reunion comes after months of speculation, during which the Jonas Brothers may or may not have inadvertently broke the news. After properly dissing the trio as a “Disney band” this summer, the band finally announced their official reunion in October—first with one performance in Los Angeles, and later with a series of additional stops in Australia, New Zealand, and Japan. The band originally called it quits in 2013 following 12 years and four albums-worth of unforgettable music.

See Halsey’s photo with the below and revisit our 10th anniversary feature on MCR’s landmark album, The Black Parade.

My Chemical Romance Reuniting For First Show Since 2012