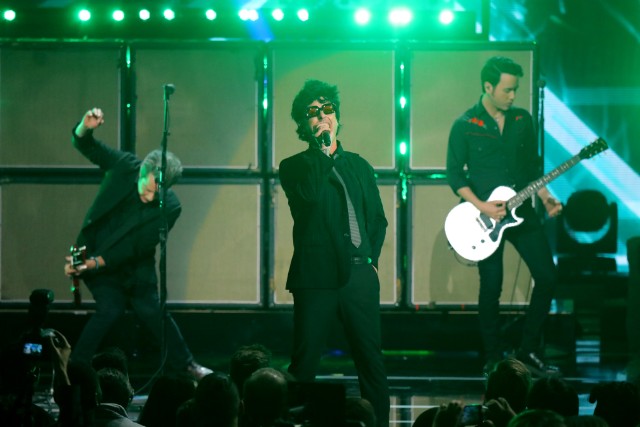 Earlier this month, an incredibly cool high school senior from Costa Mesa, California, decided to book a punk show in the back of a Denny’s. The band, WACKO, and a pretty sizable group of their fans reportedly started a mosh pit and and trashed the place; they were eventually kicked out, but not before leaving almost $2,000 worth of damage at the restaurant in their wake.

“There was damage done to one of the Denny’s tables,” police spokesman Lt. Anthony Bertagna told McClatchy News, according to the Sacramento Bee.

In a recent interview with Billboard, the 17-year-old booker, Bryson Del Valle, said that although the Denny’s manager “was super nice the whole time,” he was still asked for $1,800 “through cashiers check or money order” to cover the damage. Del Valle told Billboard, “I don’t even know what a money order is.”

Green Day helped Dell Valle reach his goal by donating $2,000 to the cause, and also included a message for the young promoter: “Hey Bryson call us! We wanna play the Bastards Club. Love, Green Day.” Reposting a receipt of the payment on their Instagram story, the band wrote, “the kids are alright.”

Wow, @GreenDay dropped $2k to help the #wacko kids and young Bryson in the aftermath of the Great Denny’s Punk Rock Riot of 2019. Special shout to @DennysDiner for renting a 50-person room to a 17year-old and then shaking him down for $1800 to cover the Moons of My Hammy Spread pic.twitter.com/5dDPsVBYI8

Green Day also tweeted the screenshot of their Instagram Story with the message, “father of all grilled cheese,” playing off the title of their forthcoming album, Father of All…

Denny’s said in a statement to Eater that the manager at that location of the restaurant chain was not aware a concert had been booked: “Denny’s is a family friendly restaurant and while we do have banquet space available at some restaurants, we do not allow events that can disrupt the dining experience of our guests. The manager was unaware a concert was planned, and the event organizers have been asked to pay for damages.”