Trump Complains About Having to Flush Toilets 15 Times 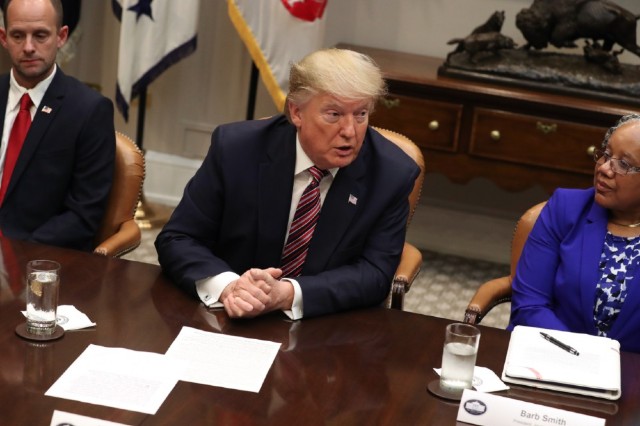 On Friday, President Donald Trump held a small business roundtable at the White House, but as usual, the free-wielding press gaggle ahead of the event took on a life of its own.

The purpose of the roundtable was to tout the Trump administration’s successes in supporting small businesses and to reaffirm the president’s commitment to red tape reduction. Apparently part of that plan entails doing away with energy-efficient lightbulbs, which Trump joked are the reason why he looks orange, rather than his pumpkin-hued foundation makeup.

“We got rid of the light bulb that people got used to,” Trump said, referring to White House staff removing said bulbs from certain rooms. “I hate to say it, it doesn’t make you look as good. Of course, being a vain person that’s very important to me. It gives you an orange look. I don’t want an orange look.”

Trump earned a big laugh break with that one from a group that must have missed him make the same joke in September during a spirited light bulb rant at a green energy conference in Baltimore.

"I hate to say it, it doesn't make you look as good. Of course, being a vain person that's very important to me."pic.twitter.com/R0p1baWKdY

Trump, however, saved most of his passion for a monologue about substandard water pressure, describing a scenario where people allegedly approach him all the time to discuss their toilet difficulties.

Trump added: “People are flushing toilets 10 times, 15 times, as opposed to once. They end up using more water. So EPA is looking at that very strongly at my suggestion.”

Here's the video, via WaPo, of Trump discussing toilet flushing: "We have a situation where we're looking very strongly at sinks and showers, and other elements of bathrooms … You turn on the faucet and you don't get any water … People are flushing toilets 10 times, 15 times." pic.twitter.com/pPE0im4RxL

Reuters reporter Jeff Mason tweeted a photo of the most underrated aspect of any Trump press spray: the guests and admin officials who have to sit there with a straight face and pretend Grandpa is making sense.

Trump expresses frustration about water efficiency, says sinks don’t have enough pressure and people have to flush toilets multiple times. He says he has directed the EPA to look at opening up water standards. It’s called rain, he says, referring to states with lots of water. pic.twitter.com/pwvzqULeGB

Anyone who doesn’t value their free time should feel free to check out the entire presser below.