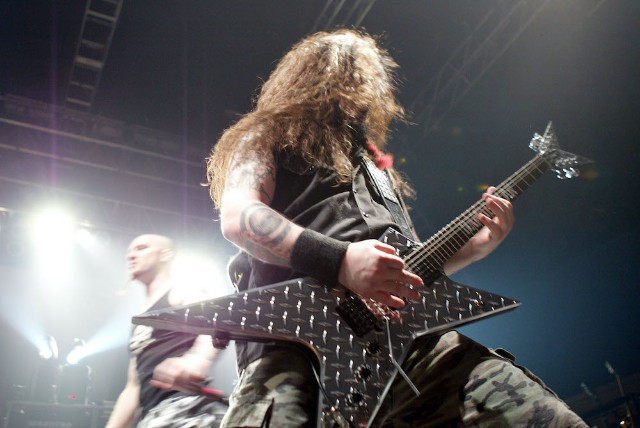 Rita Haney still thinks about the love of her life every day. She met “Dimebag” Darrell Abbott when both were eight years old, in Texas in the mid-’70s. They became a couple in 1984, and stayed together until his death in December 2004. Around this time of year, Haney says, the memories of her two decades with the legendary Pantera guitarist become particularly intense.

One such flashback came on the night before Haney spoke with SPIN for this article. Her cat, Dracula, took a leap from the bathroom onto her bed and landed on top of her. “It made me think of Darrell, because he would do that to me all the time,” Haney said. “If he went to the bathroom in the middle of the night, he’d always come flying out, and he’d just launch himself onto the bed.”

The last time Dime pulled this stunt, he didn’t stick the landing. The guitarist slammed into the bedframe and buckled to the floor in pain, Haney says. He’d injured the intercostal muscles of his ribs, requiring him to wear a brace whenever he performed with Damageplan, the group he formed in 2003 with his brother, the late Pantera drummer Vinnie Paul Abbott, after their most famous band broke up the same year.

Fifteen years ago today, a gunman walked onstage while Damageplan were playing at the Alrosa Villa nightclub in Columbus, Ohio, and shot and killed Dimebag and three other people, before being killed himself by a Columbus police officer. The shooter, 25-year-old Nathan Gale, was an obsessive Pantera fan, and may have blamed Dime for their breakup. One former friend told reporters that Gale had claimed Pantera stole his identity and songs he had written, and that he planned to sue them.

“I always think about what we would be doing today,” Haney says. “I think about how much fun he would have had with technology today, and he would have used it to interact with his fans. He gave me such an amazing life while he was here, and he still gives me a purpose.”

To mark the anniversary of Abbott’s death, SPIN reached out to Haney and several others who knew the metal icon well and asked them to share their memories. They described an eccentric, hard-partying, kindhearted headbanger—a man who took a unique approach to life, whose love of music and strong drink was surpassed perhaps only by his love for the people close to him.

For Haney, many of the fondest memories take place in the home she shared with Dimebag in Arlington, Texas: hosting all-night parties with friends, or spending quieter days cooking in the kitchen. Dimebag was a culinary whiz with a particular love of spicy food, whose exuberant sense of humor infused even his cooking. “For some reason, he called shrimp ‘lobster chickens,’” Haney said. He bottled his own hot sauces, giving them names that riffed on classic Pantera albums:  “Vulgar Display of Sauce,” “Hot Sauce From Hell.”

“You heard the dude coming down the hallway before you ever saw him,” says Robb Flynn, frontman-guitarist for Machine Head, which spent three months in 1997 opening for Pantera. “He was loud and funny, and the life of the party. That dude was constantly on, especially if he was in public—he was just on. It was quite a sight to behold, him in action. It was exciting. It was like, ‘I am around a bona fide rock star.’”

Flynn has particularly vivid memories of a late night and early morning spent in a parking lot in Kalamazoo, Michigan, where the tour bus caravan had parked on the eve of a Detroit gig that was set to be the biggest of the tour. All of the bands on the bill stayed up hanging out in the lot, drinking and setting off fireworks.

“So, 3 a.m. rolls around, and I need to go to bed—we’ve got a huge show tomorrow and I need to be disciplined here,” Flynn says. “I’m up at 5:30 to go to the bathroom on the bus, and I glance out the window and I see Dime’s still awake. It’s him and two fans around him, and he’s standing on top of a VW bug, stripped down to his tightie-whities and his Chuck Taylors, doing back flips onto the roof of the bug. And I’m like, ‘What the fuck?’”

According to Flynn, Dimebag was still drunk—and still drinking—well into the next evening in Detroit. As Coal Chamber were playing their opening set, he showed up unannounced on stage, dancing, headbanging, and playing air guitar. Eventually, he grabbed one of Flynn’s guitars from a rack, began playing it without plugging it into an amp, and smashed it at the end of a song.

Pantera still had a set to play, which everyone figured was going to be a train wreck. “But Dimebag comes out and literally plays a flawless Pantera show,” Flynn says. “If I hadn’t seen it with my own eyes, I never would have believed this dude—who couldn’t even talk, backstage—would deliver like that. It wasn’t even like fucking real. He had amazing muscle memory.”

Dime replaced the smashed guitar at the following night’s show, interrupting Machine Head mid-set to offer Flynn a prototype from his own signature Washburn series. “He handed this guitar to me, and was like, ‘Sorry about last night, man—I fucking love you,’” says Flynn.

Don Jameison and Jim Florentine, comedians and former co-hosts of VH1’s That Metal Show, look back fondly on time spent with Dimebag as well. Jamieson recalls a Damageplan show that doubled as a gathering of Dime’s “New Jersey mafia,” a loose group of friends from the Garden State. “Dime told us, ‘I want the whole New Jersey mafia to come up at the end of the show to sing gang vocals for ‘Walk,’” Jamieson recounts.

After some shots—Jägermeisters and black-tooth grins for those looking to get drunk, Pedialytes for those who already drank too much—the mafia prepared to take the stage. “Dime looks back at us and goes, ‘Everyone knows the song, right? It’s three words: ‘Re.’ ‘Spect.’ ‘Walk,’” Jamieson says. “That’s two words, but we let it pass. It was one of those Animal House moments, so we were like, ‘Let him go, he’s on a roll.’”

“The thing with Dime is, when you were around him, you had to drink,” Florentine adds. “You had no choice but to drink.”

At a Damageplan show in Philadelphia, Florentine deliberately abstained from booze all night, knowing he’d be seeing Dime after the show. Sure enough, backstage, the guitarist handed him six shots of Jäger and instructed him to take all of them. “He’s like, ‘Come on’ and—look, I had never done more than three shots in one night before,” Florentine says. “But still, I did the six shots, in a row, and I’m immediately thinking, ‘This is going to end badly.’”

When Dimebag realized the bottle still had enough for one more shot left in it, he poured it out for Florentine and told him to drink a seventh. “When he’s not looking, I stick the shot behind a wall, like I’m in high school, hiding a beer I don’t want to drink because I’m going to throw up,” Florentine says. “He looks over at me and asks, ‘Where’s the shot?’ I’m like, ‘Oh, I drank it.’ Right away, he goes, ‘No you didn’t.’”

Dime searched the room for the missing shot. “Finally, he finds it behind the wall, and goes, ‘Why didn’t you drink it?’ and I tell him, ‘Well, I didn’t want to drink alone,’” Florentine says. “Without missing a beat, he goes, ‘Why not? George Thorogood drinks alone.’ It sounded reasonable at the time, so I drank the other shot. That night, I slept in my car, on the streets of Philadelphia, and slept until 6 a.m., throwing up out the door. I’m in my late 30s and I’m passing out, drunk, in my car.”

Mark Hunter, former singer of Chimaira, spent the summer of 2003 on Ozzfest tour, and met Dimebag at the Wisconsin stop. He’d heard a rumor that the guitarist and his drummer brother were going to sit in with Disturbed to play “Walk,” and rushed over to see their set.

Sure enough, Dime was standing near the stage. Hunter was on the phone with a friend and boasted about being in the metal legend’s presence. The friend demanded he put Dimebag on the phone. “Dime just started chatting with my buddy Paul like they’ve known each other for years,” Hunter says. “It was hilarious. I never saw anyone just jump into character like that—and I guess it’s because Dime wasn’t a character. That’s who he was. He was everyone’s best friend.”

Hunter made his way to the side of the stage, where Disturbed singer David Draiman invited him to be a part of the “Walk” performance as well. “There I was, headbanging to Dime and Vinnie, singing ‘Walk,’” Hunter says. “This was one of the highlights of my career.”

The Art of Shredding

Rita Haney believes that Dimebag would have done anything in his power to reunite Pantera had he not been killed 15 years ago. The band split up about a year before that, as frontman Phil Anselmo struggled with a well-documented heroin addiction and focused on his other projects, Down and Superjoint Ritual.

Haney, who now works to keep Dimebag’s legacy alive by organizing annual events (including the upcoming Dimebash 2020), says Darrell was working on new music when he was murdered, and that there are four instrumental songs featuring heavy guitars and drums which he’d written and recorded on a 4-track. One of her goals is to get both Anselmo and Pantera bassist Rex Brown to collaborate on finishing the tunes.

“Them four is what made that magic, and I think it all would have been fixed—I know it would have, because Darrell wanted to get Pantera back together, and if he wanted something bad enough, he made it happen,” Haney says. “He was just that magical. Yes, he went out and did something he didn’t want to do with Damageplan: start at ground zero. But to him, in his mind, he was always Pantera.”