President Donald Trump, Vice President Mike Pence, and first lady Melania Trump surprised the press corps with an appearance by Conan, the military dog who was wounded in action while tracking ISIS leader Abu Bakr al-Baghdadi in Syria in October. The president is not an animal lover and has repeatedly balked at the notion of following in his predecessors’ footsteps and adopting a family pet to enhance his image. Perhaps Trump’s aversion to pets stems from his self-diagnosed germaphobia, or perhaps it’s a byproduct of his apparent lack of empathy.

On Monday, November 25, however, the president and first lady attempted to play the roles of two people who are completely comfortable in the presence of a dog while honoring the four-pawed veteran. For Melania, that meant smiling while standing as far away from Conan as possible while still remaining in the frame for photos. For the president, that meant bragging about what a bloodthirsty killing machine Conan is while avoiding petting or touching him at all costs.

“We were going to put a muzzle on the dog. I thought it was a good idea, but then it gets even more violent,” Trump said, leading some to wonder if he had ever met a dog before today. The president then joked about having the dog maul a reporter, before adding, “The dog is incredible. Actually incredible. We spent some good time with it. So brilliant. So smart.”

Despite all his praise for the canine, Trump displayed his flagrant disregard for dogs by referring to this very good boy as “it.” As for his breed, Conan is a Belgian Malinois, but since there’s no way in hell the president was going to absorb that information, he simply referred to Conan as “the ultimate fighter. The ultimate everything. Ultimate in terms of sniffing drugs.”

Trump on the dog that took part in the al-Baghdadi raid: "We were going to put a muzzle on the dog, & I thought that was a good idea, but then it gets even more violent…but no, the dog is incredible. Actually incredible. We spent some good time with it. So brilliant. So smart." pic.twitter.com/4r5227ofUD

“We actually just gave Conan a medal and a plaque,” Trump told reporters. “I actually think Conan knew exactly what was going on. But a dog that is very, very special.”

In all likelihood, Conan was probably pissed to be given a plaque and not treats or a tennis ball to drool on, but he hid it well. While being honored in front of the White House Rose Garden, Conan leaned against Pence in the hopes of receiving some affection. The vice president, a pet owner himself, was the only person besides Conan’s handler to actually touch the hero dog at the presser. 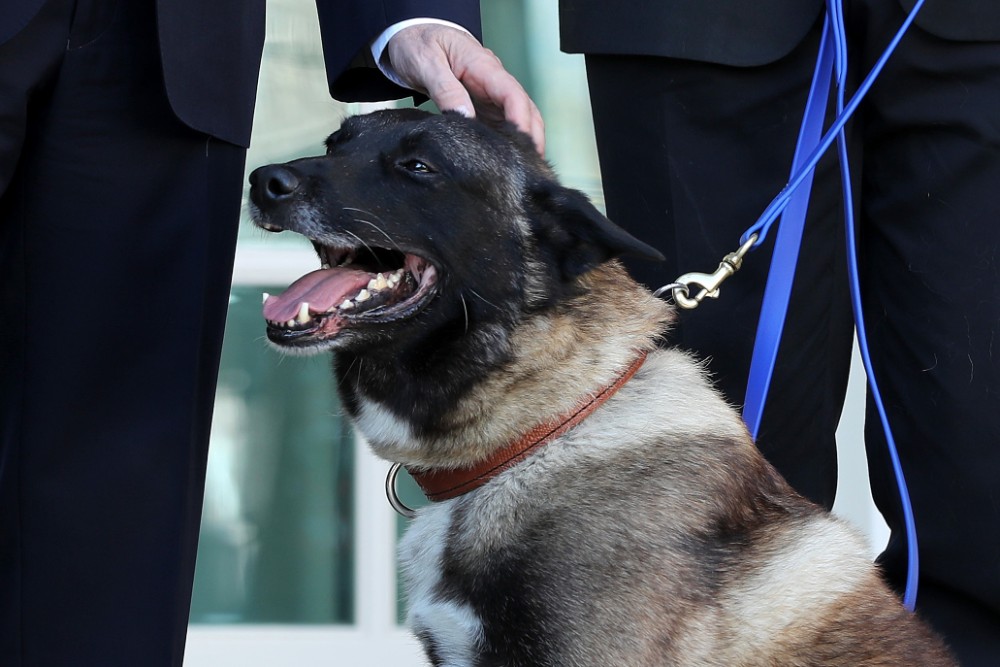 Upon leaving the presser, Melania was asked if she’d like to adopt Conan for their teen son, Barron. The first lady responded with a hair flip, a smile, and a simple “no” on the way back into the White House.

President Trump and First Lady Melania laughed when a reporter asked if they wanted to adopt Conan for their son, Barron. The first lady had a simple answer, “no.” Conan is the hero dog from the al-Baghdadi raid. pic.twitter.com/NyF2XkvUw0

Hopefully, Barron has recovered from the alleged heartbreak of 2016 when Palm Beach socialite Lois Pope tried to gift a 9-week old Goldendoodle named Patton to the Trump family after Donald won the election. Pope told The Washington Post that “this big smile came over” Barron’s face when she showed him a photo of the puppy.  She added: “It just brought tears to his eyes.”

Hey, kid, one day, when you’re living on your own, you can adopt all the dogs you want.