Every so often, the Fox & Friends brain trust of Brian Kilmeade, Ainsley Earhardt, and Steve Doocy are treated to a live on-air rambling phone call from President Donald Trump. It generally entails the morning show hosts smiling politely while failing to rein in an incoherent and self-incriminating monologue from the monster they helped create.

The president typically plows through anything resembling a pointed question while the Fox & Friends crew feebly try to redirect the extended soliloquy before surrendering to the Pandora’s box they’ve unopened and staring into the middle distance. Like so: 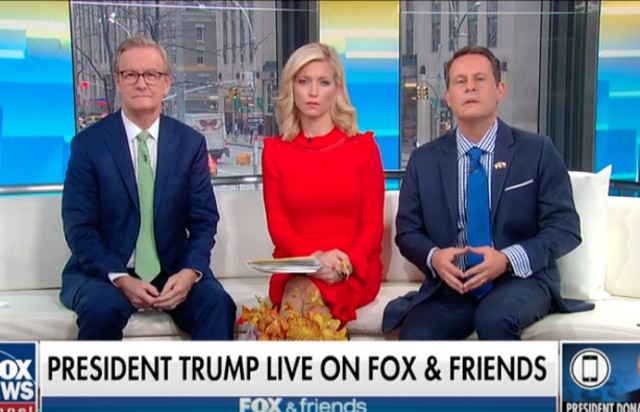 The calls function as a sort of Festivus, during which Trump can freely air his grievances regarding enemies both real and imagined, and espouse whatever right-wing conspiracy theory Stephen Miller whispers in his ear. Grandpa was especially fired up during a November 22 call to Fox & Friends over the week’s impeachment hearings.

For starters, the president continued smearing impeachment witness and ousted 30-year career diplomat Marie Yovanovitch. Trump tried to paint her as a nefarious deep-state plant attempting to undermine his presidency from the jump.

“This ambassador that everyone says is so wonderful, she wouldn’t hang my picture in the [Ukrainian] embassy … it took like a year and a half to get the picture up,” Trump complained of Yovanovitch. “This was not an angel, this woman … This was not a baby that we’re dealing with.”

Of course, Yovanovitch couldn’t hang what she didn’t have as the Trump White House didn’t even release their official portraits until nine months into his presidency because Trump and Pence kept delaying when to sit for them. In any case, her attorney issued a statement claiming that the embassy hung the portraits of “the president, vice president, and secretary of state as soon as they arrived.”

The president also accused Yovanovitch of being “an Obama person” despite her having served in both Democratic and Republican administrations. That was just one of the unsubstantiated accusations levied in Trump’s unhinged diatribe.

Trump goes after Marie Yovanovitch, who has served presidents in both parties for decades: "She's an Obama person. I said 'why are you being so kind?' 'Well, sir, she's a woman. We have to be nice.'" pic.twitter.com/LVEwKUrGIg

Trump saved some of his fury for House Intel Committee chair, Rep. Adam Schiff (D-CA), and managed to drop an anti-Semitic dog whistle in the process.

“Frankly, I want a trial,” Trump said of the committee chair who presided over the impeachment hearings. “The one I want to testify most is ‘Shifty Schiff.'”

Donald Trump: "All of those witnesses, they were all Shifty Schiffs" pic.twitter.com/yF2iyaHtoY

Trump also made sure to threaten to out the CIA whistleblower who kicked off the entire Ukraine investigation in his rant.

Steve Doocy: You said we know the name of the whistleblower, but we have no idea.

Donald Trump: I don't believe you.

Doocy: We've seen names online but we have no verification.

Trump: You don't need verification. You know exactly who it is. pic.twitter.com/qUPHi3DX0p

In a baffling move, the president took a shot at one of his most loyal defenders, Kellyanne Conway, by implying that she is abusive to her husband, conservative lawyer and outspoken Trump critic, George Conway. “She must’ve done some bad things to him, because that man’s crazy,” Trump declared. (POTUS sounds like a cool boss.)

If you don’t value the brevity of life, feel free to watch the entire nearly hour-long segment below and keep an eye out for Kilmeade’s audible, frustrated exhale at the 16:28 mark.