It’s become a badge of honor for athletes, rockers, authors, astronauts, actors, politicians, and pop culture icons to get The Simpsons treatment. And on October 13, it was Queen’s turn to appear on TV’s longest running scripted show.

The Fox animated comedy, currently in its 31st season, gave a nod to the legendary group in the intro to the episode “The Fat Blue Line.” Guitarist Brian May revealed the news in an Instagram post October 5, sharing an image of Homer looking just like late Queen frontman Freddie Mercury onstage at one of the band’s most iconic performances—Live Aid in 1985.

Aaay-O ! Doh ! Is this a ‘thing’ ? Apparently SO ! But I may have to wait a while. 💥💥💥💥 This is what Blabbermouth says : “This Sunday, October 6 on Fox TV in the U.S., you can see Homer and his family recreate QUEEN’s legendary Live Aid appearance for the latest episode of “The Simpsons”. See local listings for timings or visit www.fox.com/the-simpsons.” Well – dear folks in the USA – let me know how it goes !!! We don’t get Fox TV over here. 💥💥💥💥 And, by the way, since some of you have asked, yes – ssssh…. some material HAS been officially licensed to the fabulous Simpsons. Bri

Besides Queen, a host of music stars have made cameos, performed on, or been paid tribute to by the animated show, which turns 30 on December 17. Here’s a look back at some of the best and most memorable appearances by rockers in the show’s run (so far). 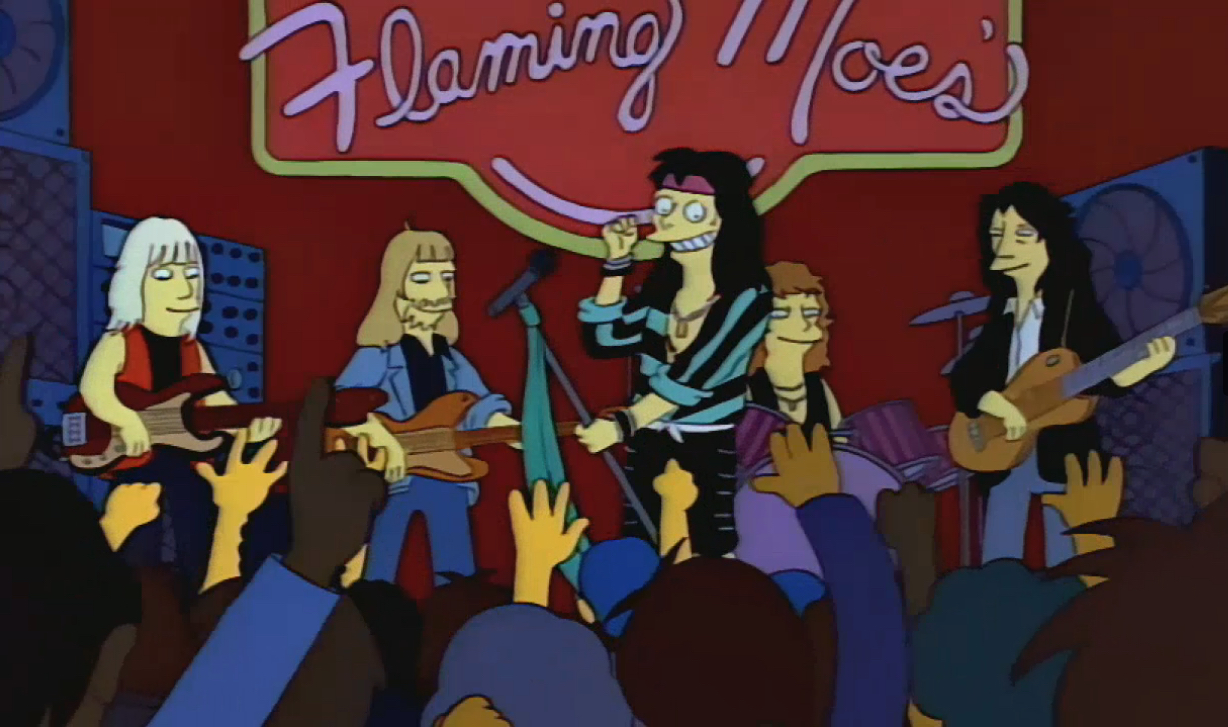 Aerosmith became the first stadium band to rock Moe’s after the bartender/owner enticed them onstage with the promise of some free pickled eggs. Steven Tyler may have gotten the name of the town wrong (St. Louis instead of Springfield), but the Boston combo’s performance of “Walk This Way,” which perfectly captured frontman Tyler’s stage moves in animation, left a memorable impression on the crowd and fans of the series. Especially pleased among the cast of characters was Jasper Beardly, who caught one of the Tyler’s trademark scarves that he threw in the crowd. 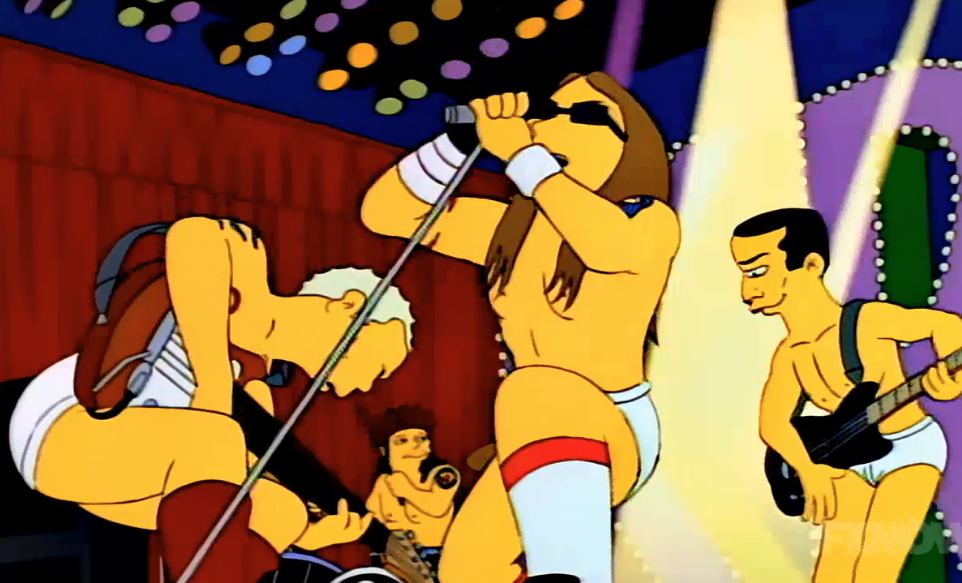 Luke Perry, Bette Midler, Johnny Carson, Hugh Hefner, and Elizabeth Taylor joined the Red Hot Chili Peppers in an episode in which Bart and Lisa worked to bring Krusty the Clown back to fame. Bart got RHCP to play a Krusty TV special after saving the California outfit from a crappy gig Moe booked them for.

At first, RHCP stood their ground when Krusty passed them some “network” suggestions to change their “Give It Away” lyrics. But when he proposed altering “What I got I gotta get and put it in you” to “What I’d like is I’d like to hug and kiss you,” they accepted (but you could totally hear the sarcasm in Flea’s voice). The band’s performance on the special didn’t use those suggested lyrics, but no one who’s seen the episode will ever be able to forget the group jamming out in their animated underpants. Thanks to RHCP, “Krusty Gets Kancelled” is a total classic. 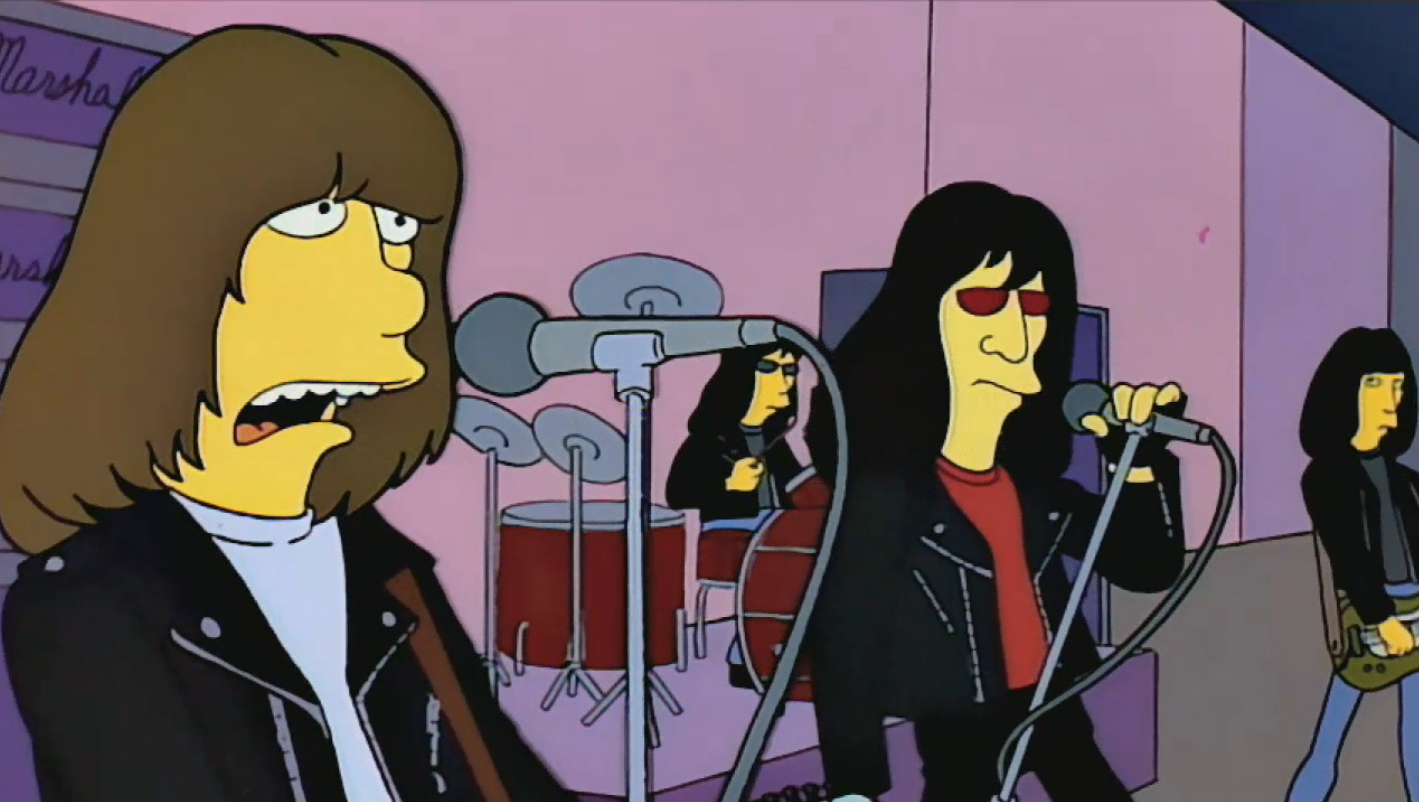 The legendary Ramones were Simpsons-ized in ‘93 as the punk rockers brought a driving version of “Happy Birthday” to a soiree for Mr. Burns. The New York band played a super-catchy rendition of the song, and as soon as they closed their set, did what so many Springfield residents wished they could do—they insulted the sinister businessman: “Go to hell, you old bastard!” Of course, Mr. Burns demanded that Smithers have the Rolling Stones killed after hearing that, not realizing which band actually played his event. D’oh! 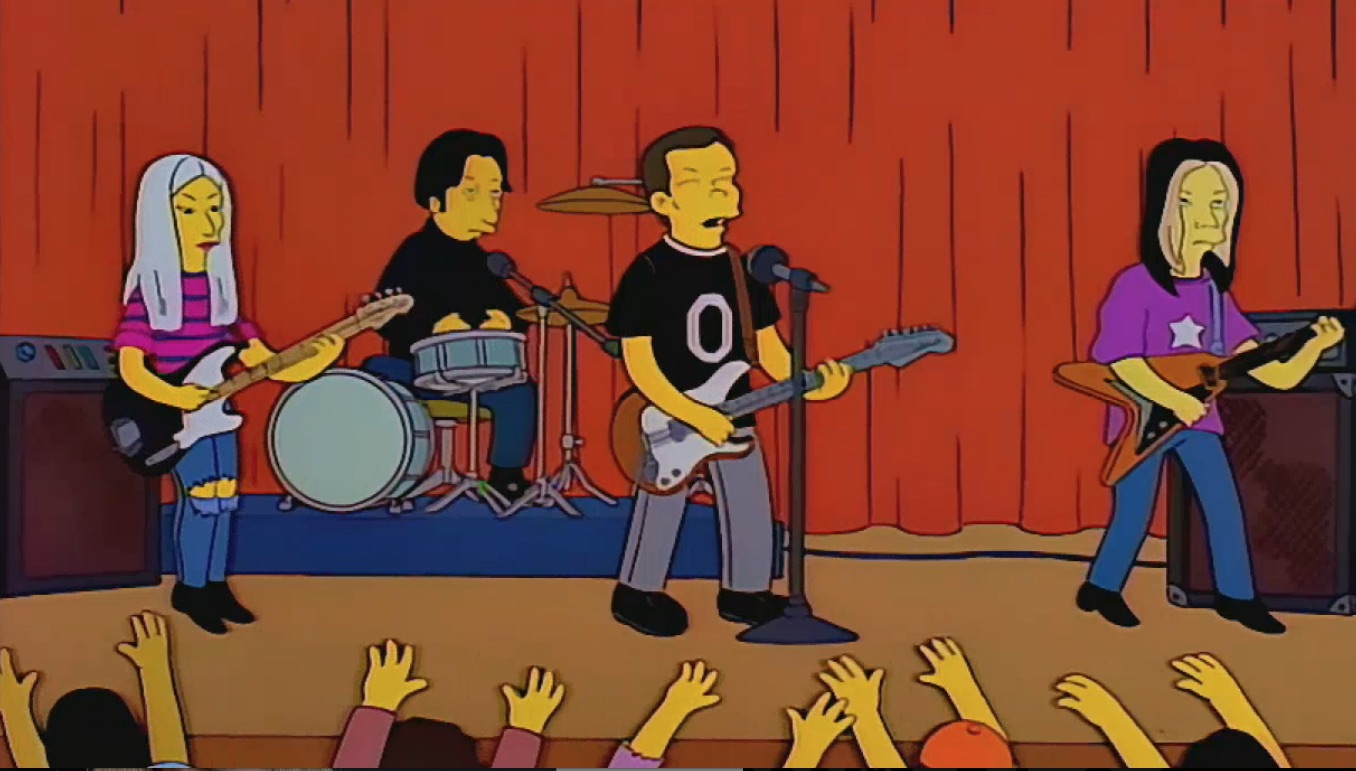 Fearing he’d become out of touch musically, Homer took Bart and Lisa to familiar-sounding traveling alternative music fest “Hullabalooza,” where The Simpsons took on grunge culture. The kids rocked out as Smashing Pumpkins performed “Zero,” and Cypress Hill tried to reunite a lost child with their family before their set.

Smashing Pumpkins were extremely good sports in “Homerpalooza,” which captured a moment in time. “Thanks to your gloomy music, [my kids have] finally stopped dreaming of a future I can’t possibly provide,” Homer told Pumpkins frontman Billy Corgan, who hilariously replied, “Well, we try to make a difference.”

Sonic Youth also cropped up in a fun food-related cameo. The band swiped a giant watermelon slice from Peter Frampton‘s cooler—as one does. 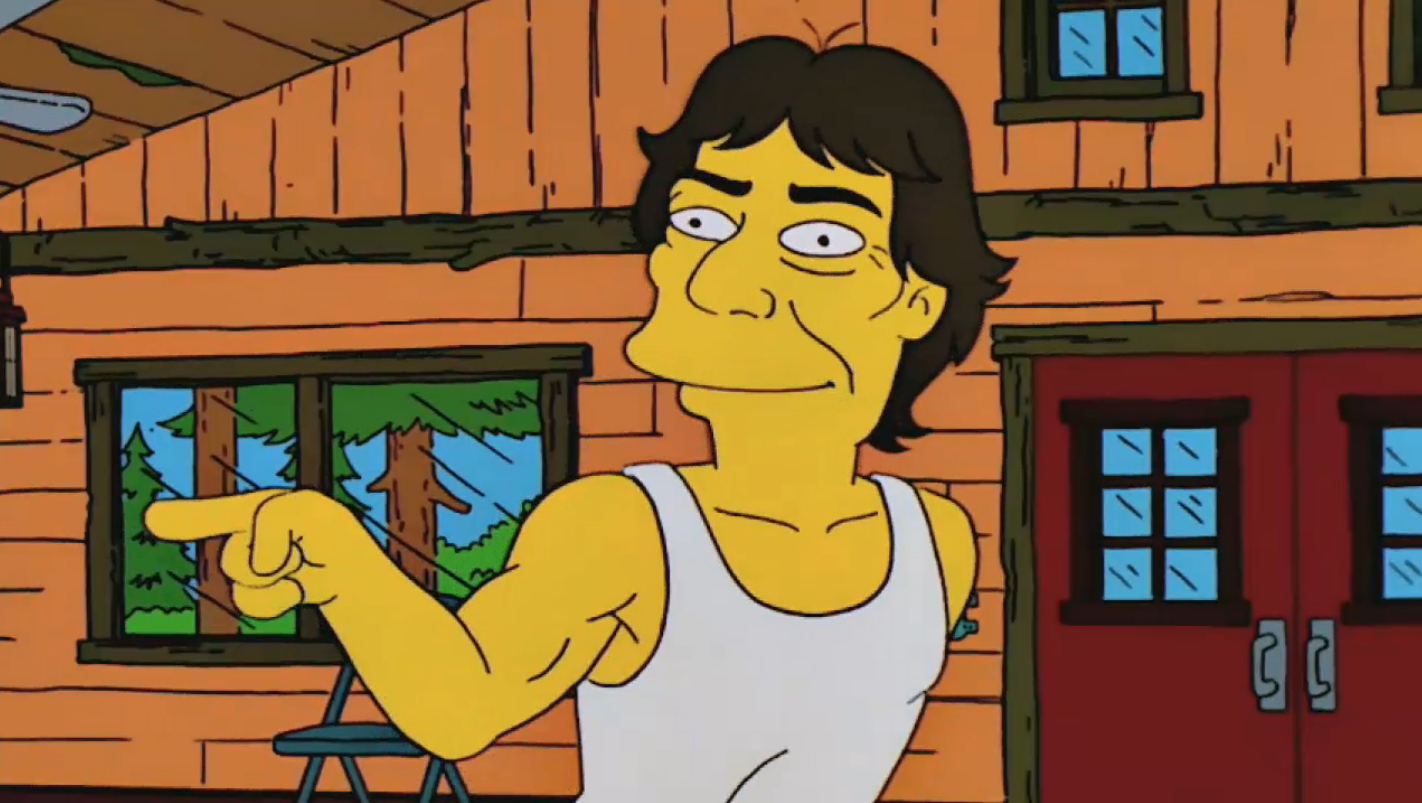 Marge spent the fam’s vacation money on Rock & Roll Fantasy Camp for Homer, who got to learn how to be a rock star from the best. Lenny Kravitz taught style, Elvis Costello handed out instruments, Tom Petty instructed the campers in lyric writing, and Rolling Stones frontman Mick Jagger taught his trademark moves.

“How I Spent My Strummer Vacation” was a superstar-packed delight across every minute—especially when the rockers got mad that Homer was stealing their spotlight after he turned a concert they were set to play into his musical moment. It’s hard to forget the hilarity of animated Mick, Keith, and the rest of the gang chasing after the power plant worker while riding their massive devil face/fire-shooting stage car. 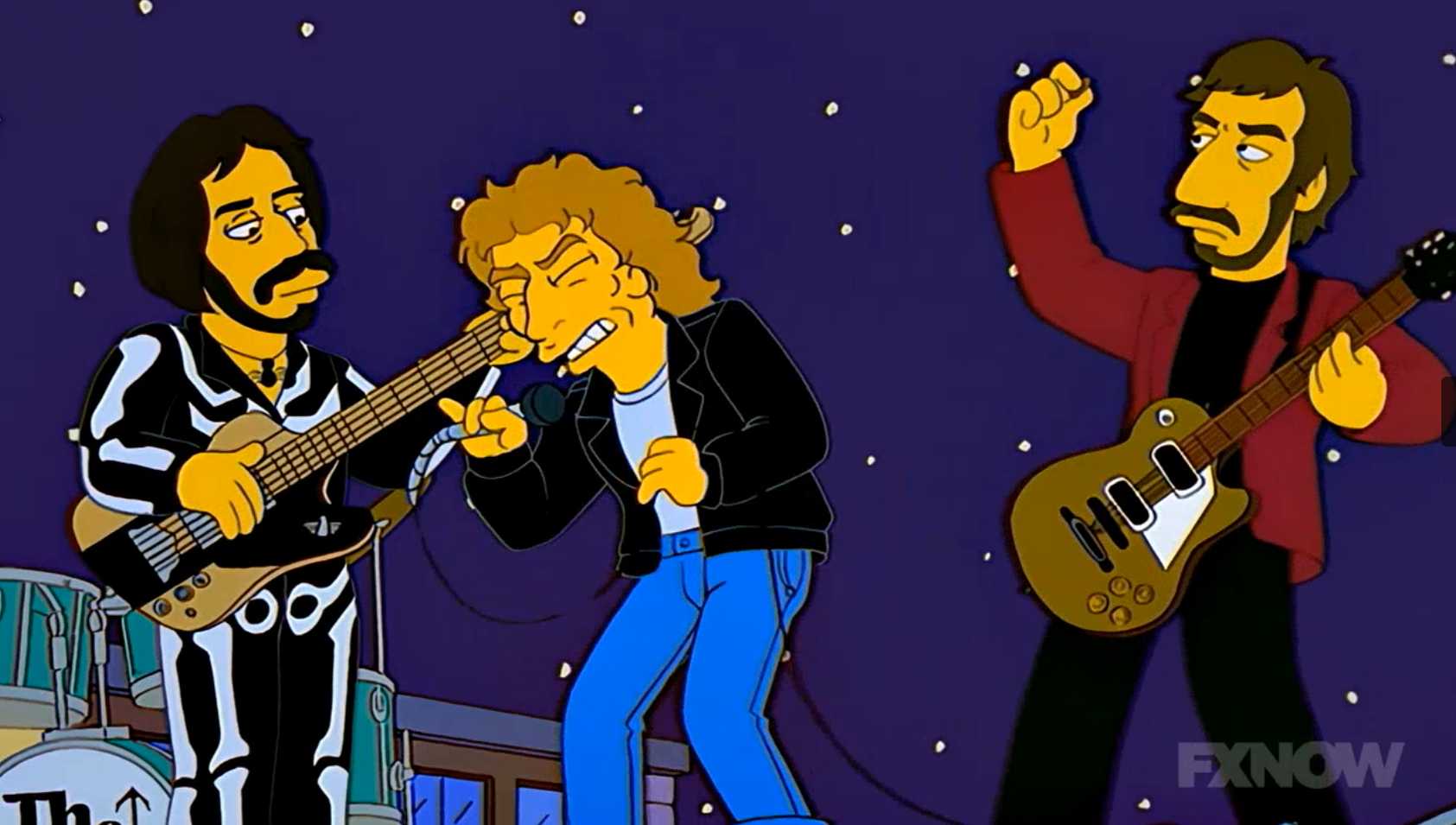 Rock ‘n’ roll reunited Springfield, which had been split in half in this episode after a new area code was introduced. The Who brought an epic stadium-rock feel to their performance, which hilariously was atop a wall of trash that divided the town. Pete Townshend heroically knocked it down in a trademark move by the axeman, who cranked up his amp and laid down full-volume guitar licks on “Won’t Get Fooled Again.”

Watch: Homer convinces The Who to play New Springfield 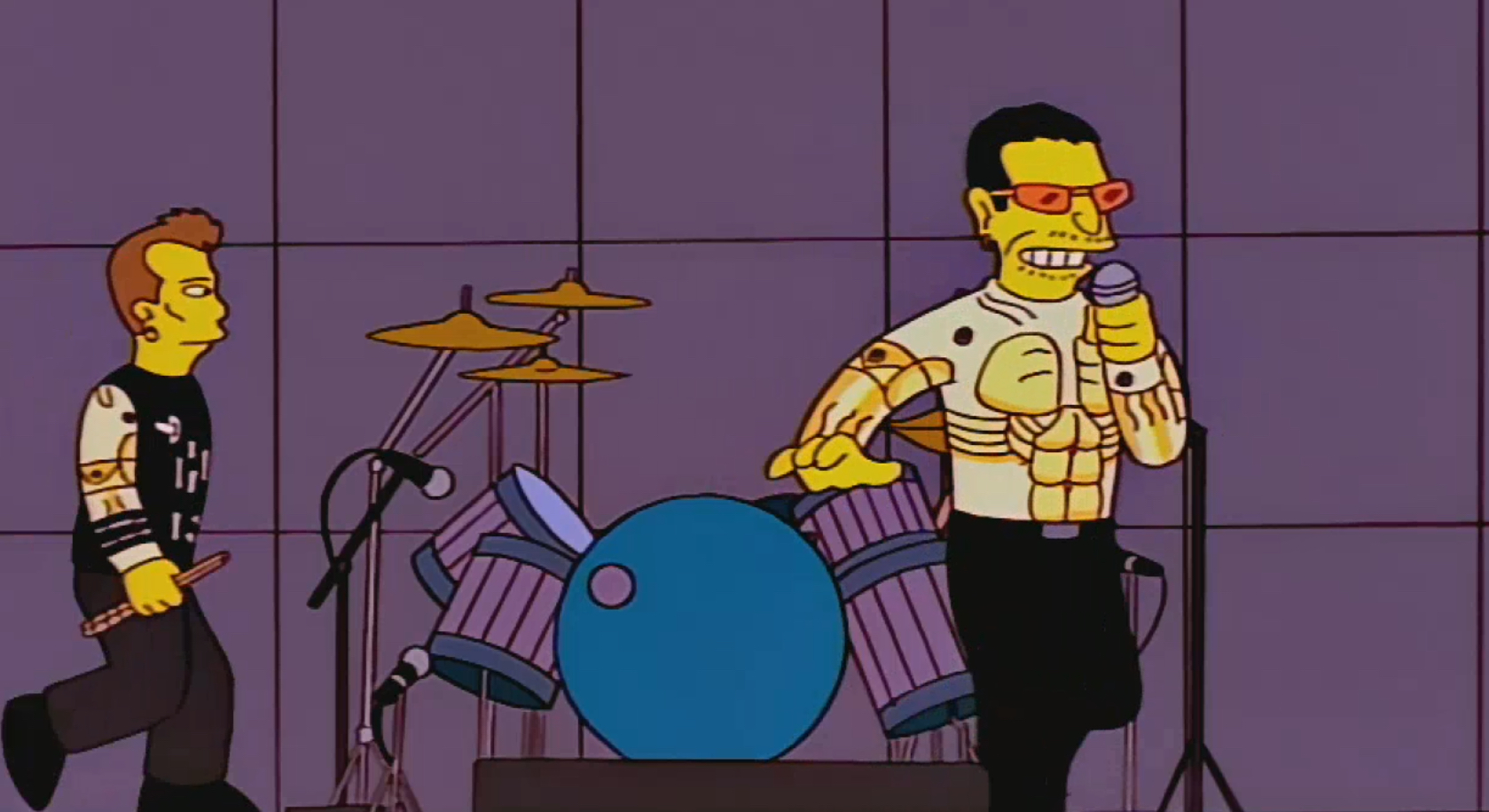 U2’s PopMart Tour really went everywhere in the late ‘90s—including to Springfield. The Irish outfit were in the middle of “Pride (In the Name of Love),” when they had a stage crasher in the form of one Homer Simpson, who was running for Sanitation Commissioner. Noting waste management was an important issue, Bono let Homer have his say while The Edge, Adam Clayton, and Larry Mullen Jr. skipped off to Moe’s for a pint.

“Trash of the Titans” was one wild episode thanks to U2’s appearance. The group even joined in on an original number—“The Garbageman,” a song that was part of semi-fantasy sequence about Springfield rubbish cleanup.

Watch: Homer crashes the U2 concert 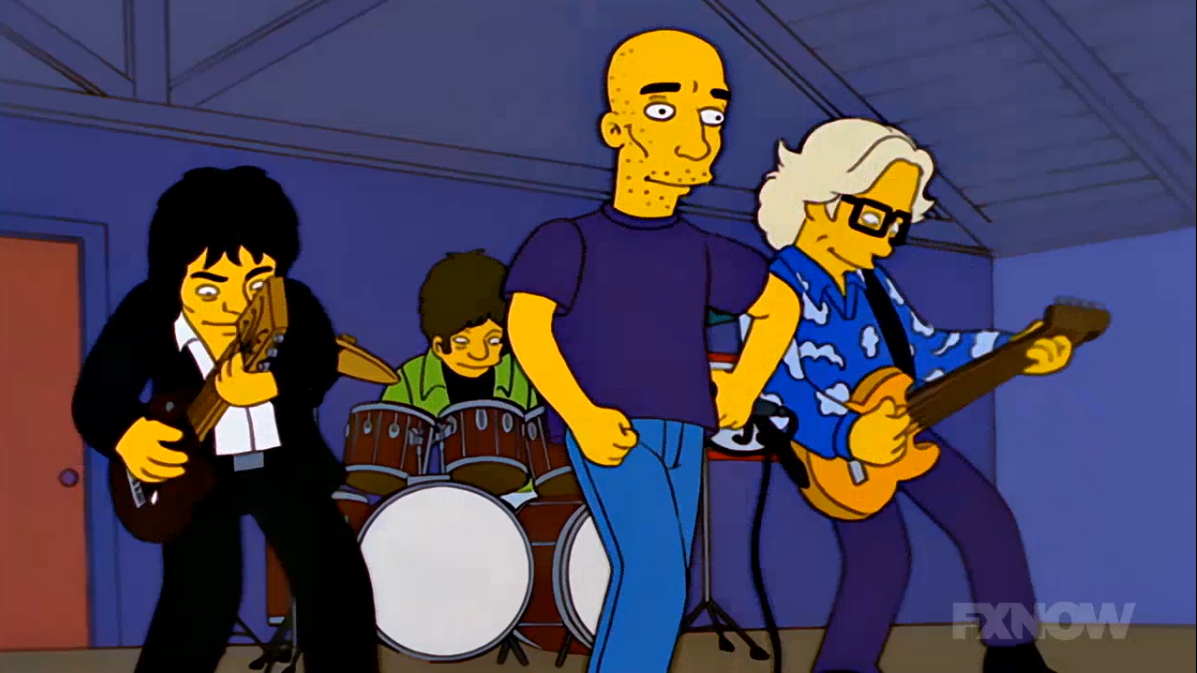 R.E.M. rocked out in a garage! The Georgia outfit were duped into playing Homer’s home bar after being led to believe the Simpson dad and his pals were millionaires staging a benefit to save the rainforest. They played “It’s the End of the World as We Know It” to an audience of three who lapped up every second. Who wouldn’t have wanted to be at such an intimate show? (Without tricking Michael Stipe, though.) 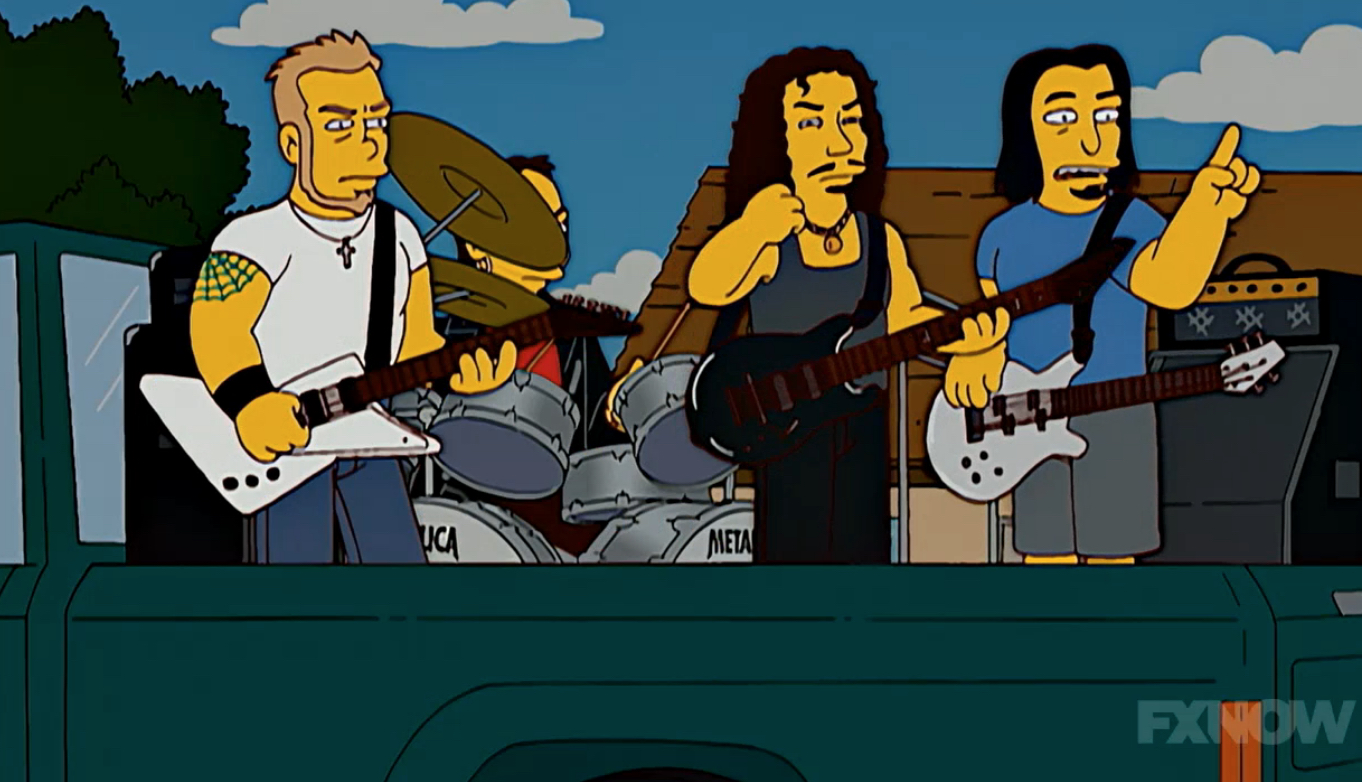 Metallica made Springfield elementary school bus driver and metalhead Otto’s day in this episode, which introduced them standing on the side of the road after their tour bus broke down. Best moments from their appearance? When Lars Ulrich and Kirk Hammett shared memories of seeing the long-haired Springfieldian at their ‘97 show. “I was about to quit the band, when I saw your lighter. You saved me that night,” Hammett recalled.

Sadly for Otto, he didn’t make pals with Kirk and Lars that day. The band, who needed a ride, hopped in the back of Hans Moleman’s pickup, where they played the intro to “Master of Puppets” as they rode off. 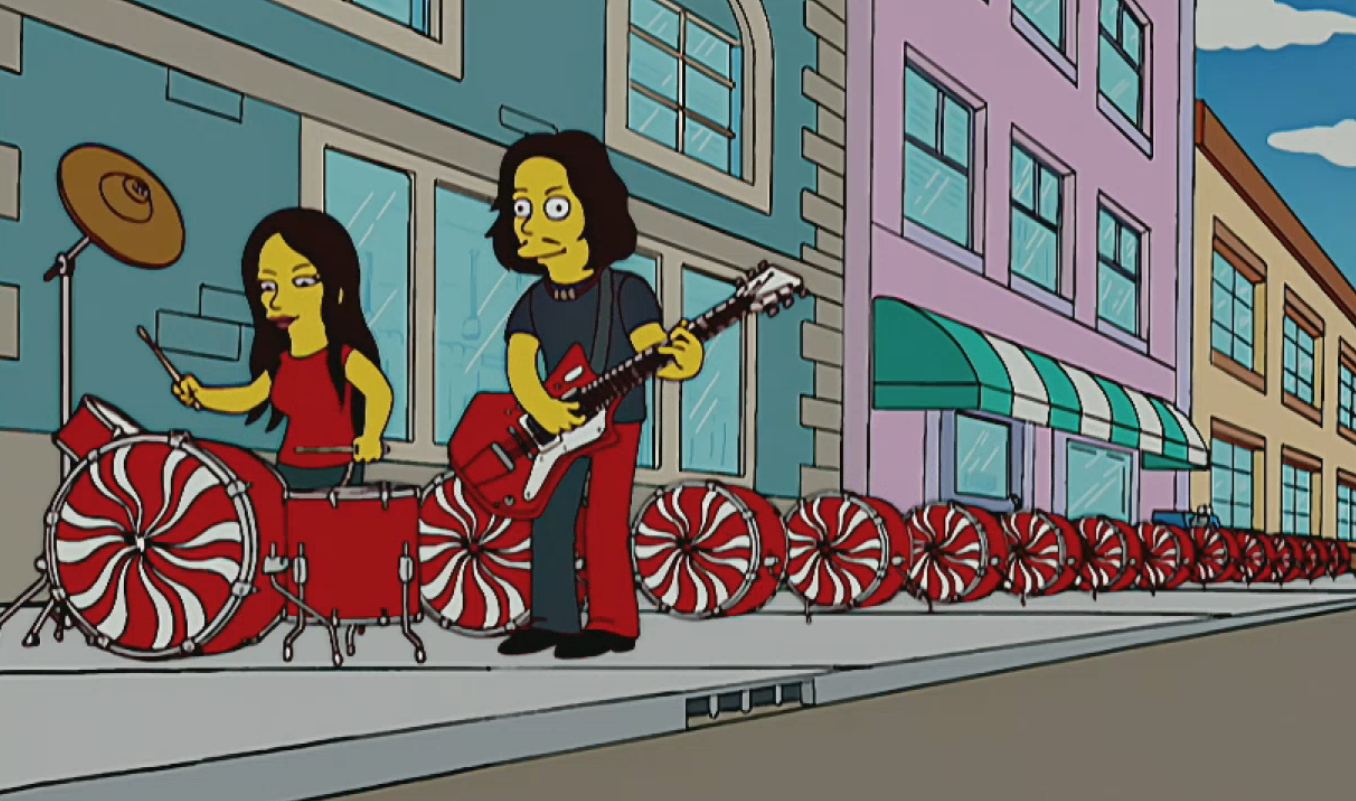 It’s said that imitation in the sincerest form of flattery, and The Simpsons did it to The White Stripes by mimicking their “The Hardest Button to Button” music video. The show took inspiration from the super-stylized music vid and turned it into a beat-driven chase between Bart—on his new drum kit—and Meg and Jack White. The Detroit garage rockers’ timing sadly dropped them from the opening of a bridge and onto a floating garbage barge, ending their brief but fun cameo.

Watch: The White Stripes and Bart drum through Springfield 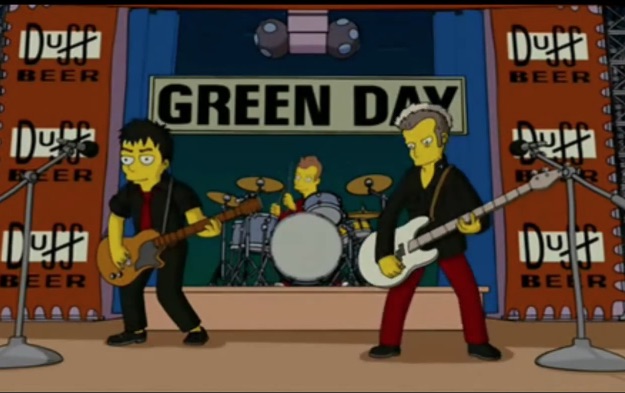 Who could forget Green Day‘s appearance at the Duff Beer-sponsored Summer Concert in The Simpsons Movie? Billie Joe Armstrong, Tré Cool, and Mike Dirnt churned out a truly awesome guitar-driven rendition of the show’s theme song! Unfortunately, their decision to bring up environmental issues during their set didn’t sit well with the crowd (although Lisa was on board). The group were pelted with rubbish that sank their floating stage. 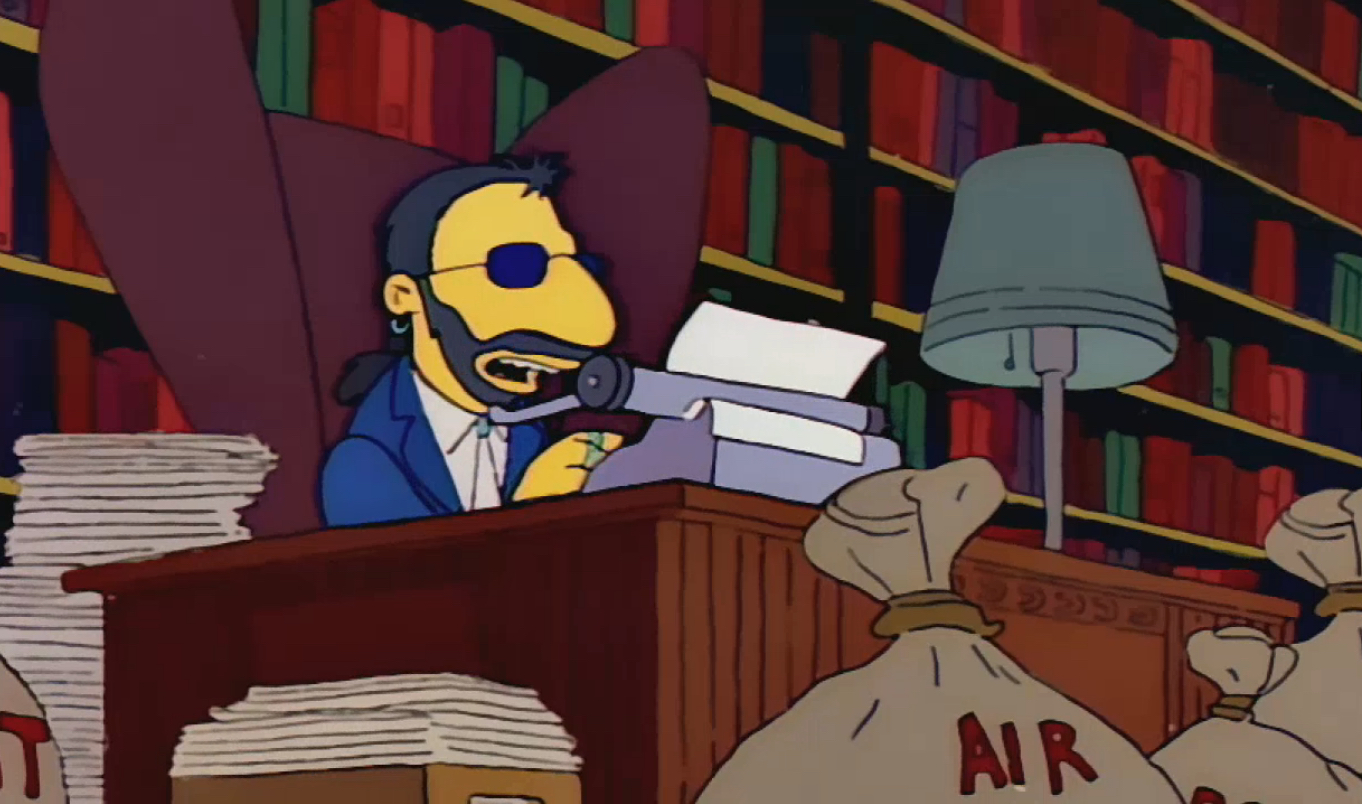 Ringo Starr was the first of The Beatles to appear on The Simpsons (Paul McCartney and George Harrison also made cameos), cropping up way back in Season 2 in an utterly delightful animated cameo. With a little time on his hands, a Simpson-ized Ringo decided to answer some decades-old fan mail—including a letter from a young Marge Bouvier, who sent him one of many portraits she painted of him long before she became a Simpson.

Which rock star’s guest appearance on The Simpsons was your favorite? Tell us on our Facebook page.