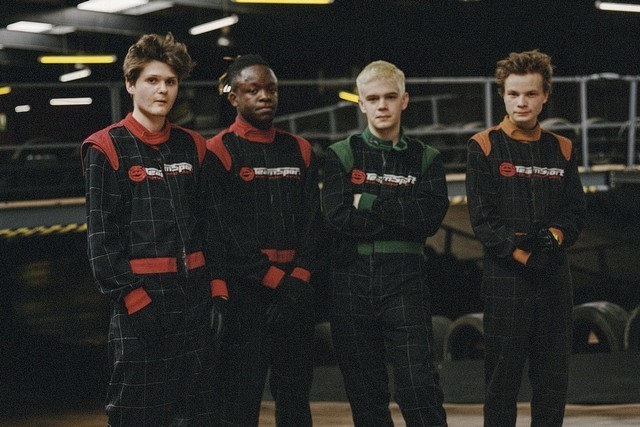 CREDIT:Dan Kendall/ Courtesy of The Artist

Black Midi, as is their wont, have devised a shadowy and perhaps more-complicated-than-necessary way of sharing a bit of new music with the public. For whatever reason, the young and insanely talented U.K. post-punk band uploaded a full album-length stream of their debut LP Schlagenheim to YouTube today, about two and a half months after it was originally released. And as Stereogum points out, the YouTube upload contains a previously unreleased song nestled at the end, CD bonus track-style. The song, which Black Midi has performed live before, doesn’t have an official title as far as I can tell, but fans have taken to calling it “Cameron’s Song,” because bassist Cameron Picton takes the lead vocal.

The music is somewhere between the surreal sun-baked post-rock of Slint, the slo-mo clean guitar interplay of latter-day Earth, and the spaced-out Americana of Daniel Lanois. Picton delivers a monologue in a blatantly artificial Texas accent that can’t always conceal the London underneath. He lingers on archetypal American imagery that never comes together the way it should, like when the narrator asks the person behind the counter at 7-Eleven “to do me an omelet” as if it’s a roadside diner. Whether intentionally or not, the not-quite-right-ness of it all lends the song a creepy uncanny feeling, a vision of desert highways and lonesome ramblers straight out of David Lynch’s Wild at Heart.

You can hear the song at about 43:10 in the YouTube embed below, and read our interview with Black Midi here.