This article originally appeared in the January 2006 issue of SPIN. In honor of the 15th anniversary of the band’s debut album Funeral, we’re republishing it here.

Nine members of Arcade Fire emerge from a spotless black limousine onto the sidewalk by the side entrance of the Ed Sullivan Theater, dressed jeans and T-shirts, instead of the fancy jackets, ties, and gowns they wear onstage.

It’s as weird as spying Jack White in a periwinkle jogging suit, but if the Canadian indie rockers are attempting to decoy potential stalkers as they prepare to tape the Late Show With David Letterman, it doesn’t work. Giddy, camera-wielding fans have no problem identifying the year’s fastest-growing alt phenomenon. Face-to-face with admirers who appear to range in age from 15 to 45, the band’s expressions reveal bemusement paired with bafflement, registering yet another side effect of what’s beginning to feel like fame.

Moments later, the Montreal collective, which can vary from five to nine members, is literally cut down to size, crammed into two microscopic dressing rooms to munch cookies and change clothes before performing their propulsive anthem “Rebellion (Lies),” becoming only the second act on their small North Carolina label, Merge, to her appear on Letterman (the first was Spoon).

Exactly one year prior to this September afternoon, Arcade Fire’s debut, Funeral, was released. It has sold 219,000 copies. In two days, they’ll perform a moonlit concert in Central Park to 5,000 people, with special guest David Bowie. Last year at this time they played rooms that maxed out at 200.

“It’s really been one foot front of the other, trying to be aware of what’s going on,” ays Win Butler, 25, the band’s hulking, sad-eyed lead singer and co-songwriter. “It’s so important for our music to be totally present. If we are burned out when we are playing, there’s no reason to be there.” 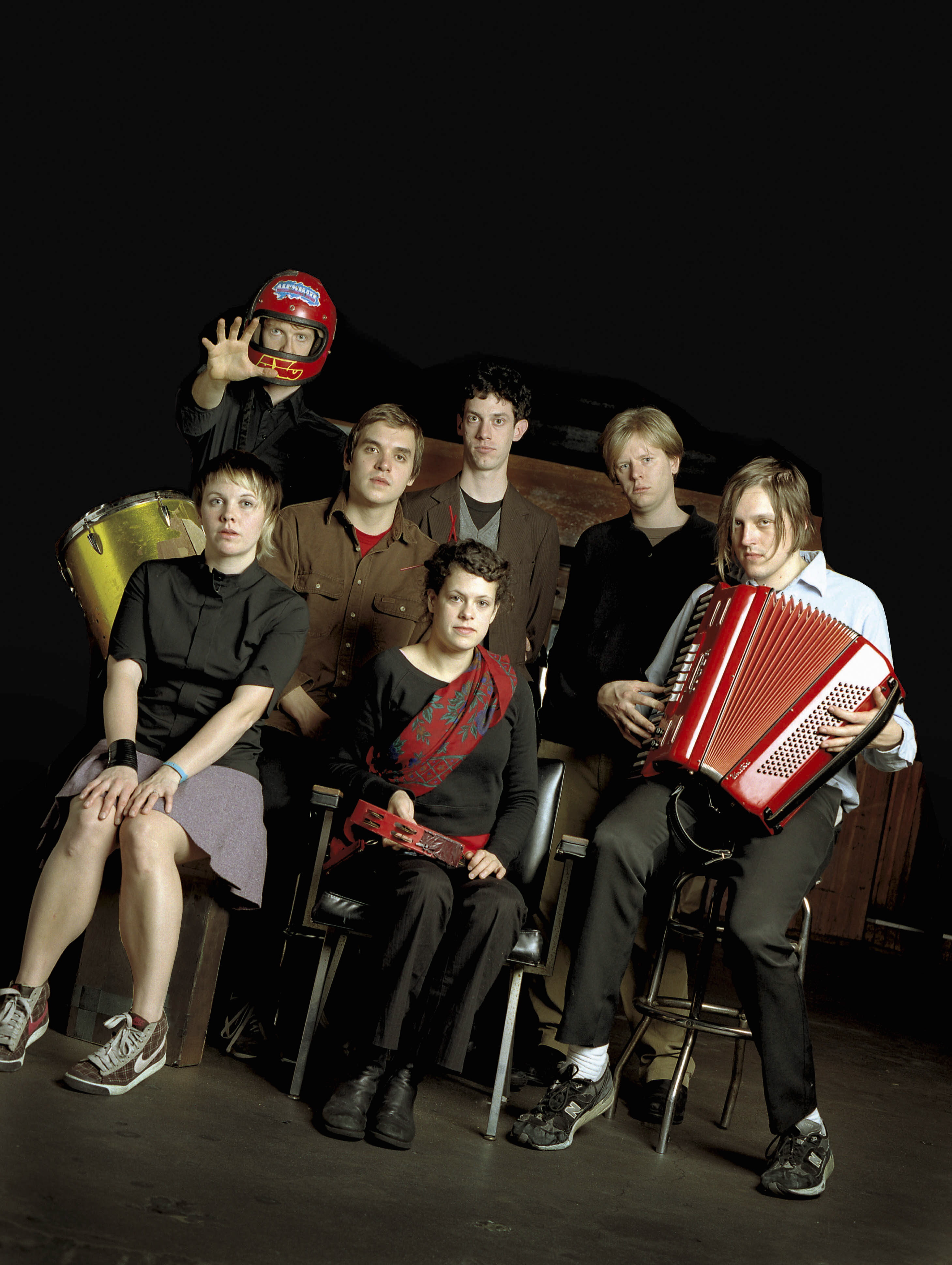 There have been many demands for Arcade Fire to be present this year—at megafests (Coachella, Lollapalooza, among others), special events (backing Bowie at CBS’s Fashion Rocks concert; accompanying David Byrne at the Hollywood Bowl), and on tours that criss-crossed North America and Europe.

But Butler is mainly referring to the intense emotional investment crowds expect from the band’s gorgeously chaotic performances, considered letdowns if anything less than transcendent: As they blast out epic orchestral rock dressed in their Sunday best, Butler’s disheveled younger brother, Will, engages in playful combat with geeked-out guitarist/keyboardist Richard Reed Parry while having his way with marching drums, bells, and one very dimpled cymbal. The group’s curly-haired co-leader, Régine Chassagne, twists herself into stiff robot poses at the microphone or manically bashes her keyboards.

Everyone shrieks lyrics like “Is it a dream, is it a lie? / I think I’ll let you decide” as though they’re gasping for their final breaths. And largely thanks to these You had to be there gigs, critics, bloggers, fellow bands, and rock legends have been guzzling Arcade Fire Kool-Aid.

“I think we’re doing something that stands out a bit from the rock acts,” says Parry backstage at Letterman before initiating a debate about the best way to keep his glasses affixed to his head during the appearance.

“They put on one of the best shows I’ve seen in a long time,” says Yeah Yeah Yeahs guitarist Nick Zinner, who took in the band’s Coachella set in May (and adds that Arcade Fire’s cover of his band’s “Maps” is “one of the best I’ve heard—very sincere”).

“I guess I’ve come to demand a certain intensity from a performance after seeing so many bands. One of the dudes was climbing a tower and banging on things, and he cut himself. Blood is always a good sign of honesty.”

Though Butler appreciated the praise his group’s theatrical antics have generated, he winces at the though that that’s how they’ve made their name. “It’s not like Richard’s going to be 65 years old banging on Will’s helmet with a drumstick,” he says. “The live show is very much about this record, this particular point in time, and whenever we’re onstage. It’s going to have to change, depending on where we’re at.”

No one in the band seems about to lose his or her bearings; Butler holds the center as the brooding, thoughtful eye of the Arcade Fire storm. Born Edwin Farnham Butler III, the 6’5″ frontman is the grandson of big-band leader/pedal steel guitar virtuosos Alvino Rey and grew up in a Houston suburb before attending the elite Phillip Exeter boarding school in New England, where he started to take music more seriously. (“I played in a cover band there,” he says. “We did ‘Just Like Heaven’ for an assembly once.”)

After a few forgettable semesters of classes at New York’s Sarah Lawrence College that were spent screwing around with a four-track recorder, he found a songwriting partner in a high school friend’s buddy, Josh Deu, and the two moved to Montreal and began to focus. Funeral‘s epic opener, “Neighborhood #1 (Tunnels),” was an early composition. “There was a Beethoven song that we thought was really interesting, that we kind of based the melody on. It’s in Clockwork Orange,” Butler says.

In 1999 the aspiring singer met Chassagne, 29, a daughter of Haitian refugees who attended an all-girls Catholic high school and has performed jazz and medieval music. “I was really happy about the uniforms because you don’t have to deal with how you look,” she says of her teen years. “I could actually concentrate on learning things.” 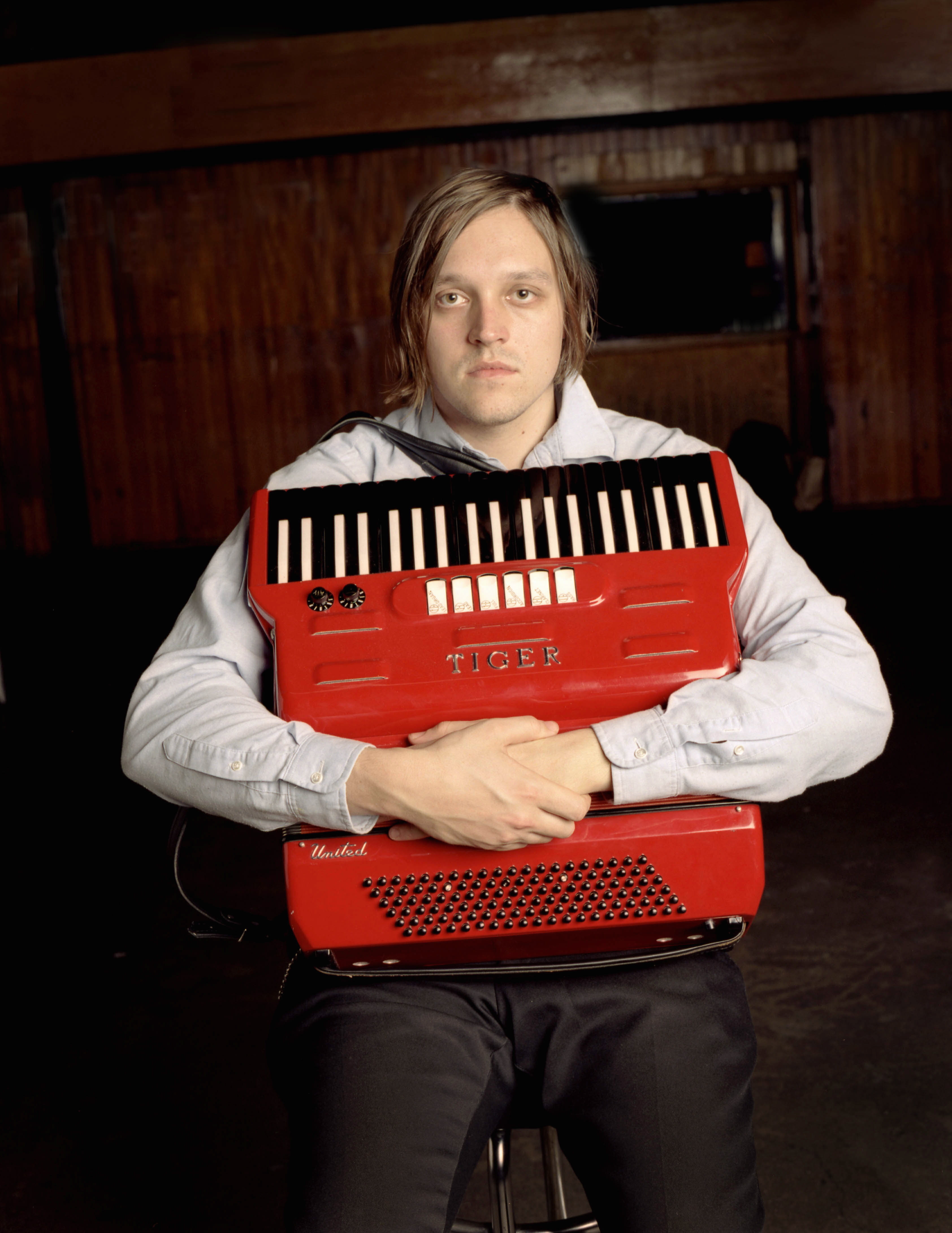 With her eccentric collection of inherited albums, Chassagne proved a perfect foil for Radiohead-fan Butler. The two began dating and assembled the first incarnation of Arcade Fire in 2000. The band didn’t last, but their relationship did (the two were married the morning after the North American blackout in August 2003).

A second version of the group fell apart after recording a demo, but as Northwestern University poetry student Will Butler and local musicians Parry and bassist/guitarist Tim Kingsbury found their way into the fold, Arcade Fire’s sound—and their stage show—became bolder.

“Will and Richard started interacting,” Butler says. “It was a lot more confrontational with the audience because we felt like people in Montreal were expecting certain music from us, and we were like, ‘Fuck that, we want to play louder music right now.'” In September 2003 they started to record their first full-length album. By the time they had finished, the band members, reeling from the deaths of relatives, christened the project Funeral.

With layers of accordion, pounding piano, strings, xylophone, percussion, and Butler’s alternately grand warbling and clipped vocals, Funeral is many things—an ecstatic frenzy, an expedition into the depths of the heart, a drama-rock opus. Lyrically, Butler and Chassagne conjure fear, heartbreak, maturation, deception, and hopefulness.

A handful of Funeral‘s ten tracks follow a loose narrative about a snow-covered district taken over by children during a power outage that’s both idealistically romantic and despairingly bleak, inspired by an actual 1998 Montreal blackout.

“There was an ice storm, and the power lines were all crooked. It was so crazy and I got lost in my own city,” Chassagne says while lunching with Butler. “I read in the news all the farmers and people in the country bought truckloads of wood to the city to burn fires, and that really touched me that people would go out—”

Butler interrupts Chassagne’s moment of utopian optimism by rubbing two fingers together, indicating the universal sign for cash. “They were selling the wood,” he says, and laughs.

“What are you talking about? You ruined my whole thing! Now I’m depressed!” Chassagne says with a sigh.

In 2005 it wasn’t a bad idea to promote music that isn’t afraid to get weepy. Funeral seemed to resonate as Americans grappled with war, hurricanes, and a general sense of anxiety. Rather than laugh off their cares, people were drawn to art that captured futility and discomfort. With their sophisticated emotional palette, Arcade Fire paint in broad strokes, updating teenage angst for the yuppie-goth Six Feet Under era. Funeral provided a $12.99 therapy session for anyone who wanted to blurt out their fears and dreams to some of the catchiest riffs and most beautiful melodies in years.

“I like that they make very passionate and empathetic music without it being too precious,” Zinner says. “I get emotionally affected by their music, but it’s never in a ‘woe is me’ kind of way. I find their music really empowering.” 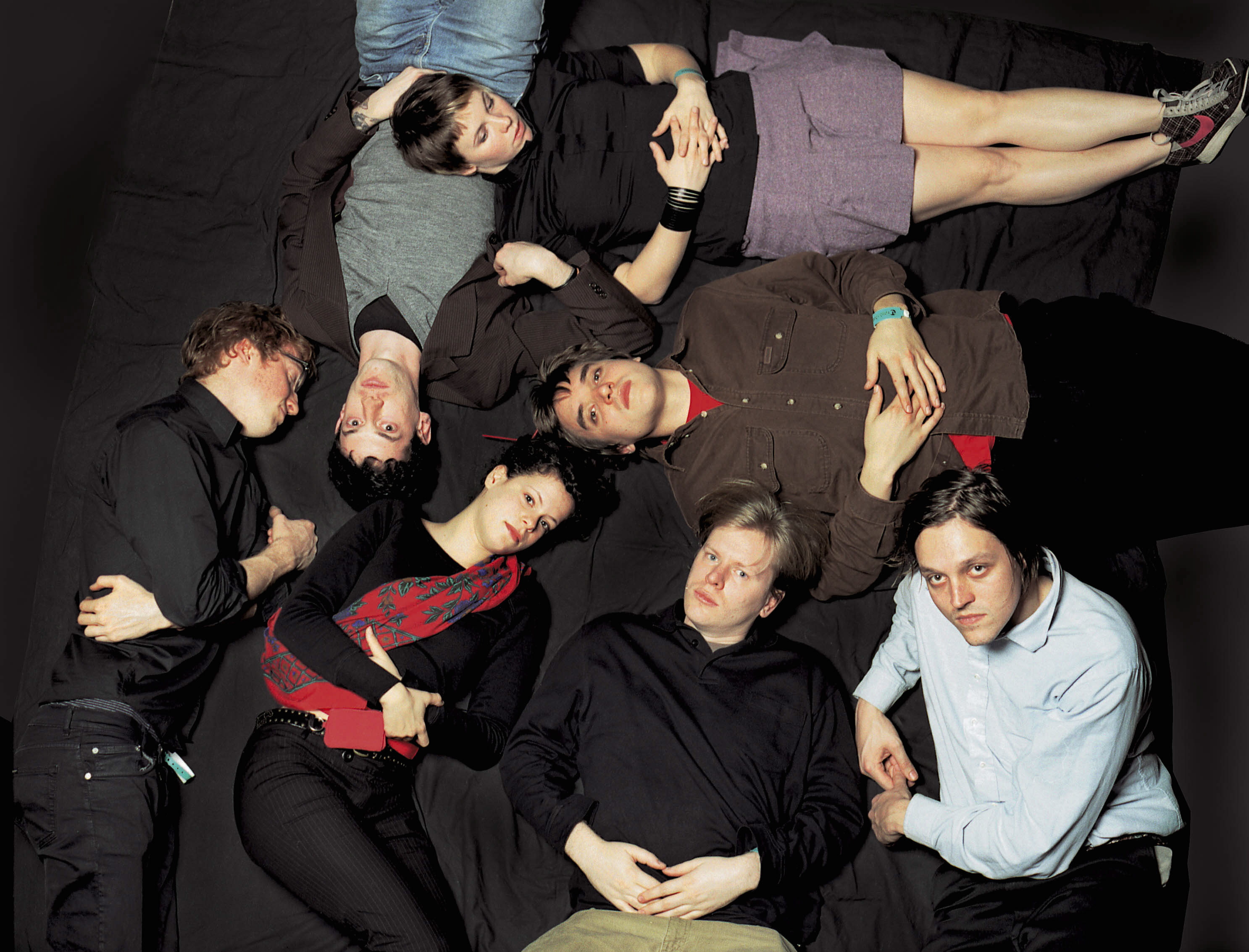 And then there are the three big B’s: Bowie, Byrne, and Bono. Bowie and Byrne came to New York City shows, the former Talking Heads frontman joining the band onstage for a rendition of “This Must Be the Place (Naïve Melody),” then championing them on his blog. Bowie wanted Arcade Fire to appear at Fashion Rocks, then showed up at the Central Park show in a white suit with a guitar in hand. “They’re great writers and a good live band. What more do you need?” he said enthusiastically before hopping onstage to play his own “Queen Bitch” and Arcade Fire’s rapturous call to arms, “Wake Up.”

U2 have been blaring “Wake Up” through areana sound systems right before taking the stage on their Vertigo tour and asked for the band’s permission to use the track on a DVD chronicling the journey. Before they agreed, Butler and Co. had a few requests. “We’re playing three shows, and the day off is Thanksgiving, so we’re going to have them come over for Thanksgiving dinner if they’re not too busy,” Butler says with a grin. “Them and Nelson Mandela can come over.”

Arcade Fire’s rotating cast of players take great pains to emphasize that being surrounded by thunderous buzz hasn’t left their ears ringing (Parry and Kingsbury both said that their Letterman limo ride was their first). “It’s easier said than done to be like, ‘Ah, we don’t care.’ But we’re going to do our damnedest,” says Parry. “You start Googling your band name and it’s like, ‘Ooh, that’s a lot of hits!’ It’ll just make you crazy. People can tell you your band’s doing really well, but only your heart can gauge whether you’re succeeding in your goals.”

Violinist Sarah Neufeld adds, “It has happened fast, but it’s happened in small increments, so it’s felt natural. It’s kind of ridiculous, like, we’re doing this thing with Bowie at the fashion event and there’s Beyoncé right there. But the progression seemed logical enough.”

They’ll soon be recording their next album in a suburban Montreal church. And at Northern California’s Download Festival in early October, they conclude the final leg of their yearlong Funeral tour. Before their set, Parry and Butler played a friendly Ping-Pong match, and Chassagne did a few push-ups.

Once onstage, Butler stood anchored in the center, fiercely strumming his guitar as the group’s humongous wall of sound collided with the crowd’s delighted roar. After the final refrain of “Rebellion (Lies),” he grabbed his microphone stand and hurled it at two startled observers in the photo pit, then stalked offstage, finally free.

“Some nights you’re kind of threatening the audience in a sense. You want peoples’ hearts to beat a little faster,” Butler had said one month earlier. “There’s nothing wrong with being scared for a second or not knowing what’s going on.”