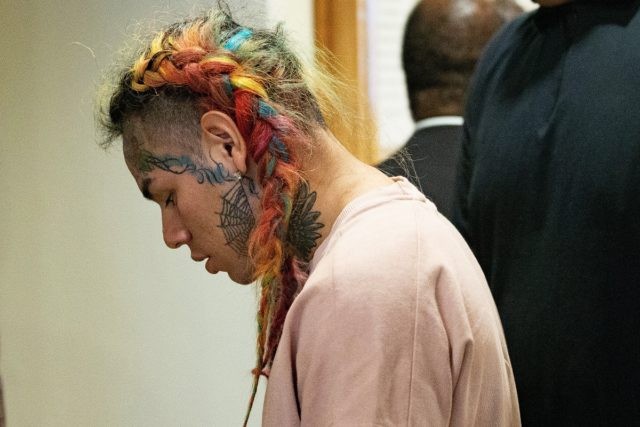 Last year, less than a month after narrowly avoiding being required to register as a sex offender, the rapper and controversy magnet Tekashi 6ix9ine (born Daniel Hernandez) found himself in legal trouble all over again. Arrested on firearm and racketeering charges and facing a possible life sentence, 6ix9ine pled guilty to nine charges this past winter and agreed to cooperate with the feds. And my, has he been cooperating.

Taking the stand Tuesday as a witness against two leading members of his former gang, 6ix9ine identified fellow Soundcloud-rap star and former label-mate Trippie Redd as a member of the Five Nine Brims Bloods. As Vibe points out, on Wednesday he admitted to ordering the widely reported shooting targeting Chief Keef in June of 2018. And today, as Page Six reports, he continued to officially out various rappers as gang members.

Specifically, he identified Cardi B and Jim Jones as members of the Nine Trey Gangsta Bloods, the set 6ix9ine himself was affiliated with before flipping. “I knew who she was. I didn’t pay attention,” he supposedly said of Cardi, who has said in interviews that she used to be a Blood. Whether 6ix9ine’s testimony leads to any further legal trouble for her remains to be seen.

It also remains to be seen what becomes of 6ix9ine, who is now maybe the most famous snitch in the world and is presumably wanted dead by a wide swath of gang members. As The Ringer’s Rodger Sherman points out, it seems like getting him into witness protection may present some difficulties.