The process of choosing something to watch on a lazy night in can be nerve-racking and drag on way longer than it should. This is What We’re Watching, the place where SPIN staffers discuss some of the more compelling (or at least, intriguing) programming they’ve watched on a major streaming service over the course of the previous month. We try to focus on movies and TV shows that aren’t already dominating the cultural conversation, and older entries are welcomed along with newer ones. This month, we break down a couple of notable ’90s thrillers from Barbet Schroeder and Quentin Tarantino, some marginal Netflix-core B horror, an Ingmar Bergman classic, and a video about ham.

If I were putting together a time capsule devoted to weirdly hostile fictional depictions of women in the late ‘80s and early ’90s, Barbet Schroeder’s 1992 film Single White Female would be a logical inclusion. According to thrillers of that era—think Fatal Attraction or The Hand that Rocks the Cradle—there was nothing more dangerous than an unmarried woman. At any moment, unsupervised and feeling scorned, she might completely snap, boil a bunny, and start stabbing anyone who rejected her.

The unhinged woman at the center of Single White Female is Hedy, played by the magnificent Jennifer Jason Lee. Likely suffering from personality disorder, Hedy becomes obsessed with her new roommate Allie (Bridget Fonda), a self-employed career woman living in an absurdly palatial Upper West Side apartment. Allie seeks out a roommate to help with the rent after a breakup with her philandering fiance Sam (Steven Weber). The movie seems to serve as a cautionary tale for independent women who forgo a life with a man at home to protect them, echoing the aversion to feminism and bodily autonomy of the Reagan/Bush years. Sure, Sam cheated on Allie, but had she worked things out, rather than kicking him out of their home, then Hedy would have never tried to slowly assume her identity, murder Sam after an ill-fated blowjob, and attempted to goad Allie into killing herself. In the Single White Female cinematic universe, Allie has no one to blame but herself. 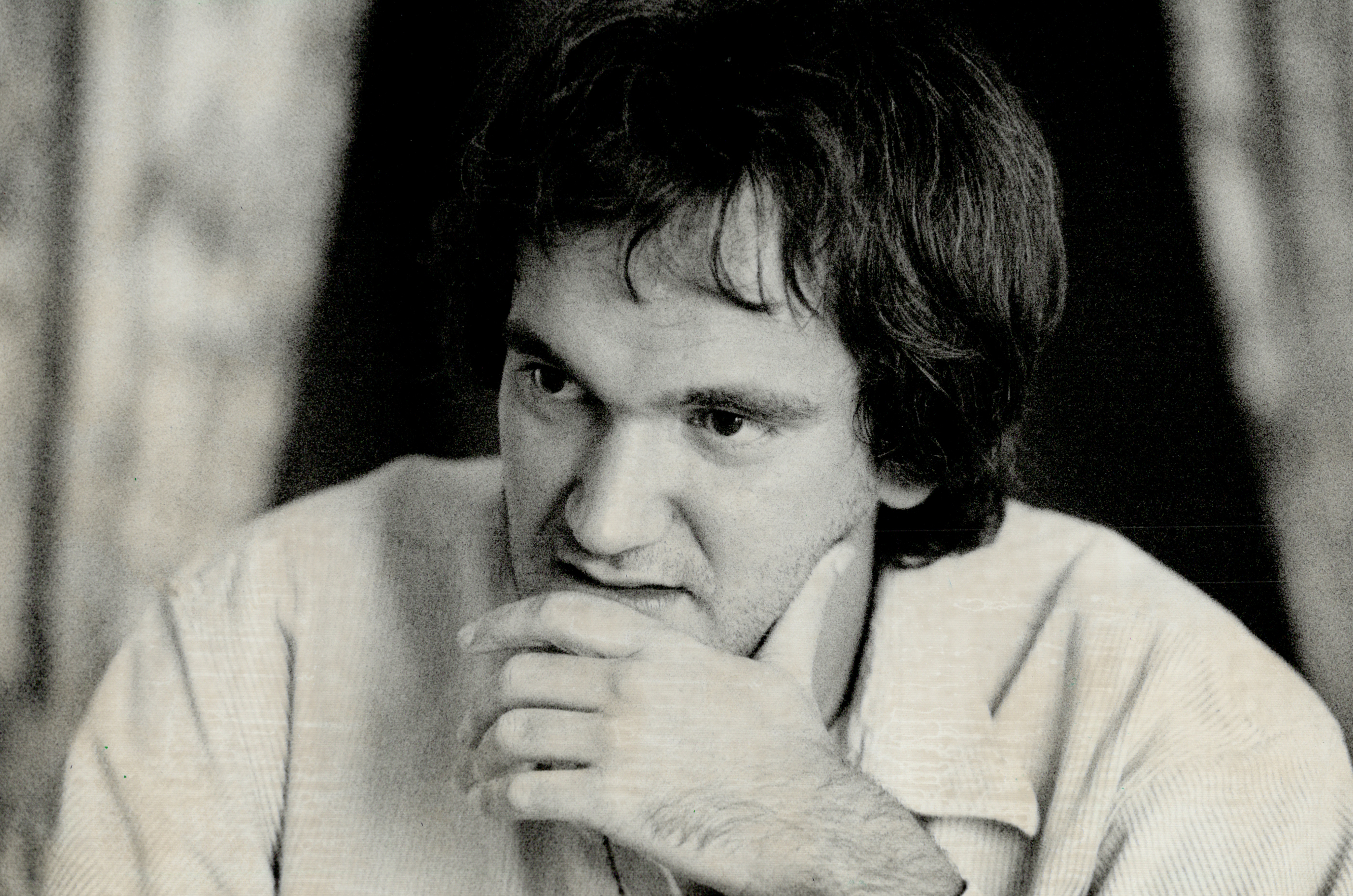 The movie is oddly transfixing despite its fucked-up politics, mainly because of Fonda and Leigh’s incredible performances. There are also plenty of standalone bizarre moments which make it worth revisiting. At one point, Allie tries to alert neighbors that she’s being held hostage by her psycho roommate by turning up the volume of a Front 242 video hoping it will prompt a noise complaint. Then-sitcom star Weber was apparently angling for edgier roles, as evidenced by his apparent willingness to go full frontal before taking a stiletto heel to the temple. -MAGGIE SEROTA

The recent release of Quentin Tarantino’s Once Upon A Time In… Hollywood provides a good opportunity to revisit the controversial writer and director’s underrated 1997 thriller Jackie Brown. Once Upon a Time resembles Brown more than anything else in Tarantino’s filmography: both movies are sentimental and leisurely paced, and their plots play out linearly instead of jumping around in time. The film, which stars Pam Grier in the titular role, was dinged for at the time by critics and audiences who expected something more provocative and convoluted, in the vein of Reservoir Dogs and Pulp Fiction.

For me, though, Jackie Brown is Tarantino’s best work, because it focuses more on developing entertaining characters than furthering an action-packed plot. Brown is based on hardboiled crime writer Elmore Leonard’s 1992 novel Rum Punch, and Tarantino’s screenplay emulates Leonard’s playful approach to character development. Both writers understand that the best part of a detective story is not the case itself but the people who are involved. In Jackie Brown, Tarantino’s charismatic cast includes Samuel L. Jackson’s petty condo gangster with slicked-back hair, Robert DeNiro playing a grunting ex-con who is past his prime, and Robert Forster as an unflappable bail bondsman who is obsessed with Jackie Brown.

Most importantly, though, there is Grier, who gives a perfect and winning performance as Jackie. On my latest rewatch, I responded to her more than ever before: a struggling middle-aged Black woman in a society that has essentially decided she has no real use. All Jackie is looking for is 100 grand to start a new life. For her, something so minuscule in the grand scheme of things, yet completely out of reach for most Americans, makes all the difference in the world.

Movies starring middle-aged Black women continue to be rarities in Hollywood. At the time, Jackie Brown felt particularly revolutionary because it was coming from the hottest director in the business. Tarantino’s movie is a love letter to Pam Grier, and more Black female actresses deserve adoring tributes like it. —ISRAEL DARAMOLA

It’s easy to feel that, if you subscribe to three or four of the major video streaming services, you have access to every piece of worthwhile film and television ever made. It is the precise ideology that Amazon, Netflix, and the whole gang want you to buy into, allowing them to continue to foreground their own original programming while Kondoing their archives. If you’re interested in seeking out rare and classic films that aren’t being automatically served up to you, there are plenty you’ll be hard-pressed to find, even if you’re willing to pay for an Amazon rental.

This past week, I was struggling to find quick access to a movie that many consider to be among the greatest ever made: Ingmar Bergman’s 1982 family drama Fanny and Alexander. As with a decent chunk of the influential Swedish director’s catalog, I discovered that the only way to watch the movie digitally is on The Criterion Channel, the current home of the influential distribution company’s high-quality transfers of classic, cult, foreign, and avant-garde films. The defunct Filmstruck service, which formerly housed the collection, had a much faultier streaming mechanism, so allow this blurb to also function as a whole-hearted recommendation of the sleek new Criterion interface.

Intended as his swan song before retirement, the early-20th-century period piece Fanny and Alexander is Bergman’s most ambitious project. Originally cut into four parts to be a TV miniseries, and also released in an abridged, three-hour-plus theatrical version, it is an epic detailing the lives of members of the affluent but troubled Ekdahl family, who operate a theater in the town of Uppsala. In some of the movie’s most haunting moments, Bergman aligns our view of the family dysfunction with the family’s youngest children (the namesakes of the film). Refusing to shy away from sexuality and violence, the movie makes us feel like we are watching traumatic memories being implanted.

I was inspired to take on all 312 minutes of Fanny and Alexander after watching and reading interviews with Ari Aster, the director of Hereditary and this year’s staggering Midsommar. In numerous interviews, Aster has discussed Bergman’s influence on his own devastating portrayals of troubled families and deteriorating romantic relationships. (Often, these elements feel as harrowing as the overt horror in his work.) Some of the sections featuring Alexander also reminded me of Richard Linklater’s gentler coming-of-age epic Boyhood, a film I’ve thought about recently while considering the greatest American movies of this decade.

Like Linklater’s film, F&A has an appeal that is well-suited to our modern sensibilities as ravenous consumers of serial television dramas. We’re more than used to sitting around and digesting longer stories, letting characters and conflicts distinguish themselves more gradually. Of course, Bergman isn’t fish-hooking us along with tense complications and cliffhangers. Still, Fanny and Alexander is engrossing and hard to turn away from. It’s a brilliant and tragic exploration of how families perpetuate their own worst habits which offers a wide spectrum of case studies in human frailty. -WINSTON COOK-WILSON

Would You Rather (Netflix)

With its clumsy income inequality metaphor baked into a stock B-horror plot, Would You Rather is basically a stupid movie. Its premise is right there in the title: a rich family decides for no reason that they’re going to host a game of “would you rather.” Apparently chosen because they have all been deprived of “a fair shake in life,” the game’s contestants are invited to dinner and forced to choose between various horrible outcomes in the hopes of winning a cash prize. For example, one might choose between taking a brutal beating and giving one out, or between stabbing someone else and stabbing themselves. Et cetera. The protagonist, Iris (Brittany Snow), needs the prize money to pay for her brother’s leukemia treatment, and is willing to do whatever it takes to save her family from poverty. Other guests at the party are played by Sasha Grey, June Squibb, and the dad from Home Alone.

While watching Would You Rather, I found myself thinking less about the substance of its plot and more about the many thousands of other people who have presumably seen this totally unremarkable movie.  Knowing my appreciation for claustrophobic, faux-allegorical horror movies like Cube, Circle, and Saw, Netflix has recommended it to me more times than I can count, and I assume the same is true for many other aficionados of scary movies and psychological thrillers. Like Brittany Snow, I eventually had no choice but to give in. There’s a place in this world for low-budget horror movies, and Would You Rather has moments of promise. Ultimately, though, it probably says more about Netflix’s secretive, hyper-targeted algorithms than about class relations. — WILL GOTTSEGEN

Seven years before Tyler, the Creator made Funkmaster Flex squirm by rapping about cuddling and butt sex during a recent Hot 97 freestyle that a prominent critic described as “staring into the heteronormative abyss and not flinching,” the Odd Future rapper visited Peter Rosenberg’s show on the same radio station with his then-crewmates Domo Genesis, Jasper Dolphin, Taco Bennett, and Earl Sweatshirt (freshly returned from Samoa). The young men rapped over one of the brawniest beats in vogue at the time: Lex Luger’s gothic instrumental for Jay-Z and Kanye West’s single “H•A•M.” Tyler yells comically loudly about bologna, Fuji water, and putting a “fuckin’ bundle of fuckin’ bananas in my fuckin’ ass.” Earl peppers in reaction ad-libs and takes hook duty, listing off the ingredients in a ham sandwich, counting each one on his fingers. At one point, Domo sprays six bars that conclude with “we ‘bout to go on a field trip,” prompting Earl to interject: “Hey, you’re so excited for that field trip, admit it.” Whenever the camera pans to Rosenberg, he’s either sighing or rolling his eyes.

The commotion over Tyler’s latest radio appearance provides a good excuse to revisit this older clip, which marks the first and most hilarious time the divisive rapper skewered the macho posturing and free labor of the radio freestyle ritual. It’s certainly not lost on Tyler that he is visiting a city whose hip-hop gatekeepers have long viewed his own with skepticism and often define hip-hop as a writerly dick-measuring contest. Tyler and Vince Staples’ freestyle on Rosenberg’s show in 2015 is a similar kind of gem. At one point, an unamused Vince shakes his head after the host excitedly announces he “just want[s] Tyler to do a freestyle to ‘No Time’ by Lil Kim.” “Y’all don’t understand. When you be askin n*ggas to rap, bro, like dang, I just made a 20 song album,” Staples explains. Tyler concedes, though, and raps about having a threesome with Vince. He wasn’t “out” in either moment, but he always knew what he was doing. -TOSTEN BURKS