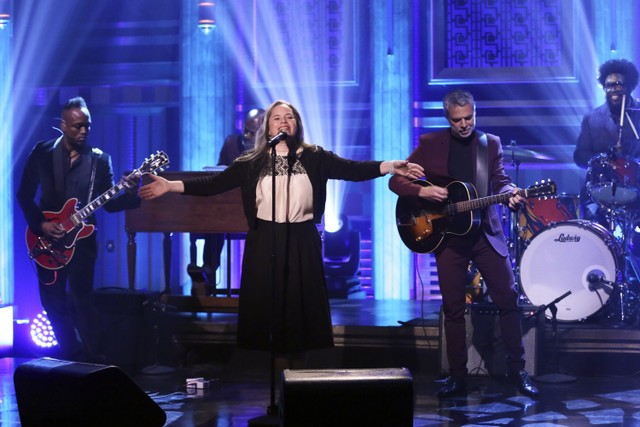 In all the ’90s retrospectives that have been going around lately, not too many people have been talking about 10,000 Maniacs, the hugely popular early-’90s college rockers, or about frontwoman Natalie Merchant, who launched a big solo career with the release of her 1995 debut album Tigerlily. (Check out Stephen Deusner’s Stereogum piece on Merchant’s legacy.) But Merchant isn’t going away. She just released a huge career-spanning box set called The Natalie Merchant Collection. And last night, she was on The Tonight Show, performing with a very different group of ’90s veterans.

On the show proper, Merchant, joined by The Roots, sang 10,000 Maniacs’ 1992 folk-rock single “These Are Days,” a song that got played at basically every ’90s graduation ceremony — or, at the very least, every pre-“I’ll Be Missing You” ’90s graduation ceremony. (I wonder if 10,000 Maniacs are still Chelsea Clinton’s favorite band.) “These Are Days” holds up pretty well! Merchant’s voice still sounds exactly the same, and she remains a whole lot of fun to watch onstage. The Roots handled the crowd-pleasing mid-song breakdown nicely. Jimmy Fallon came out at the end of the song to dance around while playing tambourine, which was an extremely ’90s thing to do.

Merchant also stuck around for an online bonus performance. Accompanied only by an acoustic guitarist, she sang “Motherland,” the title track of her 2001 solo album. It was pretty. Watch both performances below.

The Natalie Merchant Collection is out now. The 10-disc box features all of Merchant’s solo albums, as well as one new disc and one of rarities.