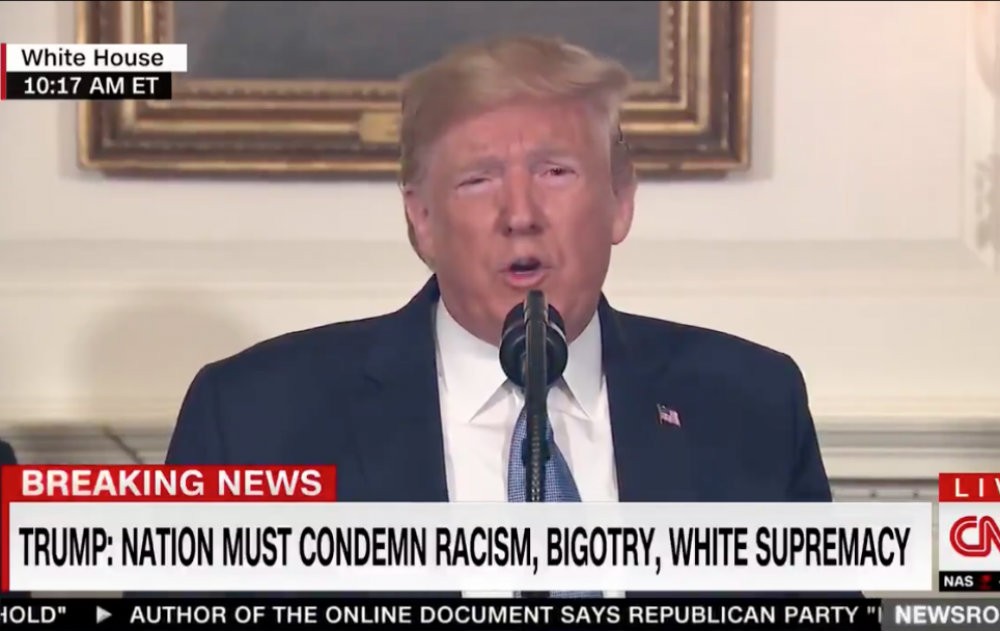 With an uncharacteristically sedate set of prepared remarks, President Trump spoke to the nation this morning following the two mass shootings that took place over the weekend in El Paso, Texas and Dayton, Ohio. Trump, however, expressed his condolences to Toledo, Ohio, a city 150 miles away from Sunday’s shooting in Dayton, which claimed the lives of at least 9 people.

“May God bless the memory of those who perished in Toledo,” Trump said. “May God protect them.”

“May God bless the memory of those who perished in Toledo”

It’s hard to tell exactly how the gaffe occurred, given that Trump appears to be diligently staying on script and not straying from the remarks presented to him on the teleprompter. Even if the wrong city had been written into the prepared statement by one of Trump’s speechwriters, wouldn’t any normal president not perpetually held hostage by their brain fog notice the error when the passage came up? The names of the two sites of mass murder occurring within 24 hours of each other seems like the kind of thing any competent leader would know before addressing the public. SPIN has reached out to the White House to ask how the mistake happened and will update if we hear back.

Trump has mentioned the wrong city before during public appearances, including once this past December when he told a law enforcement conference in Kansas City that he was happy to be in St. Louis. However, that was during a free-wheeling off book address, and not the kind of controlled public appearance where Trump’s words were carefully chosen before addressing reporters. The gaffe is perhaps more evidence that Trump’s speech writing staff, along with everyone else in his administration, really doesn’t give a shit about far right wing domestic terrorism and are just paying the tragedies lip service until the president feels comfortable demonizing migrants from Central America  again.

Holy Toledo, it wasn’t even on the TelePrompTer. pic.twitter.com/vviFo7vqMw