Why does being sad sound so good? There’s something about a performer under bright lights singing their naked emotions over a simple beat that stops listeners in their tracks, but pair those same sad songs with an up-tempo rhythm, and you’ll dance away the blues all night long. It’s an alluring juxtaposition Lykke Li lives, and one that’s set the general tone for the last two years of her career.

On 2018’s so sad so sexy, the Swedish singer-songwriter set failed relationships, confusion,  and inner turmoil against backbeats influenced by pop and hip-hop. A lot of the album was influenced by her recent move to Los Angeles and the fact that she collaborated with co-writers and producers including Skrillex, T-Minus, former Vampire Weekend member Rostam Batmanglij, and more.

As she took these songs on tour, she found there was yet more to share. And so in July, she released a six-track companion EP of remixes, alternative versions, and unreleased tunes, amusingly titled still sad still sexy.

The EP is part of Li’s commitment to be a more fluid and open creative, which may explain her concurrent collaboration on the title track of Mark Ronson’s hit album Late Night Feelings. She’s also busying herself with an upcoming festival performance at New Mexican art collective Meow Wolf’s Taos Vortex, and the organization of her own female-fronted event, Yola Dia.

SPIN caught up with the veritable superwoman to speak about giving her album new life, how she came to co-own a Mexican mescal company, and what creative spaces she’s floating into next.

SPIN: You must be quite the busy human. Besides having a small child to care for, you just released your still sad still sexy EP. Why was so sad so sexy calling for more love and attention?

Lykke Li: I would have done that for every album if I was in that space. Times are different. It’s so easy to release something now with streaming, and I just felt so connected with some of the songs. I started singing them in a more stripped-down way, and it resonated more deeply with me. I felt it would be a shame to not let those versions out. The remixes are just fun things. Why not?

I really love these stripped-down versions. “Deep End” in particular stopped me in my tracks. Are those similar to the way you perform them onstage?

Yeah. I do stripped-down for sure, and with festivals, I’ve been doing kind of like the intro of “Deep End” very stripped down with harmonies, and then I go into the other version, like a mash-up.

The new songs are actually so sad so sexy tunes that didn’t make the album cut, correct?

Yeah, but there’s a lot more songs. I finished [“Baby Doves” and “Neon”], and then there’s, like, 400 half-finished ideas. It’s about being more in the moment and not harboring so long on things; letting things go a bit more.

You mentioned in a different interview that you’re looking to be more of a stream of consciousness creator. Are you creating in that space currently? How else has that method affected your life?

Yeah, for sure. [Recently], I wrote a Swedish song, and I’ve just been writing songs based on my desires, my inspiration. I try to just follow that. I really know where I want to go next, and it’s definitely not where I was before. For me, having inspiration is the biggest part of my creating. If I’m not inspired, then I don’t want to do it. Somethings you let go. Some things take longer. It’s about creating always.

I always collect little notes. [A few days ago], I was supposed to go to the studio … all of a sudden, I have an idea. I recorded it on my voice memo, and then when I go in, it just unravels. I don’t necessarily have time [to create] unless I schedule time to go to the studio because I’m with my kid. 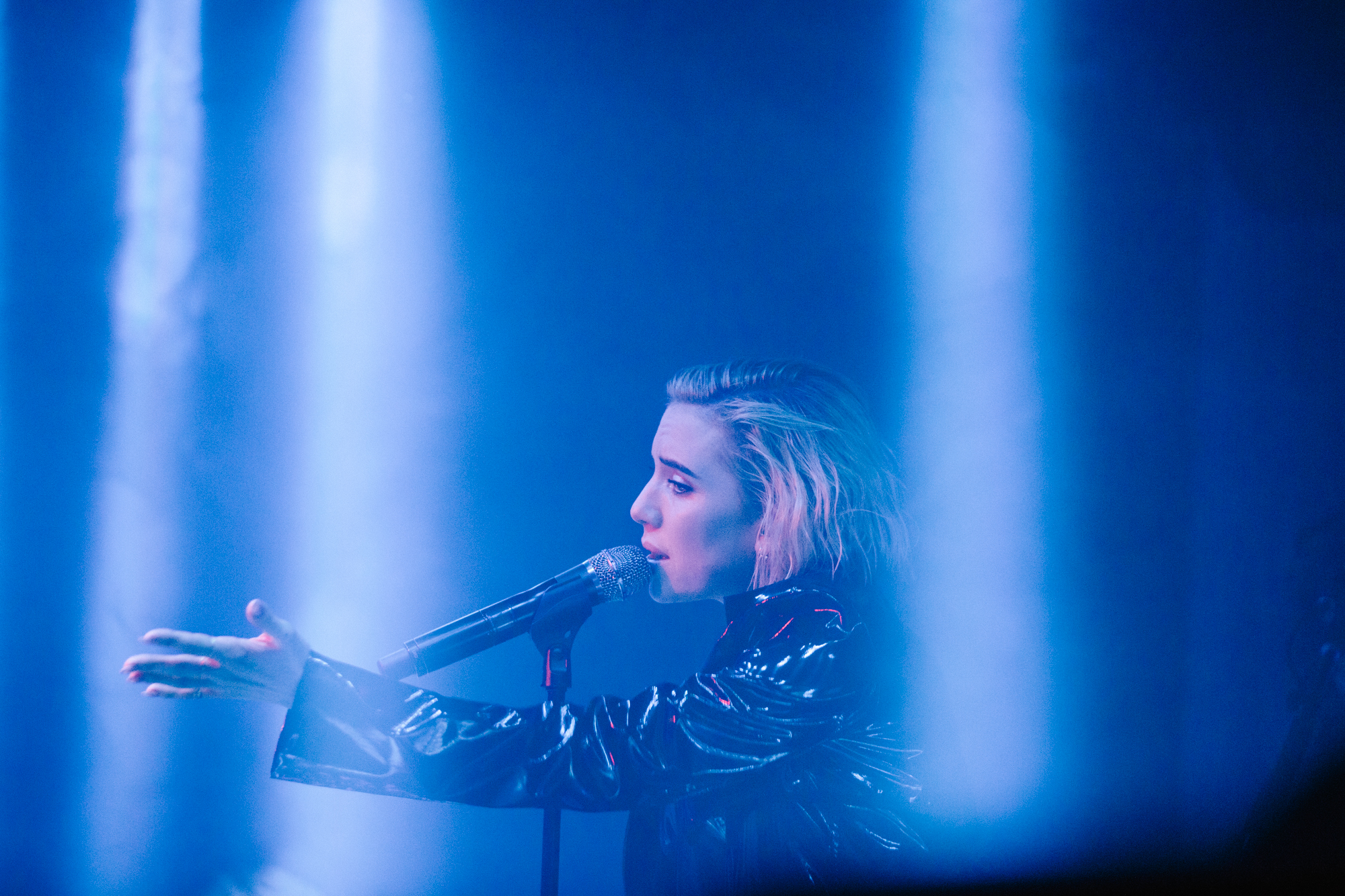 It’s always the same things. I love watching movies. I love reading. I just read Motherhood [by Sheila Heti], which I thought was really good. I’m reading Three Women [by Lisa Taddeo] right now. I think it’s interesting. And I just got my own house in L.A. That has really been so inspiring, to create a sanctuary that reflects who you are and how you feel. I’ve been traveling. I mean, I’m doing the same shit, doing shows. I like to not have a lot of things going on so I can just marvel at what’s around.

It’s like you to reflexively do something different than what you just did. Is there anything you can say about the direction you’re taking creatively or what it might sound like?

I’m going back to my roots. I’m more interested in intimacy and something organic again. I find that my references are always the same: one Ethiopian song from the ‘60s [a favorite artist being Emahoy Tsegué-Maryam Guèbrou], one gospel song, one hip-hop song, one folk song, but I’m really going to try to get to the roots of my heart and my soul and really not hide it. It’s going to be way more stripped back but also more dreamy, I think.

There’s power in such honesty. Is it hard to be so vulnerable?

No. That’s the only way. When I write, it’s like, “How open and accurate can I be?” That’s the only meter I have. For me, it’s embarrassing if it’s not real or open. I always want to cut through to the most raw form of emotion and personal information.

Going back to still sad still sexy, I understand the second take on “Two Nights” came from Skrillex having his own vision for the tune. Is that right?

Yeah. I played him “Two Nights” when it was only piano and vocals, and he was like, “Wow, this song could be something. Let me fuck around with it.” Some of his production I ended up keeping on my original version, but we would always come to a crossroads, like, “What is the chorus?” I’m like, “There kind of is no chorus,” and he was like, “This should be the chorus.” I did my version for my album, which was more cinematic with scenes, and then we have this version, and why not? People like to dance, too.

It’s the same thing. Everything just happens by coincidence. I heard some people were fucking with the track, making it more hip-hop. There’s so many versions floating around where people speed it down. It’s interesting to bring in more of that element.

With your album being titled so sad so sexy, you were kind of a go-to collaborator for Mark Robinson’s album. He kept calling it a collection of “sad bangers.” Strangely fitting.

That was great. I came in and they had a little bit of the song, the beginning intro or something. I came in and wrote the chorus. I named it “Late Night Feelings,” and that became the album title. … Once we had that thought, we were like, “Oh, this is the vibe. This is what it is.” That always happens. You find the center,  the main theme.

Have you guys worked together on anything else that might come out?

Yes, but I don’t know if I can talk about it. I hope we will work more, too.

You must have had fun with the “Late Night Feelings” music video.

It’s hard for me because I don’t do disco music, so I was like, “I think I have to create myself a character.” Her name is Sylvia, and she loves to drink and take drugs and is totally crazy.

You’ve also got this festival, Yola Dia, on August 18, that you’re helping put together, and it’s named after the mescal company you help run. How did you get into the mescal business?

It happened super organically. I went down to Mexico City, like, six years ago, and kind of fell in love with this girl called Yola. We went out a lot and drank a lot. I’d be like, “Mescal is amazing.” She’s like, “Oh, I have this company in Oaxaca from my grandfather that I took over.” She’s a mega-feminist lesbian, and she only employs women. I went down to the farm and I fell in love with the whole ethos of the brand. I decided, “Let’s take it to America as well. Let’s create a female empowerment brand where we only work with women, and we try to do something good while having fun.”

An opportunity to do the festival came. We always had parties where my friends would cook and some would sing. So we’re creating this festival where we’re celebrating women–but it’s not for women. Anyone can come, of course, but it’s female winemakers, mescal, food artists, activities.

We just said, “Who do we like, and who do we think is strong and cutting edge?” We started asking our friends to join. There’s a lot of people we wanted that are tied into doing other things, so we hope this can keep going, get bigger and bigger, and hopefully everyone will be able to say yes in the future.

You’re also playing Meow Wolf’s festival Taos Vortex on August 16. I’m excited to see what kind of environment they create. How are you feeling about that?

I’m bringing my spirituality as always, and I’m excited. I’ve been to Santa Fe before. My baby daddy’s family lives there, so it’s nice.

Is there anything else you want to add?

I just want people to really come to our festival and support. We talk so much about supporting the female movement, and I hope we can really do that now.