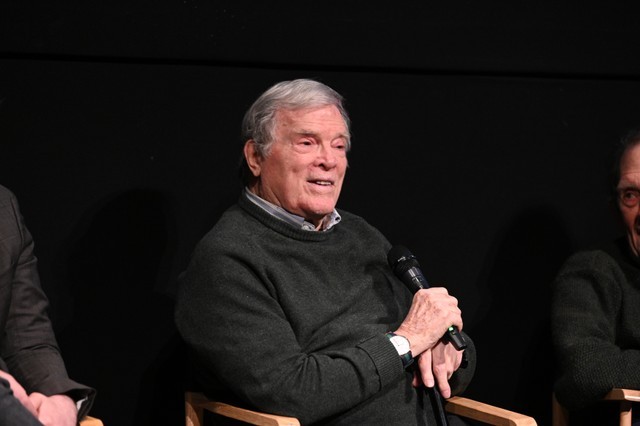 D.A. Pennebaker, documentary’s master of cinema verite who unassumingly brought viewers inside Bob Dylan’s mythical 1965 tour of England in Don’t Look Back and Bill Clinton’s 1992 presidential campaign in The War Room, has died. He was 94.

Survivors include his fellow documentarian and wife, Chris Hegedus, with whom he worked for more than three decades. They married in 1982.

“The very nature of film is musical,” he once said.

In the widely praised rock documentary Don’t Look Back, Pennebaker followed Dylan during his 1965 tour of England as the musician was making the eventful transition from an acoustic folk singer to an electric rock act.

“I was never interested in educating people about Dylan. … What I wanted to do was just be present when Dylan enacted his life and show you what he deals with and what interests him,” he once said.

Regarding Dylan’s reaction to the film, Pennebaker told Time in 2007: “He saw it out in Hollywood at a dreadful screening. Afterward, he said, ‘We’ll have another screening and I’ll write down all of the things we have to change.’ Of course, that made me a little gloomy. The next night, we assembled again and he sat in the front with this yellow pad. At the end of the film, he held up the pad and there was nothing on it. He said, ‘That’s it.’”

For The War Room, an Oscar nominee for best documentary, Pennebaker and Hegedus examined Clinton’s 1992 presidential campaign against incumbent George H.W. Bush. Since the filmmakers didn’t have access to Clinton himself, the project focused on the political strategies orchestrated by campaign manager James Carville and communications director George Stephanopoulos.

War Room is credited with making stars out of the two. Carville has had guest appearances in a number of films and TV shows (The People vs. Larry Flynt, Old School, Mad About You) and was the political adviser to Hillary Clinton during her 2008 presidential campaign, and Stephanopoulos hosts ABC’s This Week and is the co-host of Good Morning America.

The popularity of that documentary spawned a sequel, The Return Of The War Room (2008), which reunited the original participants to reflect on the then-current landscape of American politics and political campaigns.

Despite the acclaim of both films, Pennebaker never ventured into another war room. “You kind of hesitate to go back,” he told The New York Times in 2008. “Anything you do will be compared with the original, and you could never do it better.”

Pennebaker also was known for Company: Original Cast Album, which documented the grueling 18½-hour recording session for Sondheim’s Tony-winning Broadway musical. The film famously featured star Stritch having an emotional meltdown during her recording of “The Ladies Who Lunch.”

Reflecting on her frustrations in the film, she told the Los Angeles Times in 1992: “The only thing that was on my mind was that I just couldn’t get that damned song right. It’s such a hard number to do in a recording session — to get the full meaning of those lyrics across. You can’t come on that strong, as you always tend to do when you’re tired. And I was tired. I was exhausted. I looked like Margaret Rutherford doing the life story of Judy Garland.”

According to executive producer Craig Zadan, interest in Pennebaker’s documentary was so strong that at its premiere at the 1970 New York Film Festival, “mobs of outraged theatergoers were turned away after waiting in line for several hours. Festival officials panicked, the police riot squad was summoned and a second showing had to be scheduled.”

Because of legal issues, the film did not find distribution until 1992, when RCA Victor Video released it on home video.

Donn Alan Pennebaker was born July 15, 1925, in the Chicago suburb of Evanston, Ill. “Penny” served in the Navy and attended Yale, graduating with a degree in mechanical engineering.

After deciding against becoming an engineer, Pennebaker directed his first film, the five-minute short Daybreak Express (1953), in which he made the grubby elevated trains of New York City and their on-the-go occupants appear bewitching.

“I wanted to make a film about this filthy, noisy train and its packed-in passengers that would look beautiful, like John Sloan’s New York City paintings, and I wanted it to go with my Duke Ellington record Daybreak Express.”

In 1959, Pennebaker joined Robert Leacock, Albert Maysles, Terry Filgate, and Robert Drew at Drew Associates, the producers of the Time-Life series Living Camera. He worked on such Living Camera telefilms as ABC’s Mooney vs. Fowle, which captured the 1961 Florida state high school championship game between Edison High and Miami High at the Orange Bowl. It won the top award at the 1962 London Film Festival.

Leacock Pennebaker went on to produce Don’t Look Back as well as distribute such films as Monterey Pop (1968), a look at the 1967 Monterey International Pop Festival that featured career-launching performances by Joplin and Jimi Hendrix. Incredible as it now sounds, the company had a hard time distributing it.

By the mid-’70s, he and Hegedus began to co-direct films and formed Pennebaker Hegedus Films, with Pennebaker’s eldest son, Frazer Pennebaker, as their producer. They made such documentaries as Depeche Mode 101 (1989), capturing the band’s 101st (and billed as their final) concert, which was held at the Rose Bowl in Pasadena.

Their collaborations also included the Emmy-winning Elaine Stritch At Liberty (2004), another intimate portrait of the Broadway legend, and Kings Of Pastry, the 2009 film about the Meilleur Ouvrier de France competition.

On his documentary technique, which never used a voiceover narrative nor included interview questions from the narrator, Pennebaker explained: “I’m trying to be [the playwright Henrik] Ibsen. That’s my secret hope: that I could somehow turn into Ibsen. There are things happening all the time to real people. You don’t have to enact them or write them. I’m trying to make a play, not an educational device.”

At the Governors Awards in November 2012, Pennebaker received his honorary Oscar and dedicated it to his wife.

“The person that I have to thank the hardest is the love of my life, Chris. … She and I have made a lot of films together. When we make films, when shooting them, you’re great friends, because there’s nothing but problems to be solved, so you’re pals. … And then you sit down at the editing machine, and it all begins — you get divorced about four times a week.

“But you know it’s a process. Even though you’re practically choking each other to death over each editing decision, there’s nothing in the world I love better than doing that with her.”